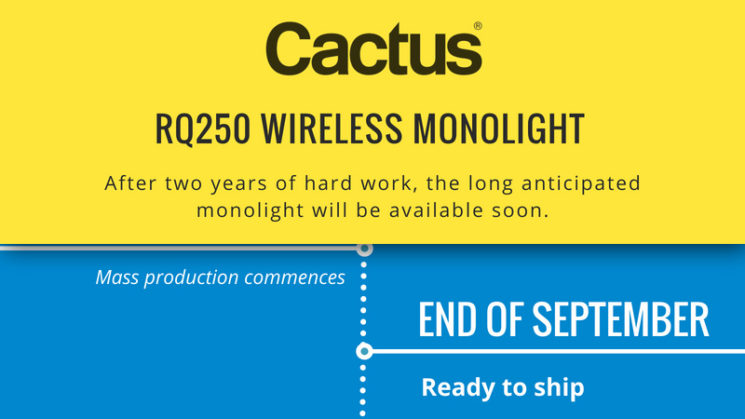 Quite a few photographers, particularly Pentax shooters, have been getting very excited about the new Cactus RQ250 battery powered strobe. Announced earlier in the year, and shown off in person during The Photography Show, the RQ250 is a pretty nice and compact little unit. The benefit for Pentax users being that they finally have a strobe that supports TTL and high-speed sync.

Until now, though, a price and release date has not been announced. Well, we still don’t have a price, but Cactus has posted an update to their Facebook page announcing an approximate release date. According to this post, we can expect the RQ250 to start shipping at the end of September.

According to the post, right now they’re in the finalising stages for the RQ250 design. Next month, test production of the RQ250 and modifiers begins with beta testers getting their hands on them early. Pre-orders begin at the end of July, with final adjustments in August followed by mass production and shipping at the end of September.

I do wonder if a little wind might have been taken out of Cactus’ sails with the news that Godox is working on Pentax compatibility with their flash system. Of course, Pentax isn’t the only brand with which Cactus works. The Cactus X-TTL system also works with Nikon, Canon, Sony, Fuji, Olympus, Panasonic, and Sigma.

Even though Godox doesn’t support Sigma, they aren’t quite the big player that Pentax is when it comes to cameras, so Pentax was the major advantage Cactus had over Godox with this release. With Godox now adding support for Pentax, that’s a potentially large chunk of Pentax owners that might now pursue a different brand instead of Cactus.

Regardless, it still looks like a great little strobe from my brief time playing with the prototype.