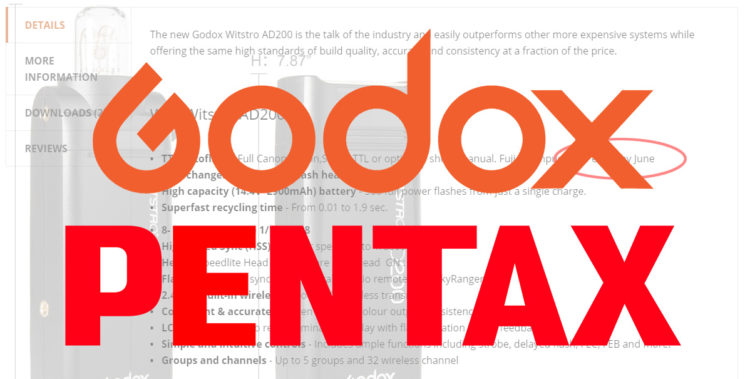 Pentax users seem to have been neglected when it comes to the world of flash. There’s been very little 3rd party support at all. Pretty much their only option, if they want TTL or High-Speed Sync is to go the Cactus route if they don’t want to go with Pentax branded speedlights. Ok, you could go with Metz, but your options become even more limited with those if you want to combine it with strobes.

It seems, though, that Godox may have listened to the cries for help from Pentax users. According to a listing on the Godox UK online store for the dual AD200 kit, Pentax TTL support is coming sometime in June. Yes, this month. Or, maybe next year. 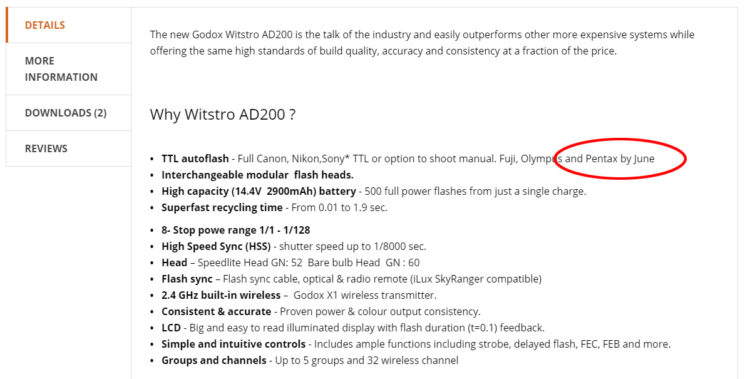 The screenshot above (live listing here) doesn’t say which June, exactly. Just as they didn’t say which September when they said the Godox A1 Android App would be getting released (we’re still waiting, Godox!). So, we’re just assuming they mean June 2018. And as we’re already almost halfway through June, they’ve only got just over a couple of weeks left to release something to meet this stated date.

But, whether it does come now, or in a few months, it does suggest that Godox is actively working on Pentax TTL & High-Speed Sync support. Possibly with new X1T-P and XPro-P Pentax triggers as well, along with new firmware for existing flashes. The current Godox firmware list doesn’t mention Pentax at all yet.

With the Cactus RQ250 coming out at some soon point, though, many Pentax users will hold out and stick with Cactus. But, I know quite a few Pentax shooters who are shooting dual format (mostly Pentax & Sony) so that they have a different camera system for when they want to use flash – even though they prefer shooting Pentax. Mostly they use Godox with that other camera system when they need TTL or HSS. So, hopefully, they’ll stop moaning to me soon that Godox doesn’t support Pentax. ;)

As there’s been no official announcement (although Godox rarely tends to actually announce things, they just appear one day) we don’t know for sure if the June date is correct, or if they’ll deliver on time. But we’ll be sure to let you know when there’s something more concrete.

Update: 14th June. Pixapro, the UK Godox distributor has confirmed to DIYP that a Pentax XPro trigger is coming, but that Godox has not yet announced a release date.