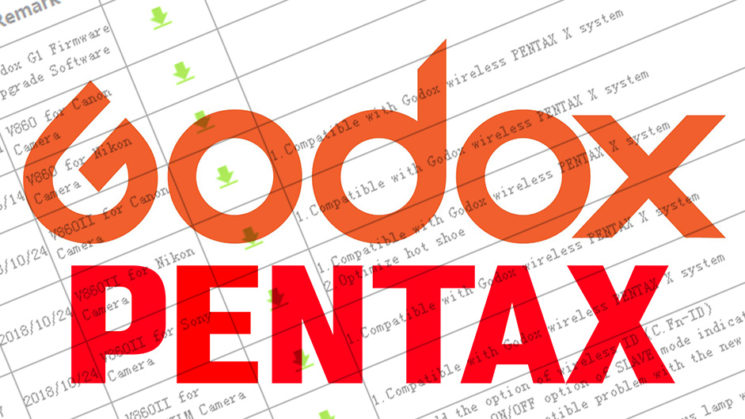 It feels like forever ago since I posted about the new Godox XPro-P flash trigger for Pentax. But it’s actually only been about three weeks. When I went out to test it, I only had the opportunity to really use it with the AD400Pro. We had other lights with us, though, which we tested to varying degrees of success.

Today, though, Godox has released a number of new firmware updates to add Pentax support to a bunch of their other lights.

So, first up, the speedlights. The Godox TT600 I tested for the review doesn’t support TTL, but it had no problem dealing with high speed sync already. So, I imagine we’d see the same from the V850II, as it’s essentially the same light but with a different power source. There have been no updates for the various TT685 models yet, but the lithium-ion-powered speedlights have all received one.

The code in brackets after each unit, either G1 or G2, is the firmware update app you’ll need to apply it to your device.

When it comes to strobes, the AD400Pro, AD600Pro, AD600BM and AD600TTL already fully supported Pentax. The Pro models had Pentax support right out of the box, and the 600BM and TTL models received a firmware update a couple of months ago. But, there’s that one light that everybody keeps asking me about and, yes, it’s finally here!

Surprisingly, there doesn’t seem to be an update for the Godox AD360II N or C models, although I have been told they’re on the way at some point in the future. There’s also no firmware update for the Godox X1R receiver yet, either. So, if you were hoping to use your Nikon, Canon or other system speedlights on Pentax, you might have to wait a little longer.

You can check out all of the Godox firmware updates for all of their devices on the Godox website.