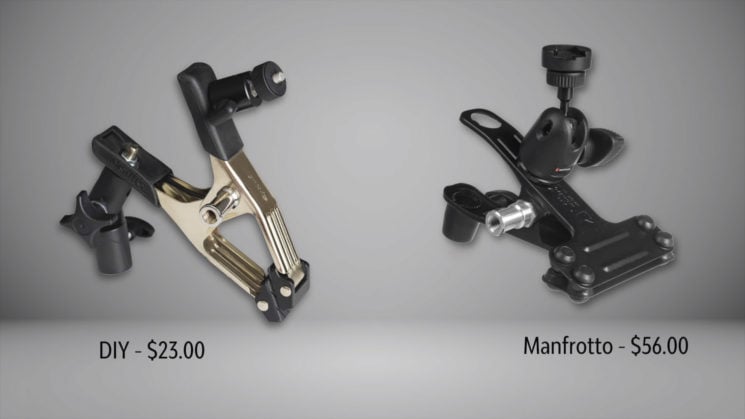 Originally made to help Joe McNally solve problems that would occasionally pop up on shoots, the Justin Clamp has become a popular addition to many photographer kit bags. It was created by Bogen/Manfrotto employee Justin Stailey from some standard off the shelf components. It served its function perfectly, so it became known as the Justin Clamp we still have today.

While excellent, they’re not exactly cheap. A handful of these in your bag can set you back a couple of hundred bucks. Another Joe, photographer Joe Edelman, has different solution, though. A DIY option that costs about half of the original Manfrotto (less if you shop around), and it seems to be a very good substitute.

Looking at it, there’s no reason why it shouldn’t work just as well as the original for most applications. It can easily handle the weight of a speedlight or hold a bounce card or reflector. But let’s have a look at the basic components…

You’ll also need a 1/4″ drill bit (that can go through metal), a few washers and some 1/4-20″ nuts and bolts. You may want to go with locking nuts or get yourself some Loctite Blue Threadlocker. 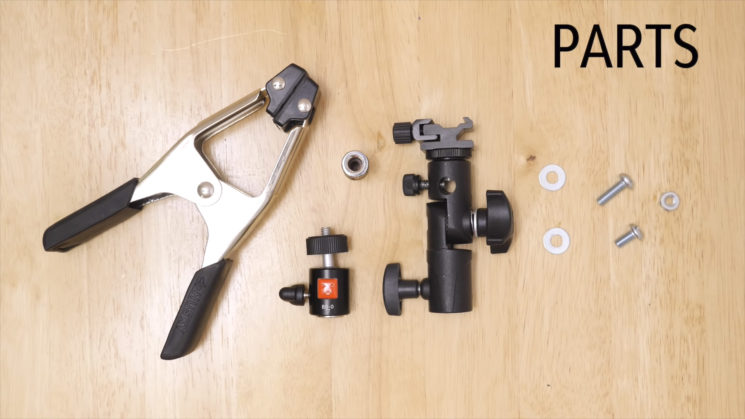 The construction is pretty straightforward. You’ll need to drill four holes in the clamp. One on each side of one of the jaws where they pivot, and then one on each of the two ends.

A 1/4-20″ bolt goes through one of the holes in the side and a 1/4-20″ to 3/8-16″ spigot adapter is screwed into that. The hole on the opposite side is for a screwdriver to hold your bolt while you tighten with pliers on the spigot adapter. Another 1/4-20″ bolt goes through one of the handles and screws straight into the bottom of the ball head. Removing the cold shoe from the umbrella bracket reveals a 1/4-20″ thread that you can slot through the hole in the other handle, and tighten this down with a nut. 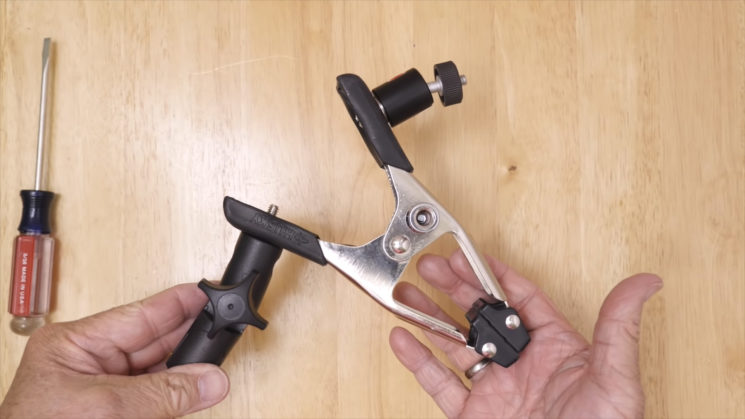 Exactly how you’ll use it will depend on your needs. Joe provides a number of examples in the video. You could use the umbrella bracket mount it to a light stand and hold a reflector or flag. Or you could clamp it to something using the haws and mount a speedlight to the ball head. Or perhaps a GoPro for shooting behind the scenes.e

Ultimately, it’s a versatile tool that has a great many potential uses on set. That’s why the Justin Clamp has become so popular. But if you want to save a little money and have 10 minutes spare to make one, this DIY option should easily satisfy most of your needs.

9 Super-Useful Real-Life Uses for a Clamp

« Everest – A time lapse film II: How I did it
Pentax TTL support for Godox accidentally exposed on product description »