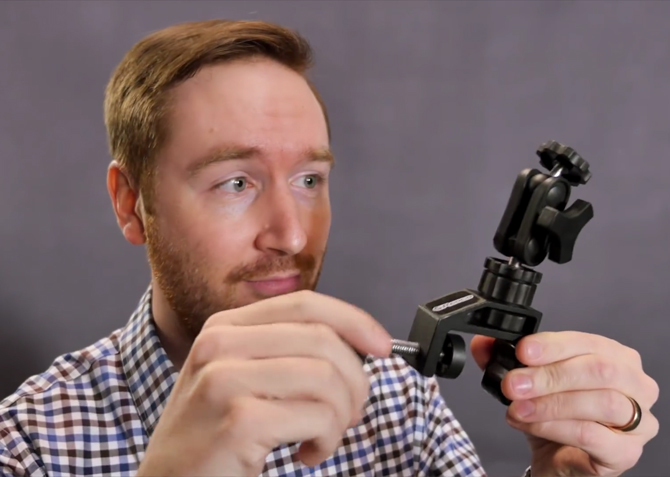 A clamp is one of those few pieces of gear that will divide your life in two; before and after you got one.

Ok, that might be a bit of an exaggeration but it really is a must-have piece of kit in any photographer’s or filmmaker’s camera bag.

In this next video Griffith Hammond shares with us nine of the ways he uses the ‘most versatile piece of gear’, the clamp.

Rather than just compile a list Griffin shares with us examples from various assignments, including some he did for Bloomberg. These are all real life scenarios that will help you realize you need one (or another one) of these in your bag as well.

1. Turn Any Light Stand Into a Tripod

I’ve done this a bunch of times. Perfect for when you need another tripod, or even if you just want to mount to camera on the same tripod. 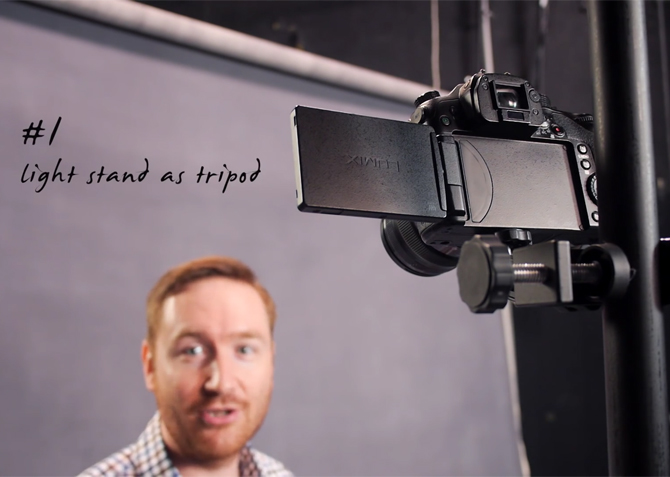 Same as the above, but for those days when you don’t even have a light stand. As Griffin shows, in this case it gave him a second camera angle using his GoPro.

Last year I had a shoot at a large shopping center that is infamous for giving photographers a hard time, so I called in advance to alert security and obtain written permission from management. As soon as I mentioned I’d be shooting with a static camera the woman on the other end of the phone said something in the lines of “sorry, we’d love to help you but we don’t allow tripods”. As she was about to happily hung up the phone and chalk up another frustrated photographer on her board, I told her that was fine by me. She sounded a bit disappointed to hear about my workaround, but there was nothing she could do to stop me. (evil laugh)

3. Excellent For Rides and Small Spaces

Shooting in a place where tripods aren’t allowed? Perhaps there physically isn’t space for a tripod? No problem, the clamp is here to save the day.

Even if you do have a tripod that can be set up really really high, it’s often easier and safer to use a clamp to mount your camera high up. 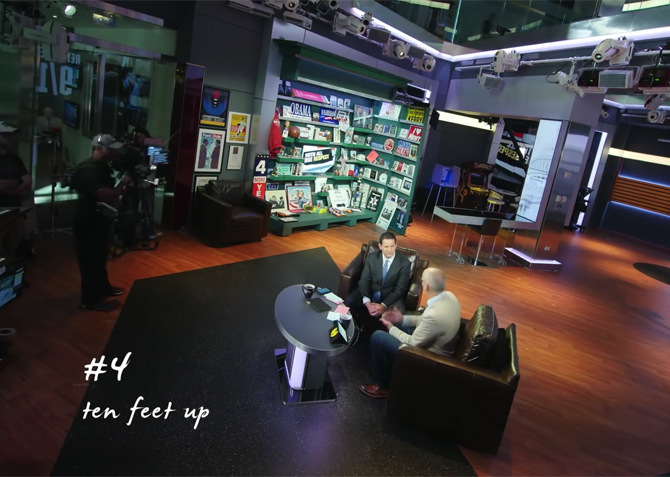 Simple, easy and works well. Position your audio recorder perfectly without it getting in your way. 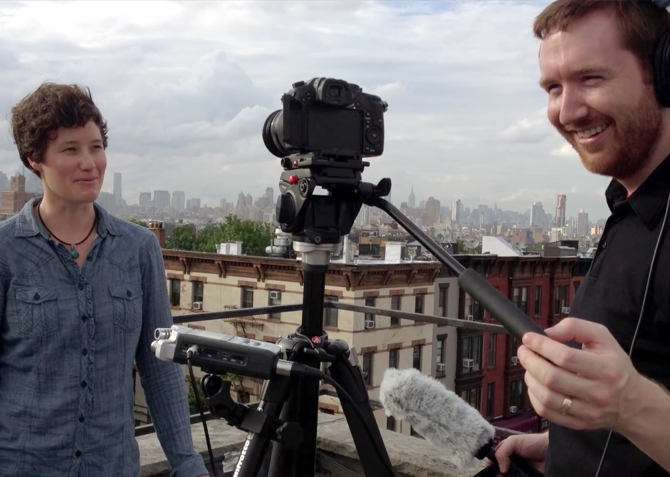 6. Music Stand as a Mic Stand

Similar to the camera on a light stand, this is another great tip for the filmmakers among us. 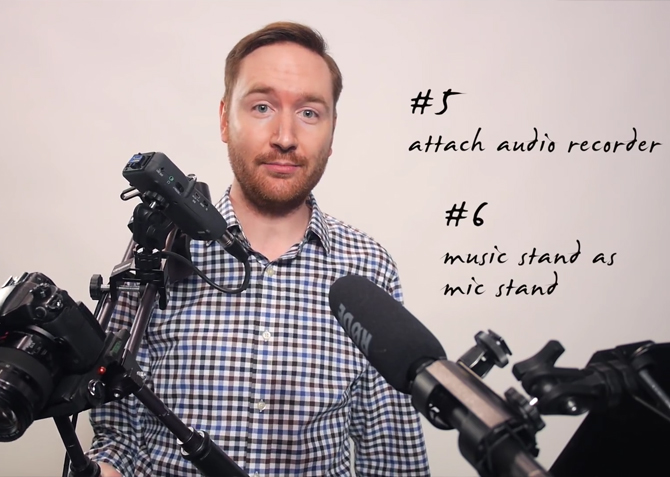 Perhaps not the ideal solution, but it definitely gets the job done. Griffin shows how he used a clamp as a counterweight during an interview with Donald Trump. If he can do this working for a company like Bloomberg, to record an interview with a presidential candidate, there’s no reason why you shouldn’t try it out as well. 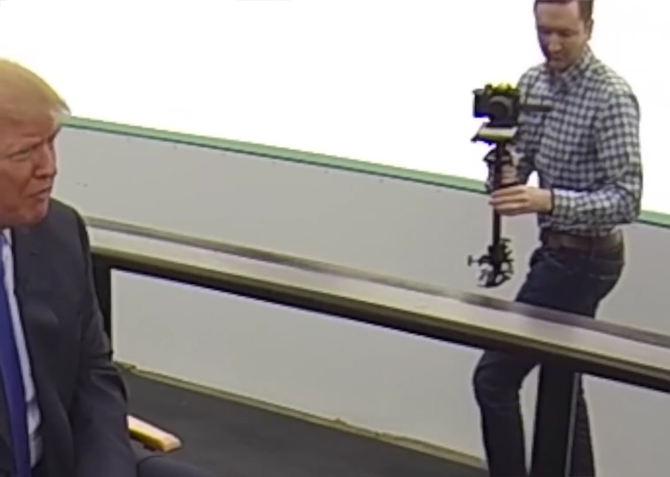 During the same interview Griffin used a clamp to attach a GoPro to a light stand and get some BTS footage. Once you start looking around, you will notice that almost wherever you go there’s place to stick a clamped GoPro. 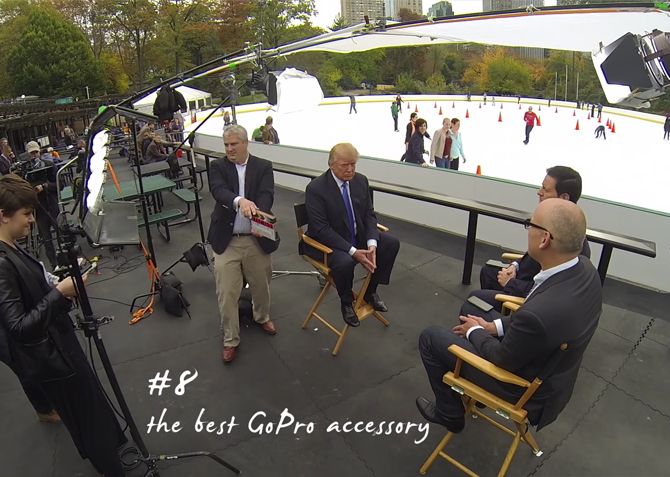 9. Even On a Zamboni

The BTS interview shot was set up in advance, but a clamp is so unobtrusive and easy to set up that you can have your camera set up and ready to go at a moment’s notice. 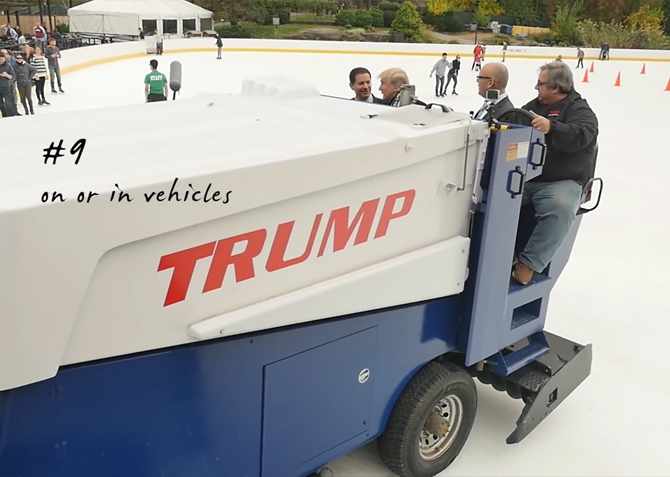 The clamp Griffin shows in his video is a $22.95 Pedco Ultra Clamp, and what’s really nice about it is that it has its own swivel mount, so no ball head is needed.

Personally I’m a big fan of the Mafrotto 035 Super Clamp, and while it weighs at least twice as much as the Pedco, it can handle a whopping 15kg (33 lbs). That’s right, it’s more than most tripods can handle!

The downside of the Manfrotto clamp is that some of the weight capacity will be spent on the tripod head you’ll want to attach to it, but there’s plenty to spare. It will also set you back a bit more ($30), but the thing is built like a tank. I find the extra cost and weight are worth the peace of mind when attaching anything heavier than a GoPro.

If you’ve already got a clamp, what are your favorite uses for it?

Use a DIY Super Clamp For Shooting in Confined Spaces

Getting Creative With A Master Clamp — Are They The Ultimate Multipurpose Photographers Tool?