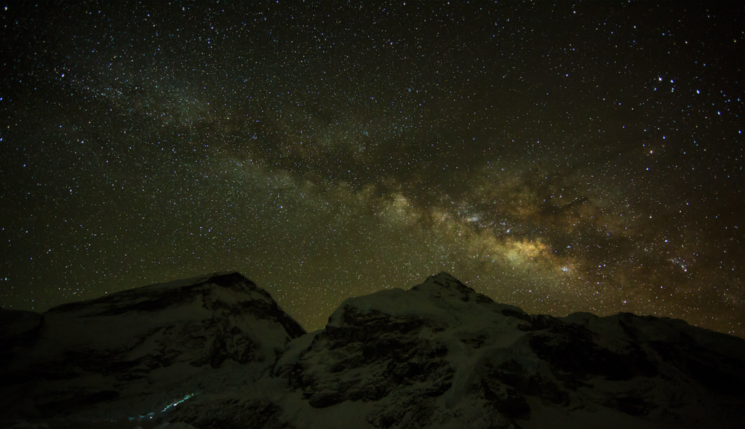 I’m once again truly humbled to see that my new short: Everest A Time Lapse Film – II is captivating audiences around the world. As always, my goal is to bring to life the majestic beauty of the Himalayas and to inspire others to dream big, discover their passions and explore this beautiful planet we inhabit. Everest and the people of Nepal have given so much to me and this is a very small way of giving something back.

In 2005, I embarked on a journey to Mt. Everest basecamp as young aspiring adventure filmmaker. I’d never really traveled, I’d never visited a 3rd world country and I had never even slept in a tent. That first journey to Nepal changed everything. My friend Dr. Sean Egan, who was aspiring to become the oldest Canadian to climb to the highest point on Earth, who also happened to be the subject of the documentary I was shooting, tragically died of heart failure and never made it to the summit of Everest. It was shocking and devastating. In an attempt to honour his life I decided, never having climbed a mountain before, that I was going to climb Everest in his honour, carry his ashes to the summit and complete the documentary. In 2010, after two attempts on the summit, I finally made it to the top of the world. 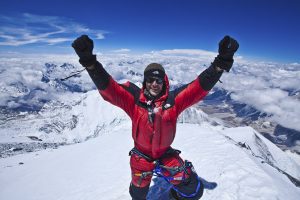 Since then, I’ve returned to Nepal 13 times. I’ve been on 7 Everest expeditions, I’ve failed twice just 500ft from the top, survived two avalanches and an earthquake and stood on top of the world twice, in 2010 and 2013. Every time, with cameras in hand. Perhaps the most meaningful experience of them all was sharing my first summit journey with 20, 000 Canadian students who followed the journey virtually, every step of the way, from the safety of their classrooms. We created a real-time web series and essentially shot, cut, connected with students in their classrooms via Skype daily from as high as 26, 000ft at camp 4. In the end, we made it to the summit in person and virtually – Sean’s spirit with us.

It goes without saying that I’ve fallen in love with Nepal, her beautiful people and her majestic mountains. My latest short film is the culmination of over a decade of shooting in the Himalayas and on Mt. Everest.

What were some of the challenges of shooting Everest – A Time Lapse Film – II?

What were the highest altitudes these shots were captured from?

What are those glowing lights we see and what is the Khumbu Icefall? 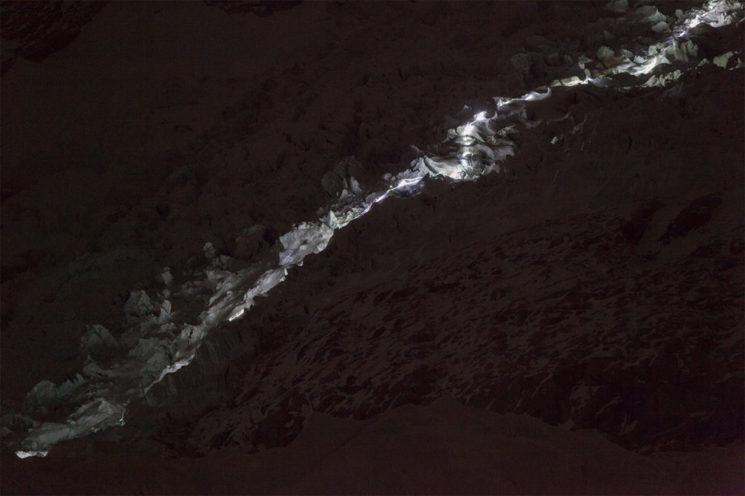 The Khumbu Icefall is a flowing river of ice that moves at the rate of 1 meter per day. It’s deadly, unforgiving and happens to be the gateway to Everest. It’s littered with open crevasses that you need to negotiate by crossing suspended ladders that the Sherpas carry and put in place. The glowing lights we see at the foot of Everest in some of the shots are climbers navigating and negotiating the seracs, crevasses and ice cliffs of the dangerously unpredictable gateway to Everest. 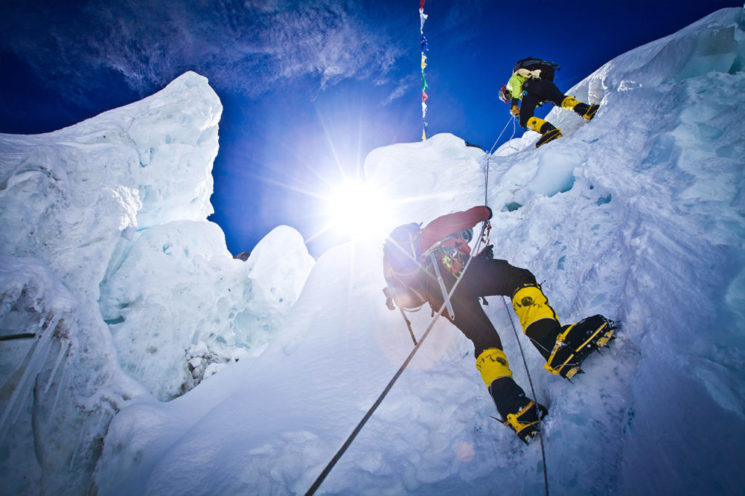 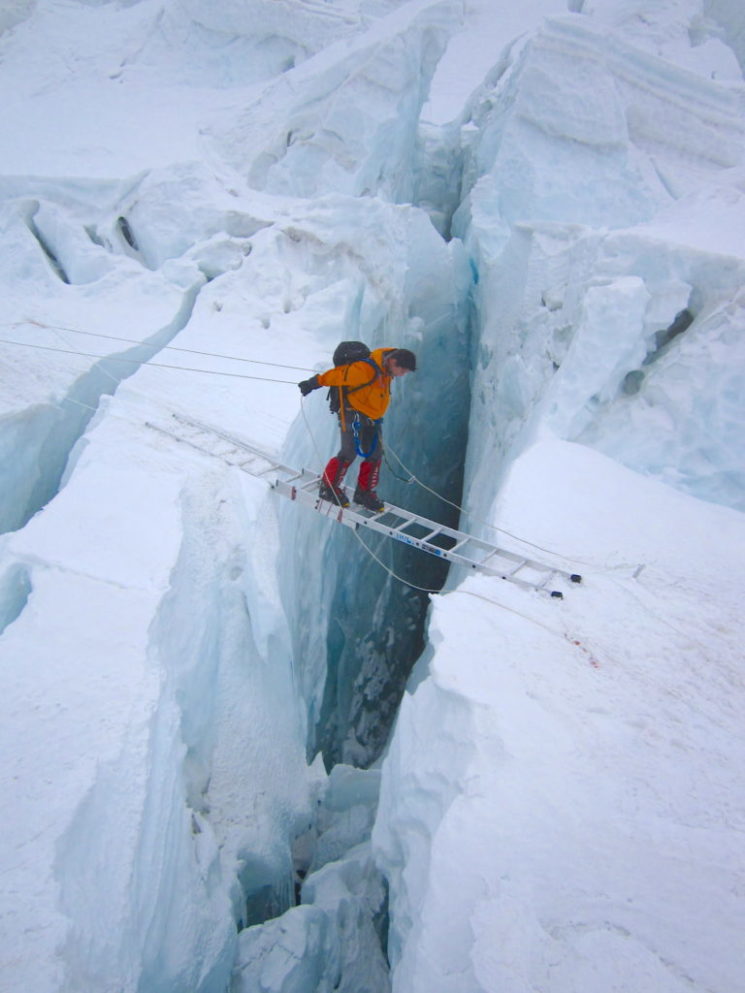 The Icefall by far the most dangerous obstacle on Mt. Everest and you must cross it in order to reach the upper part of the mountain, including camp 1 and 2.

The secondary obstacle worth noting is the fact that we had to summit a 6,000m mountain to gain access to some of the shots you see of Everest – both at the beginning and end of the video. This required full expedition gear: ice axes, crampons, ascenders, fixed lines, etc. Below is an excerpt from my blog:

“We climbed high above the clouds to 6,119m and set up camp for three nights on the summit of Mt Lobuche East waiting for a glimpse of Everest from one of the best ‘camp spots’ in the Himalayas. We patiently waited for two nights for the skies to break and finally, they did. A golden wash of light splashed across the world’s tallest peak as 4 Canon DSLR’s clicked away. By midnight, there were electric storms to the north/east in Tibet and unfortunately we never had a chance to capture the Milky Way as the clouds eventually came in, but not before capturing the dancing stars and the vibrant purple and green hues of the wondrous night skies above the Khumbu and Everest region. 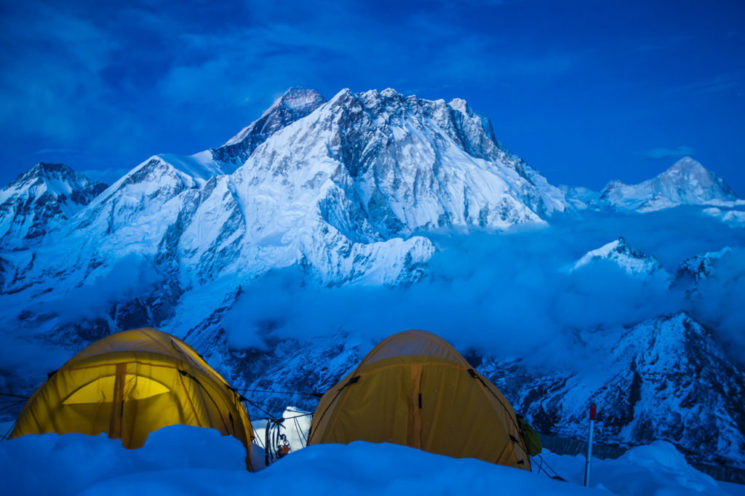 The altitude has a debilitating effect on the human body and so it becomes a substantial effort on the part of many to establish this camp, carry the gear to the summit and camp out up there long enough to bring back some of these images. We used stoves to melt the snow and feasted on dehydrated meal packs (think pasta in a bag) and noodle soup.

What gear did I use to shoot this?

All Canon cameras on this one. Canon Canada was kind enough to lend me some of the equipment below. I use Canon because of their weather sealing and I happen to be a big fan of the aesthetics. I’ve been to the summit of Mt. Everest twice and have seen many cameras (and cameramen!) fail up there. The 5D Mark 3 is a beast and a workhorse at extreme altitude and in the cold. I went with what I knew and what I was certain would withstand the elements while producing outstanding images.

What software and gear did I use to edit this together?

All of the images were processed on location while at Mt. Everest basecamp at night, under a headlamp, with a down-jacket on and in -25c temperatures.

The original resolution of the images are between 5-6K

How many still images did I capture and how long did this take?

How did you keep the batteries warm?

Who was on your crew?

I worked closely with my friend and camera assistant Pasang Kaji Sherpa on this project. He was my right hand man in making sure I had what I needed to pull this off. We hired a small team of porters who work with me year after year, men I consider great friends. I have trained them to work with my cameras and lenses and compensate them all very well for their time. I also do my best to make sure we’ll all having a blast during production. 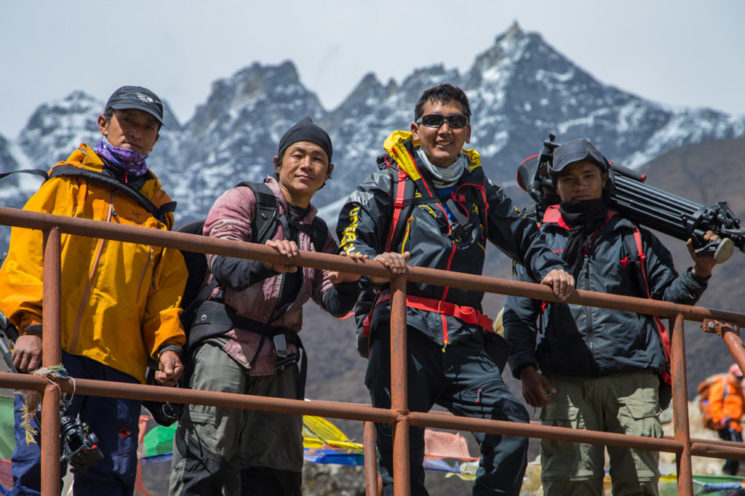 What locations are these images shot from?

Can you share some of your settings with us? 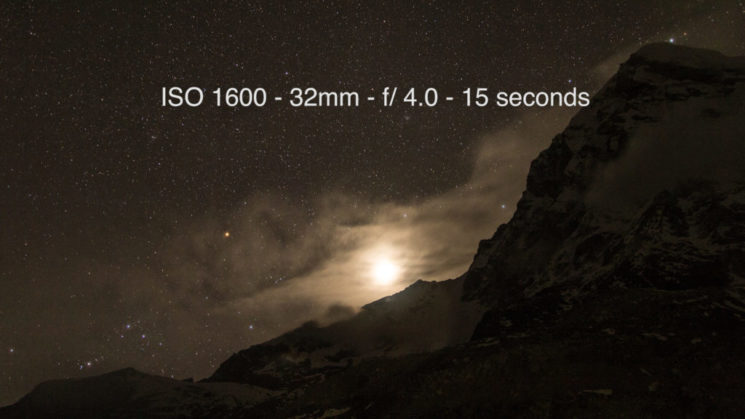 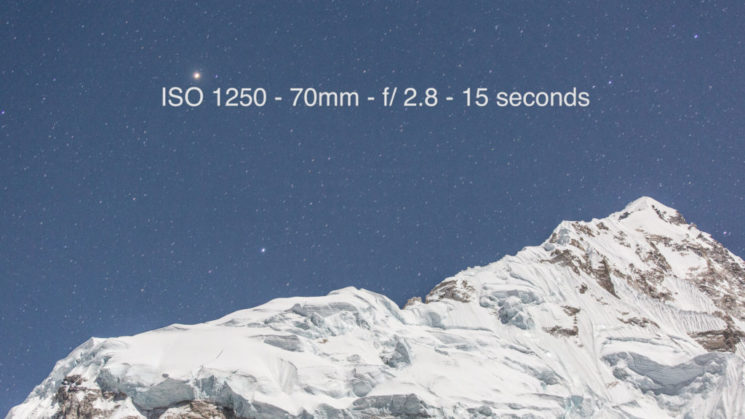 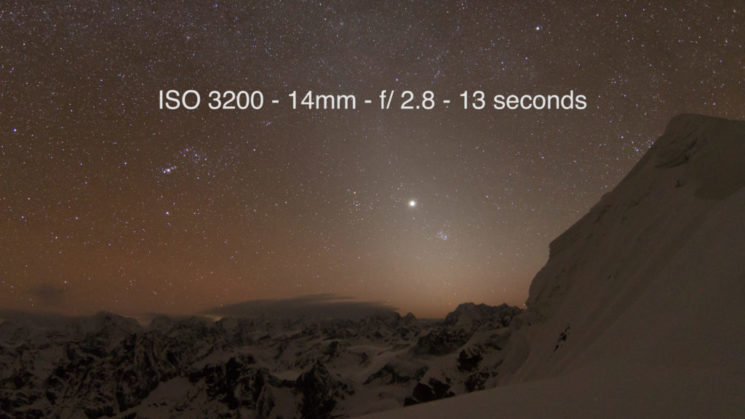 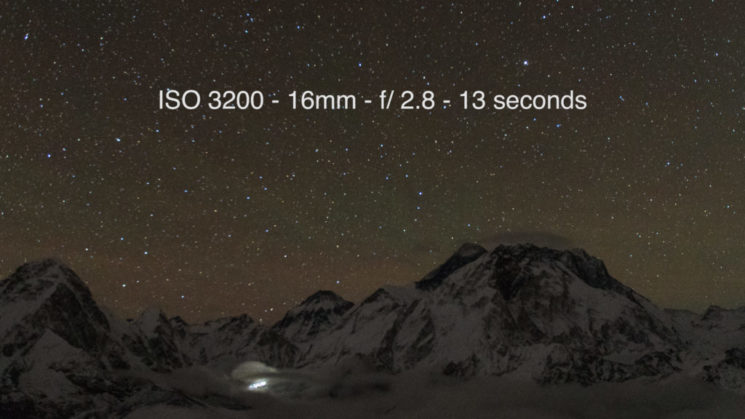 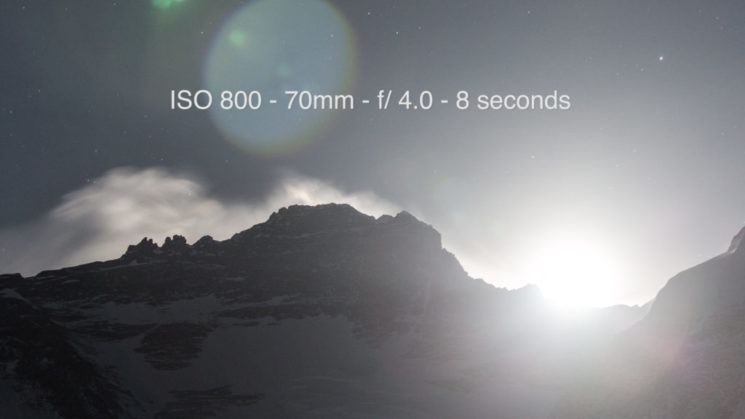 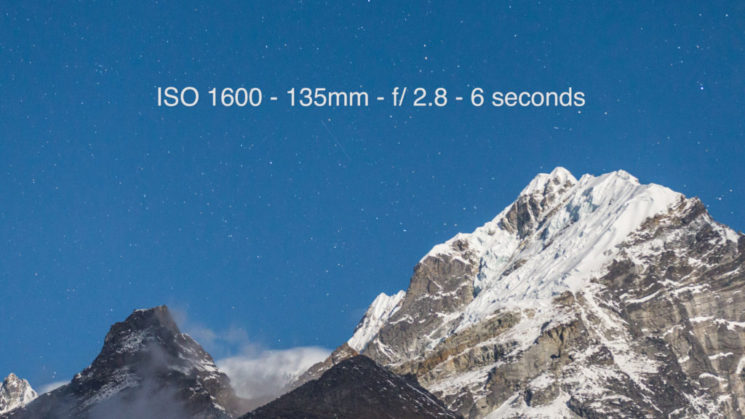 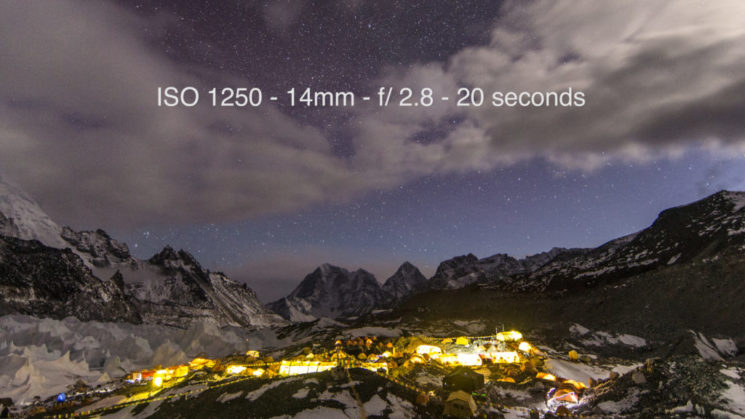 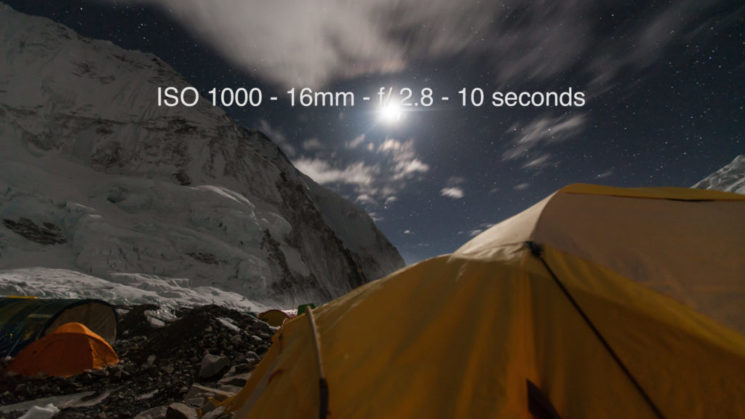 Any tips on how to capture the Miky Way at Mt. Everest basecamp?

The magic happens around 2am at Everest basecamp.

What would we never know about this film by watching it?

I’ve kept these images hidden for almost 4 years. They were created in 2014 and 2015 – the two deadliest seasons in Everest history. Many lost their lives and I was at ground zero both years. I’m not sure I’ll ever un-see what I saw in those two seasons both during and after the avalanches. Somehow I felt keeping these images hidden showed respect for the fallen. The images at camp 2 were created right after the 2014 avalanche that claimed the lives of 16 Sherpas. We were trapped above the area where 16 died at Camp 1 and 2 and had to remain in place for three days, unable to assist in the evacuations. Shooting the night skies helped with the helplessness we all felt. In 2015, much of what you see this video was captured days before we got hit by the avalanche at basecamp during the Earthquake. No one can ever be prepared for such devastation. It’s taken a long time to work through the loss and perhaps somehow, releasing these images is my way of fully letting go and remembering the beauty, the wonder and freedom that comes along with climbing the world’s tallest peak.

Any final words for an aspiring adventurer or creator?

I’d say that the magic of today’s technology is that we can all create films like this with very minimal technology. An affordable DSLR or mirrorless camera, a decent lens, an intervelometer and some processing and editing software is all that you need. What’s also required is the willingness to travel outside of your comfort zone into these kinds of beautiful environments. 13 years ago I had never even slept in a tent and look where I ended up. Who knew!

I do what I do because I hope in a small way I inspire you to live your own version of your best life. Your life of adventure in whatever shape or form it takes. Life on your terms is an extraordinary life. It can be shaped and it is possible. It often takes a certain level of risk to arrive, but damn is it worth it. Shoot for the stars my friends!

Elia Saikaly is an award-winning filmmaker, adventurer, and high altitude mountaineer. His global adventures inspire others to find their most meaningful lives and spark positive change. You can find more of his work on his website, Instagram, and Facebook page. Also, make sure to read his blog and sign up for his mailing list. This article was also published here and shared with permission.