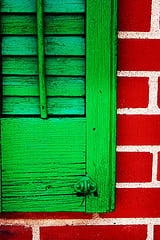 In the previous article, I talked about exposure, and how it affects the final image. I mentioned that there are three controls the one can use to change the outcome of the clicking the shutter button: ISO, Aperture and Shutter speed. This article will focus on Shutter Speed. As I said, Shutter Speed is one of the three exposure controls. Luckily for this article, it is the easiest to understand. It simply controls the amount of time the shutter is left open for light to come in and hit the sensor.

I am saying sensor, but the old experienced folks may remember a time when the light was actually hitting film. Both the sensor and film collect light. The longer the shutter is open, they see more light – so the longer the shutter is left open the brighter your image will be. But shutter speed also affects other aspect of your image. Let’s try and have a look, but first let’s set the groundwork so we better understand each other. (Shutter image by brighterworlds)

When one is describing the technical setting of a picture, they note the shutter speed in seconds – they’ll write 3 or 1/100 or 1/60. Inside the camera view finder you’ll sometimes find a shorter form of display where the “1/” is assumed and only 100 or 60 will display. In that case, when you are setting the camera for one second or more you’ll see two small lines next to the shutter speed setting: 2“. To sum it up, 1/100 is like 100 and is faster the 1/30 (or 30); both are faster than 30″.

Most cameras that offer minimal manual control will let you set the shutter speed in steps that double – i.e. 1/1000, 1/500, 1/250, 1/125 and so on. Each step will open the shutter for double the time from the previous step. (To compensate for the extra light, you will have to close the aperture one stop down, but I’ll talk about that later).

The natural question that pops to mind is “What shutter speed do I need to use?” The answer to this is both simple and complex, and mostly depends on what you are shooting. The following few points will help you to determine the right shutter speed for your picture:

Am I shooting a still or moving object? If you want to freeze your object and have it look sharp, you will need to assess its speed. The faster your object moves, the faster you need to set your shutter speed. If your object is moving toward/away from you, its speed has less effect then if it is moving from side to side. 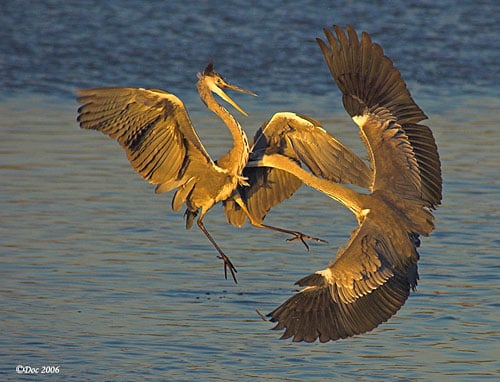 Do I want my picture to look dynamic or static? Including both blurred objects and still objects is a good recipe for making a dynamic looking image. The following image has the biker still, while the road looks blurry and contributes to the fill of speed. 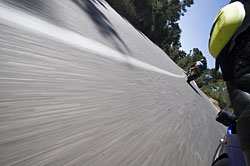 Here are some more interesting / creative uses for different settings of shutter speeds:

Shooting Stars – Shooting nightscapes is one of the more interesting ways to utilize the shutter speed control. By setting your shutter at a really low shutter speed (tens of minutes), you can see how the earth movement reflects in the starts positions. If you include both static objects (house, tree) and the sky, you will a wonderful star “line” contrasted by your static object. 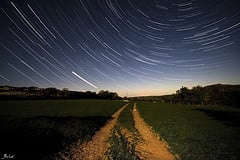 Shooting Waterfalls – When shooting a waterfall, set your shutter speed to a slow setting to get that silky look. 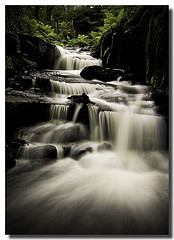 Shooting water – when shooting water in high speed, you can make the water look frozen. It will take a shutter speed of 1/500 or faster to make this magic Happen. Another option to freeze water, is to use high speed flash photography. 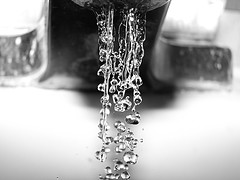 Flash Rear Sync – this is when you set your flash to pop at the end of the exposure (Also known as flash second curtain sync). The burst of light coming from the flash will freeze the action, while the long exposure will give nice blurry trails. 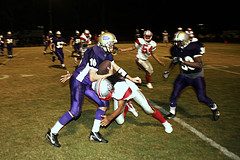 Panning: Panning is a photography technique where your camera follows a moving object at a relatively low shutter speed (1/30 to 1/60 are the usual panning values). The effect that you get is a sharp object against a blurred background. 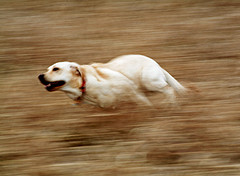 One of the key factors to understanding photography in general and shutter speed in particular is practice, trial and error, so go out and take some shots. Try something different every time. Try long exposures, short exposures, moving objects, night photography. Then go back home and analyze your pictures. Is a picture blurry? Is it sharp? Does it show motion? Action? The more you will ask yourself those questions, the better grasp you will have over the shutter speed control.

To make this happen – here is a little photography assignment. Since shutter speed effects movement perception most of all, your simple assignment is to shoot something that is in constant movement – cars.

Stand on a sidewalk and take pictures of cars in varying shutter speed settings. Start with a fast shutter speed and slowly go down. Keep your zoom unchanged. Do this on a shady day so you can explore both fast and slow shutter speeds. When you analyze the pictures look for motion blur on the passing cars. See when other object become blurred due to your camera shake.

Back To Basics – Exposure Demostrated

« Back to Basics – Exposure
DIY – The Plaster Spatula Lighting Stand »