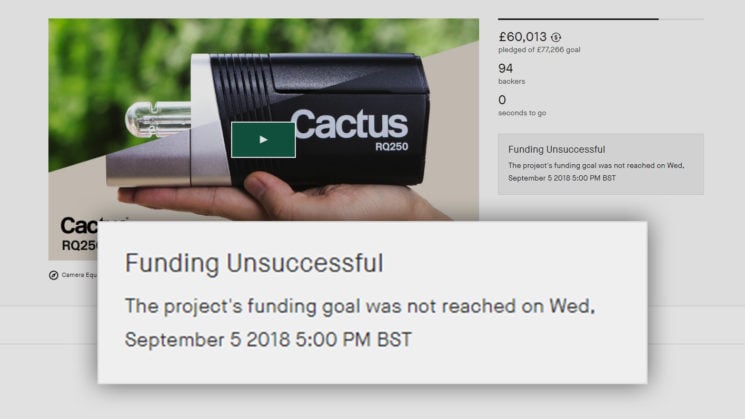 Cactus has today announced that the Cactus RQ250 portable strobe has been suspended. The reason, it seems, is down to the fact that the Kickstarter campaign was not fully funded. There just weren’t enough people interested. So, Cactus posted an update to the campaign, as well as to their Facebook page.

The RQ250 was first announced in February this year. We even got to get our hands on a prototype and have a brief play at The Photography Show in March. But when the expected release date came and went, Cactus took to Kickstarter. And now that campaign has failed, causing the suspension of the product.

I would imagine that Cactus didn’t exactly need the money, but they do need customers. The Kickstarter campaign seemed to exist primarily to get an idea of interest in the product, rather than to actually bring in funding. But falling almost 25% short of their goal, that’s a significant shortfall on their hopes. 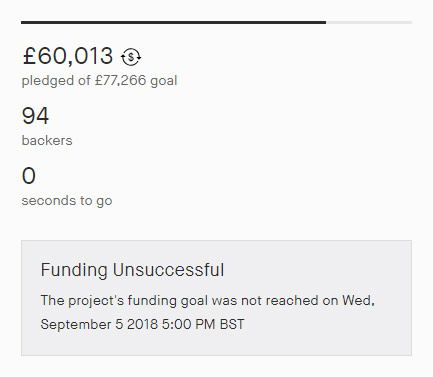 I would imagine that Godox deciding to support Pentax, the one big advantage Cactus formerly had over the competition, didn’t help much, either. While The Godox XPro-P trigger hasn’t quite been released yet, Godox has started dropping firmware updates to add Pentax X flash support to their existing system. So, it probably won’t be long now.

The only advantage now, as far as compatibility goes, is Sigma cameras. Cactus already supports these, and Godox does not. However, while Sigma’s Art series lenses are immensely popular, their Foveon sensor based cameras… not so much. I doubt there are enough flash-using Sigma shooters out there to justify the release of a product like the RQ250.

It’s a shame. I was hoping another company might rise up to compete with Godox. Not because I want Godox to fail, obviously. I use Godox kit. But because competition is a wonderful thing. And even though Godox has been innovating quite a bit over the last couple of years, we’ve all seen what can happen when an innovative company gets complacent.

But, alas, it was not to be. Or at least, not yet. The RQ250 has only been suspended, not cancelled. So there is a chance that it may still be released in the future. Of course, if Cactus does plan to eventually still release the RQ250, the more difficult it will become to do so the longer they leave it. Because while the RQ250 sits there waiting to go out, the other companies will still (hopefully) be pushing forward with even newer tech.

Cactus says on the Kickstarter campaign that as the camaign was not successfully funded, backers will not be charged.

Since the project did not complete, the amount you pledged will be cancelled automatically and your credit card will not be charged.

I was looking forward to taking one of these for a spin. I wouldn’t have bought into the system, of course. Why? Well, for the same reason that the Kickstarter campaign for the Cactus RQ250 wasn’t successfully funded. It was just too expensive for what it was.

It’s possible that it was worth every penny. However, on paper, it was a little bit better than the Godox AD200, not as good as the AD400 Pro, yet just as expensive.

But I still would’ve liked to compare them side-by-side. Maybe one day.

« These are the most annoying ways to ask photographers to work for free
Rod Stewart sued for £10,000 over copyright infringement after using a photo for a gig backdrop »