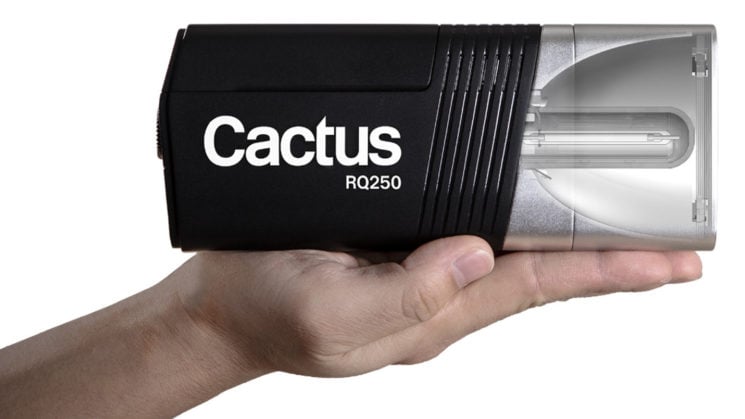 Well, it looks like the portable flash game just got a little more interesting. After a year’s worth of apparent Godox AD200 dominance, Cactus has now announced a seemingly viable competitor. The Cactus RQ250 is a 250Ws portable bare bulb strobe offering TTL, high speed sync and it fits in the palm of your hand. It also has a built-in receiver compatible with the Cactus V6II and V6IIs trigger systems.

As one would expect from a modern portable strobe, it’s powered by a Lithium-Ion battery. It features a completely custom designed flash tube, along with a “straight” form factor reflector similar to that of the new Godox AD600 Pro. But this is much smaller and lighter, and features a frosted glass front to help provide more even distribution. Cactus says it will offer 400 full power flashes on a single charge. It also comes with an on-axis LED modelling light that also functions as an AF-assist.

Cactus’ RF60x speedlight has become quite popular over the last couple of years. It offers cross-platform compatibility with a wide range of systems, as mentioned above. But the big thing that’s put many off making the switch to Cactus is the lack of more powerful compatible lights. Sure, you can stick a Cactus receiver on your regular strobe, but you’re not typically going to get that remote control or HSS that you do with some other systems.

Some users are able to stack triggers for other systems on top of their Cactus V6II, but it’s kind of a clunky solution. And exactly which features of other flash systems you’ll be able to utilise when stacked on top of a Cactus trigger is often a case of just hook it up and see what happens. Particularly in the case of Pentax and Sigma camera shooters, for which this is one of only a tiny handful of options.

It appears that Cactus have listened to those concerns, though, and are starting to provide a solution. Hopefully, this is just the first in a line of strobes, and we’ll see more powerful and capable heads coming in the future. But for now, I think this will satisfy many Cactus flash users needs.

The Cactus RQ250 is scheduled to be available sometime in Summer 2018. A price has not yet been announced. As well as the RQ250, Cactus are also releasing a colour-gels-honeycomb-snoot Filter Kit that attaches directly to the RQ250 reflector. And for all you folks with S-Type modifiers, yes, an optional S-Type bracket is also on the way, too.

It will be interesting to see how this stacks up against the AD200 in the real world when it’s released.