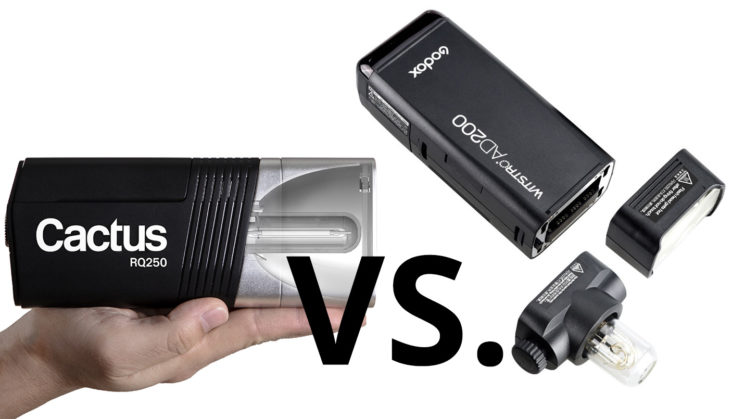 Thinking a little more about Cactus’ announcement of their new Cactus RQ250 wireless strobe, I got to wondering just how it stacks up on paper vs the current Godox AD200 unit. Obviously, it packs a little more power, but with the information that Cactus has released so far, what can we glean from it? If you’re thinking about stepping up from a basic Yongnuo speedlight system or want to start getting out on location with strobes, what’s your best option? Should you go Cactus or Godox?

Obviously, the first thing one has to consider when looking at any wireless flash system is the trigger. It’s what determines workflow, and how efficiently we can work. The Cactus V6II has been well received by Cactus flash users. It has a similar style of design to the Godox X1T, except for a couple of rather important differences. For a start the interface is generally much cleaner and easier to read than the X1T, and it’s also not just a receiver, it’s a transceiver. So you don’t have to buy separate receivers, any V6II can act as either transmitter or receiver for other flash units. The X1T dial is also a bit temperamental, not always recognising that you’ve actually moved it.

So, between the Cactus V6II and Godox X1T triggers, the choice was always quite obvious to me. The V6II wins hands down when it comes to usability. But then Godox had to go and release their new XPro trigger. This changes the game completely. I have three XPro triggers now. I have two for Nikon (got to have a backup!) and a Canon one for when I’m using one of their DSLRs, and they’re absolutely fantastic. Probably the best flash trigger I’ve ever used.

But, that’s me. Which you feel will be best for you is going to boil down to personal preference. Beyond the trigger, it’s the range of lights. For the sake of this comparison, let’s assume you don’t really need anything more powerful than the Godox AD200 or Cactus RQ250. Because, at this time, to assume that neither unit can keep up with your needs gives Godox something of an unfair advantage.

With that out of the way, let’s take a little look at the specs of the two lights. Now, do bear in mind that the Godox AD200 has been out for a year now. It’s been well tested and proven its worth in battle. The Cactus RQ250 information still isn’t quite complete just yet and Cactus tell us that a few things still need ironing out.

We don’t know what the flash duration on the RQ250 is like just yet, and the recycle time on the Cactus RQ250 is more of a goal than a final finished spec at the moment. But assuming they hit their target, that is at full power, which is a little more powerful than the AD200. So, when dialled back a third of a stop or so to match, it should come down quite nicely.

That slight difference in power output could go some way toward explaining the difference in the total number of flashes. All else being equal, 20% more power would equate to a 20% reduced total maximum power flashes. So the chances are that the battery, while not confirmed, is of similar capacity. Assuming identical output efficiency (which never happens, by the way), once you knock the RQ250 power down slightly to match that of the AD200, you should probably see about the same 500 pops.

There’s no Fresnel head with the RQ250, but I don’t know anybody who actually uses the Fresnel head with an AD200 anyway. Obviously, the Fresnel head does have its advantages over a speedlight, but most folks still seem to go the speedlight route anyway. The RQ250 does come with a reflector, though, containing a frosted lens at the front. It’s sort of similar to the design of the new AD600 Pro head & reflector, except in that instance, the frosted glass is on the front of the flash tube glass itself, and not in the reflector.

With specs out of the way, the only thing left is the actual form of the flash unit itself. The AD200 is like a chunky speedlight. It fits into the Godox S-Type bracket just as a speedlight would, and many other modifiers designed for speedlights, even if you’re using the bare bulb head. The RQ250, on the other hand appears a little more round, from the one image they’ve released so far. More of a traditional flash head design, only smaller.

For some, this design will be of more benefit, especially once Cactus release their own S-Type adapter allowing you to use the RQ250 with your existing Bowens modifiers. But for others, who may have already invested in various speedlight modifiers, this could potentially be a deal breaker.

Overall, though, the two do seem to be very close, with only slight differences. At least on paper. Performance wise they should be pretty close, although if Cactus can get the full power recycle time down under 2 seconds, then it may have the edge there for more demanding shooters.

Like many things in photography, it’ll likely ultimately boil down to personal preference vs how much you’ve already invested in other gear that may or may not be compatible with one or both units.

In some part, it’ll also come down to the brand of camera you’re shooting. I know a number of Sigma and Pentax users who absolutely love the Cactus speedlight system, and will almost certainly jump on this once it’s released to get a little more power with TTL & HSS capability.

Of course, if Godox get their act together and start adding support for Sigma & Pentax cameras to their own cross-platform system, that could make this market a little tougher for Cactus, given Godox’s current standing.

Regardless, and as much as I like my Godox kit, it’s nice to see another lower budget flash manufacturer stepping up to take them on. Competition is a wonderful thing. It drives innovation and stops companies from becoming complacent and ending up the way of Bowens.

The Cactus RQ250 is scheduled to be available sometime in Summer 2018. A price has not yet been announced. As well as the RQ250, Cactus are also releasing a colour-gels-honeycomb-snoot Filter Kit that attaches directly to the RQ250 reflector. And for all you folks with S-Type modifiers, yes, an optional S-Type bracket is also on the way, too.