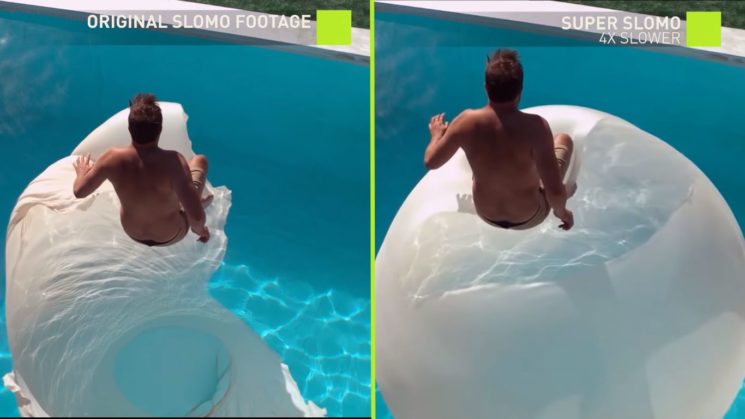 If you’ve ever tried slowing down a video shot at 30 fps, you know that it becomes choppy and unusable. Nvidia has an AI-based solution for that which can turn your standard videos into watchable slow motion. The algorithm predicts what should come between two frames and fills in the space between them. As a result, you can get perfectly usable slow motion videos even if they were shot at 30 fps.

Basically, the AI observes two different frames of the footage. It tracks the movement of objects from one frame to the next and based on this, it creates the frame to fill in space. This way, you get more frames, and thus a slow motion footage that looks smooth.

“But my smartphone already shoots slow motion at 240 fps!” I hear you say. True, there are even phones shooting at 960 fps. However, Nvidia researchers explain that shooting slow motion with smartphones can be impractical, “as it requires large memories and is power-intensive for mobile devices.”

With this new technology from Nvidia, you should be able to record a standard video and slow it down later. The AI will predict frames that will fill in the empty space. You’ll use much less of the phone’s memory, and still end up with a nice and smooth slow motion footage. There are still some improvements to be made, though, but you can expect to see this tech in your phone in the near future, The Verge writes.

Finally, here’s a video demonstration so you can see how this works. Although it still needs some improvement, it looks pretty impressive already:

[Nvidia via The Verge]

Slow motion sound in videos is fake… Well, most of it is