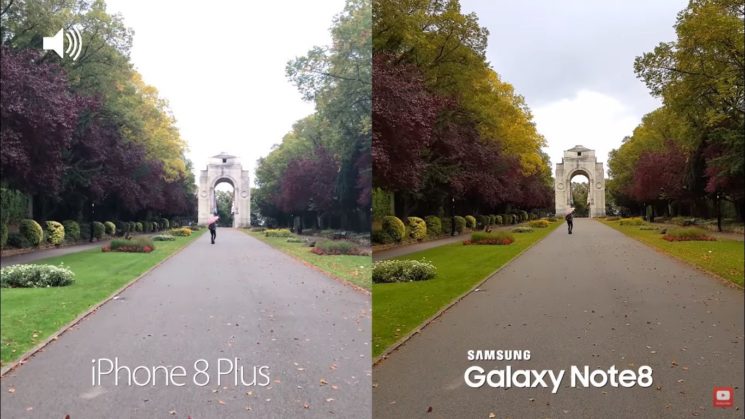 According to the DxO tests, the camera of the iPhone 8 Plus is the best they’ve tested so far. It scored the impressive result of 94, but could Samsung Galaxy Note 8beat it? DxO hasn’t tested this phone’s camera yet, but SuperSafTV’s Safwan Ahmedmia has.

In this video, you can see a side-by-side comparison of iPhone 8 Plus and Galaxy Note 8. He tests the quality of the video, audio and photos, in terms of sharpness, low-light performance, dynamic range, background blur and so on. It’s a pretty detailed test and gives you a really good insight into the performance of both cameras. And if you’re thinking of getting the latest iPhone, this comparison might make you think twice.

Safwan starts the test with video comparison between the iPhone 8 Plus and Samsung Galaxy Note 8, and switches the audio of the two phones. The image quality is noticeably better with the Galaxy Note8, as well as the image stabilization. The optical zoom also gives a sharper image than the one of the iPhone. As for the audio, Samsung beats Apple once again, at least at the beginning. As the video goes on, it seems like this changes, depending on the conditions (and probably my laptop speakers as well, to be fair).

The rear cameras of both phones have similar specs: dual camera, both main and telephoto are 12MP, and the ones on the Samsung’s phone have slightly larger aperture and wider angle. However, the front cameras differ a bit more. The one of iPhone 8 Plus has 7 MP and f/2.2 and no AF, while Galaxy Note 8’s camera has 8MP, f/1.7 and AF.

The dynamic range of the Galaxy Note 8 seems largely better than the one on iPhone 8 Plus, and HDR is more realistic. It’s interesting that with the wide-angle shots, iPhone photos have blueish tones, and they look more natural with the telephoto. 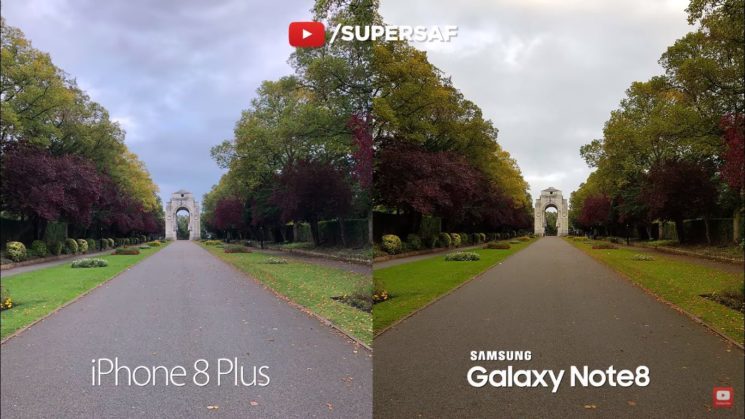 When it comes to sharpness, it seems that Samsung’s on the lead again. No doubt that iPhone produces neat-looking images, but when zoomed in, the ones taken with Samsung have a bit more detail. 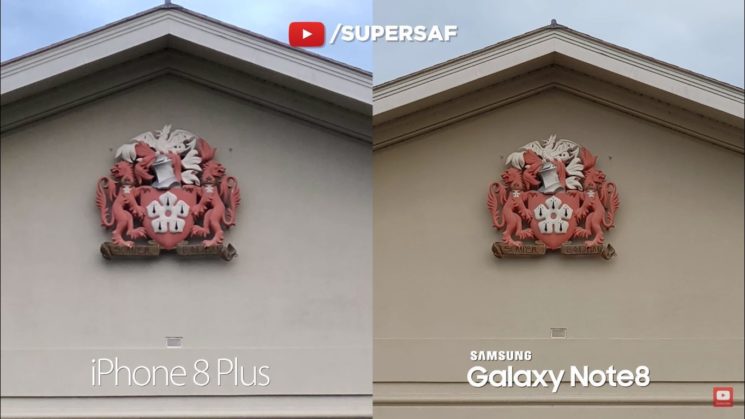 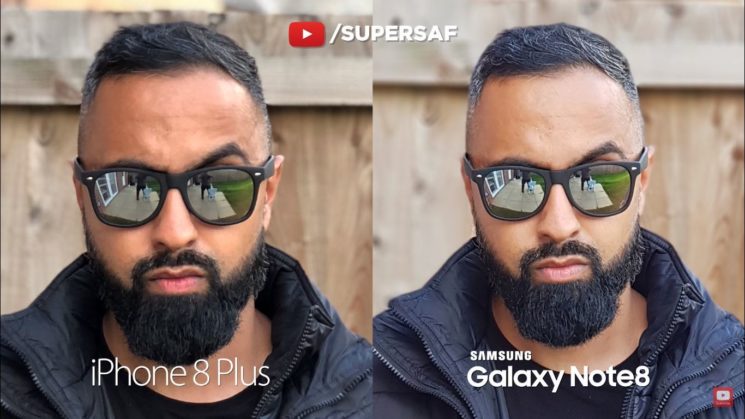 In low-light situations, both cameras do quite well. The front camera with flash gives better results on the iPhone, and the rear one is equally good on both phones. The background blur is pretty neat on both phones as well, but I like it a bit better on the Samsung. Also, it allows you to edit the background blur later. But at the same time, you can relight the subject on the iPhone 8 Plus, which Samsung Galaxy Note 8 doesn’t offer. 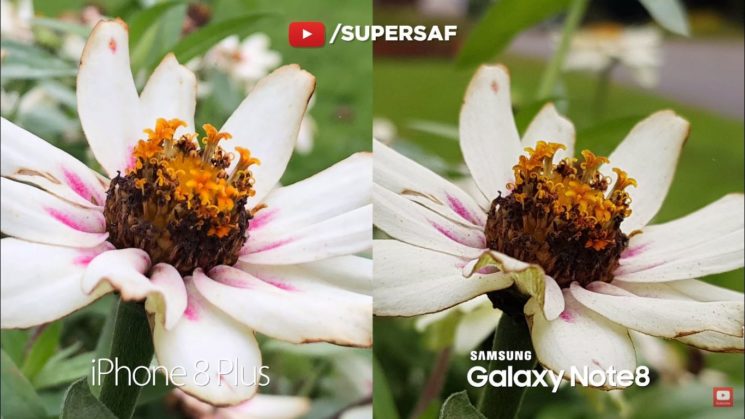 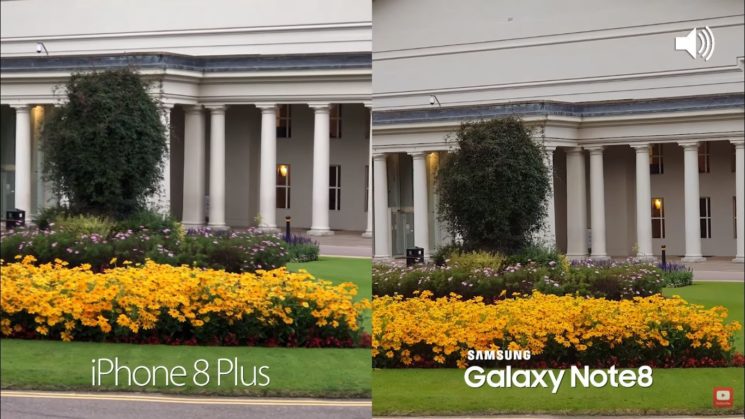 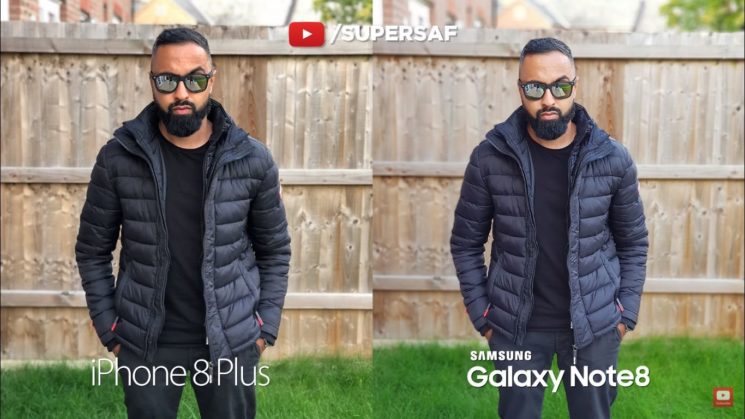 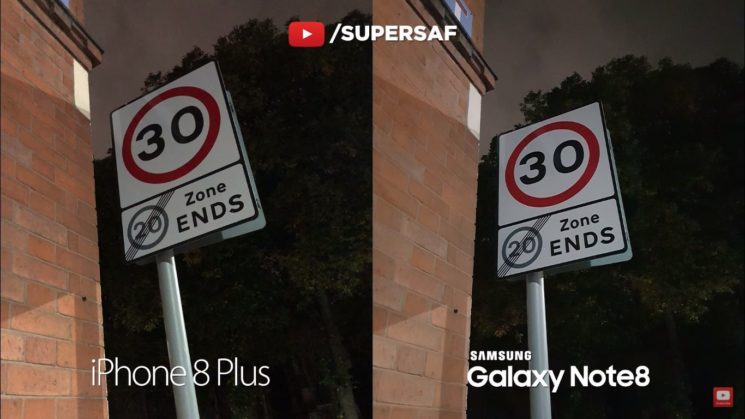 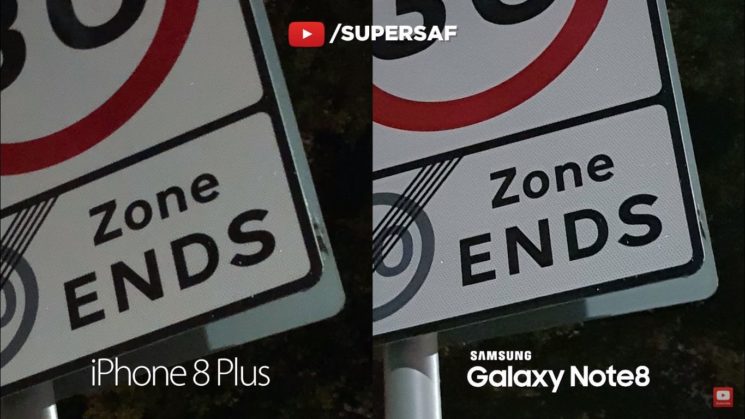 In some aspects, it’s clear and objective which camera wins the battle. In the others, it’s just a matter of preference. But, I must say my overall vote goes to Samsung Galaxy Note 8 over the iPhone 8 Plus, at least judging from this video. Which one do you prefer?