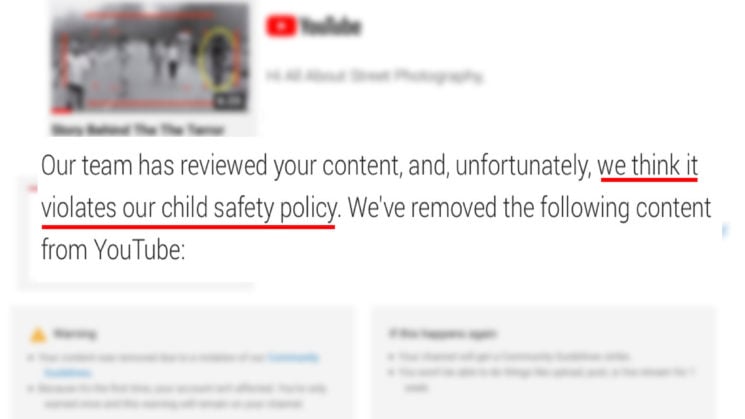 Facebook has gone under fire a few times so far for censoring “nude” images that are artistic, iconic, or merely show nude statues. And after Facebook censored the famous Nik Ut’s photo “Napalm Girl,” it looks like YouTube followed the same footsteps. Martin Kaninsky of All About Street Photography recently uploaded a video that tells the story behind this iconic photo. However, it was soon flagged for violating YouTube’s Child Safety Policy.

Shortly after uploading his video Story Behind The The Terror of War: Nick Ut’s “Napalm Girl” (1972), Martin received Community Guidelines strike from YouTube. The strike he received was for a link featured in his video and it leads to allthatsinteresting.com.

The story found on this link is relevant for the video, considering that it gives more information on Nick Ut’s image. It shows the iconic photo we all know along with two more images. One of them depicts the girl standing in a puddle of water that had been poured over her burns.

Martin was notified by YouTube that this links violates its Child Safety Policy and it was therefore removed. “What is going on? Is this how you treat important history?” Martin wonders in a tweet he shared after YouTube penalized him.

As I mentioned, Facebook also flagged the photo as inappropriate, and it was back in 2016. After a pretty loud public outcry, Facebook uncensored the image and promised to relax its restrictions on newsworthy images. Still, it had some bizarre decisions, such as censoring a Rubens painting or a 30,000-year-old statue of a naked woman, but that’s another story.

As for YouTube, it’s hard to say what’s wrong and what’s right here. On the one hand, I believe that social media should relax their policy on iconic, newsworthy and historically important images. This includes “Napalm Girl,” along with some other photos taken during the same event.  But on the other hand, many of these photos are flagged automatically because AI recognizes them as inappropriate. Also, it can be difficult even for a human to distinguish what is iconic, newsworthy and historically important, since these criteria can’t escape a subjective judgment. So, I’m not really sure how I’d handle this.

What do you think, was YouTube right to flag this video?