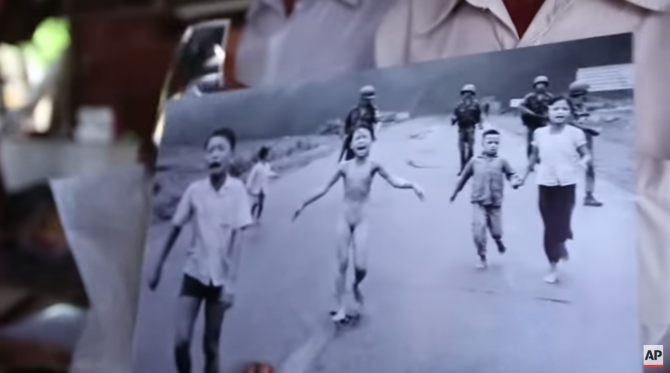 War is tragic, and no one who has not lived through it can begin to understand its horrors. Yet, perhaps that is one of the reasons I was so captivated by it as a child. I have always loved history, but I have always been specifically intrigued by military conflict. As a kid, the only books I read were history books. I would wore out the children’s history section in our local public library and proceeded to move on to the adult section. I would come home with a thick stack of history books, particularly those involving the World Wars and Vietnam, and there were occasions when my dad would start flipping through them and ban me from certain ones until I had reached a more mature age. I would pull them off the shelves and read them in the library anyhow.

Of all the images I saw and the stories I read, one of them that stuck with me is the image of Phan Thị Kim Phúc running naked and screaming down a Vietnamese road. It is the Pulitzer Prize-winning image the rest of the world had come to know as “Napalm Girl.”

The image was taken by AP photographer Nick Ut who was photographing a fleeing group of refugees and soldiers to South Vietnamese-held territory when a South Vietnamese Air Force pilot mistook their identity and dropped a napalm bomb on them. Feeling the heat from her flaming clothes, the girl took them off and continued running down the road suffering severe burns that required a 14-month hospital stay and 17 surgical procedures.

On June 8th, exactly 43 years after taking the photograph that some US political figures, including President Nixon himself, questioned as legitimate, Nick Ut returned to the site of that horrific scene, this time documenting his trip with Instragram.

This is Ho Van Bon, 54. He is Kim Phuc’s cousin, and he is running in the photo next to Kim on the far right. His left arm and part of his body were burned by napalm.

Anguyen Thi Dam, 58, is Kim Phuc’s sister-in-law. She married Kim Phuc’s brother, Phan Thanh Tam, who was in the picture on the left. He lost one eye due to napalm, and he ran this noodle shop after the war. Her family lived in this shop.

They say that time heals all wounds, and while I would love for that to be true, I can’t help but feel that perhaps there are some that even time can’t soothe.

[via PetaPixel | Images via AP Instagram and video screen grab]