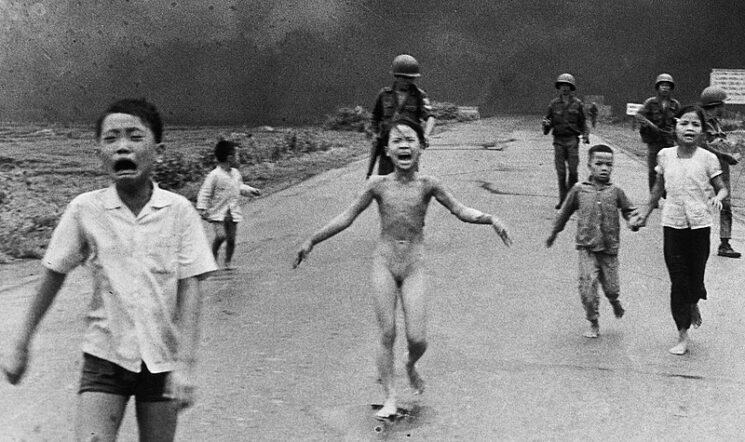 Only flashes of memory remain of that fateful day. Kim Phuc Phan Thi, aged just nine years old, was outside playing with her siblings and cousins. In an instant, the course of her life was altered. She remembers a plane swooping down, a loud noise, explosions, smoke, and then followed excruciating pain.

After that Kim remembers little. South Korean photojournalist Nick Ut took the iconic photograph for the Associated Press that has become famous worldwide for depicting the horrors of war. From that moment, Kim became known as ‘Napalm Girl’. Fifty years on from when Ut pressed the shutter, Kim has spoken out about the effects of that photograph on her life and how impactful a single image can still be.

The image almost didn’t reach the rest of the world. Initially, the photograph was rejected by the Associated Press because of the girl’s nudity. A few hours later, this decision was overruled by Horst Faas, Associated Press’s chief photo editor in Vietnam, and the photograph was reproduced by newspapers across the world. The image went on to win Ut a Pulitzer Prize.

Kim doesn’t remember ripping off her clothes to escape the napalm, nor does she remember running down the road screaming. But she does remember Nick putting down his camera and helping the children. “After he took the photo, he put his camera down, wrapped me in a blanket and whisked me off to get medical attention. I am forever thankful,” says Kim.

Even 50 years on the power of that single image is undeniable. So much so, that YouTube and Facebook even tried to censor it due to its own nudity rules. The Vietnam war was the first war where footage appeared on public television, however, you could argue that the still image is far more powerful.

Kim herself agrees that the power an image can have in changing the course of politics is considerable. She has a unique perspective, admitting that for years she suffered under the weight of the famous photograph. She told the New York Times that she hated Nick at times and that growing up she detested that photo. She felt stigmatised due to being the only naked child depicted, and she suffered ongoing pain from her scars which covered a third of her body.

As the photograph became more famous, Kim was unable to avoid it. She became a symbol of hope and found herself being called upon as an advocate for other victims of war, particularly innocent women and children.

“Photographs, by definition, capture a moment in time,” says Kim, “but the surviving people in these photographs, especially the children, must somehow go on. We are not symbols. We are human. We must find work, people to love, communities to embrace, places to learn and to be nurtured.”

After defecting to Canada, Kim was finally able to make peace with the photo. She established a foundation and began travelling to war-torn countries to provide medical and psychological assistance to children victimized by war, offering, she hopes, a sense of possibilities.

Kim says that we must not turn away from images depicting the atrocities of war such as those taken by photojournalists in Ukraine. Similarly, the devastating school shootings in the USA. “We may not see the bodies, as we do with foreign wars, but these attacks are the domestic equivalent of war,” she says. “The thought of sharing the images of the carnage, especially of children, may seem unbearable — but we should confront them. It is easier to hide from the realities of war if we don’t see the consequences.”

“I think that showing the world what the aftermath of a gun rampage truly looks like can deliver the awful reality,” says Kim. “We must face this violence head-on, and the first step is to look at it.”

While most of us would probably prefer to get on with our lives without having to confront such awful images, Kim does have a very strong argument. Times have changed considerably since ‘Napalm Girl’ was taken, and you could very much believe that TikTok posts and video footage taken by ordinary people caught up in war have overtaken the impact of the official press. But one thing is certain for sure; images and footage still have considerable power to provoke change.

“I’m proud that in time, I have become a symbol of peace,” says Kim. “It took me a long time to embrace that as a person. I can say, 50 years later, that I’m glad Nick captured that moment, even with all the difficulties that image created for me”