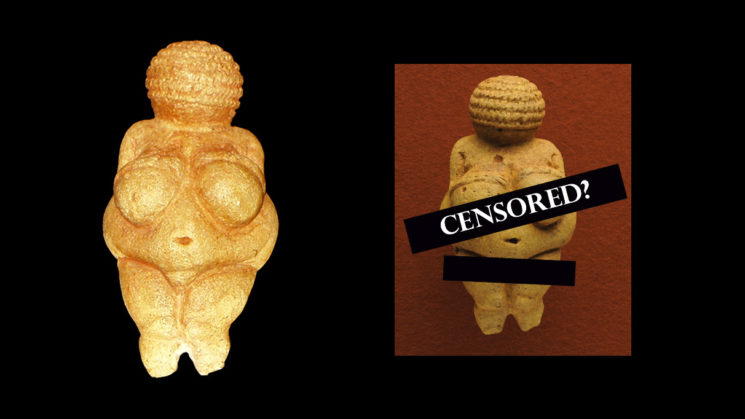 As if Facebook’s photo rules and regulations didn’t seem stupid enough already. Now, according to Business Insider, they’re banning people for posting photographs of 30,000-year-old statues that have appeared in history books for decades. The Venus of Willendorf is an 11.1cm (4.4″) all figurine estimated to have been made sometime between 28,000 and 25,000 BCE.

It currently resides in the Natural History Museum in Vienna. In December a photograph was posted by Italian arts activist, Laura Ghianda to Facebook. It was censored and Ghianda was banned from posting the photograph again. BI reports that Facebook says the image violated the company’s policies on nudity.

Undeterred, Ghianda kept reposting the image to her Facebook, only to have to appeal it 4 times.

The Vienna Natural History Museum also responded when they found out through a Facebook post of their own.

#Censorship of Venus their nakedness! For 29.500 years, “our” Venus of willendorf has been presented as a prehistoric fertility undressed in full glory Facebook is now censoring (https://tinyurl.com/ycf9gtvn) and has been surging for days. We do not want to accept this and argue that Venus must remain naked!
Give us a like if you see it as well.

There is no reason for the Natural History Museum Vienna to cover the ‘Venus of Willendorf’ (a 29,500-year-old figurine, a naked representation of a woman of the Paleolithic Age) and hide her nudity, neither in the museum nor on social media.

There has never been a complaint by visitors concerning the nakedness of the figurine and we have never heard of anybody who could have been offended by the look of this artefact.

Despite Ghianda having to dispute Facebook’s claims four times, Facebook says it was all just a misunderstanding. Four times. Four misunderstandings. A spokesperson for Facebook told BI that Ghianda had tried to run an ad containing the photo of the venus which was mistakenly banned before realising it was a statue.

Our advertising policies do not allow nudity or implied nudity but we have an exception for statues. Therefore, the ad with this image should have been approved.

We apologise for the error and have let the advertiser know we are approving their ad.

Gotta be honest, if this looks like a real person to anybody working at Facebook, they really need to have their eyes checked. And it’s not the first time Facebook has banned people for their art, either. Last year, Canadian photographer Julia Busato was banned for her images containing people hiding behind a naked mannequin.

They’ve also banned images and users for posting some of the most iconic photography the world has known, such as the famous “Napalm Girl“. A decision on which they later backed down, just like this one.

Either way, this particular example is clearly covered. So, either not all of Facebook’s enforcement staff have read this, or they’ve no idea what it actually means. But Facebook’s rules on this matter are so vague it’s impossible to see where the goal posts even are, let alone have any clue on whether or not Facebook’s randomly moving them about.

One of these days, Facebook’s rules will get a little clearer. But I doubt it.

Photographer banned from Facebook because of naked mannequin photos [NSFW]