Canadian photographer Julia Busato had her profile banned from Facebook because of a photography project she’s been running.  Some Facebook users criticized her photos of naked women posing behind a mannequin, and reported her. As a result, Facebook banned her and she’s unable to access her personal profile and page.

Julia started the project over a year ago. It features women posing naked behind the mannequin, sharing the message that we are all different and we don’t fit the same mold that society has imposed on us. Julia herself says that she “doesn’t fit into modern society’s version” of what a woman should act like or look like. And as a woman who is very far from the universal beauty standards, I can relate.

Over the past year, the photos from this project have been shared more than 200,000 times. Women are still asking to join, and some men posed to support the project, too. All of the models are posing nude behind the female-shaped mannequin, showing that they differ, expressing their story and individuality. But it seems that prudes are unable to see this, it’s only some skin that pokes their eyes so badly.

The project is not only about having different body shape from what’s considered beautiful. Women (and men) of all sorts took part. They didn’t only share the image of their body, but often their story too – and Julia captured each of them in a single photo. It’s not about being “thin”, “curvy”, “fat” or whatever. It’s about being yourself, beautiful for whoever you are, whatever you look like and whatever your story is.

According to the photographer, people reporting her on Facebook impacts her way more than they may expect. It takes away from her business a lot, and I agree with her: 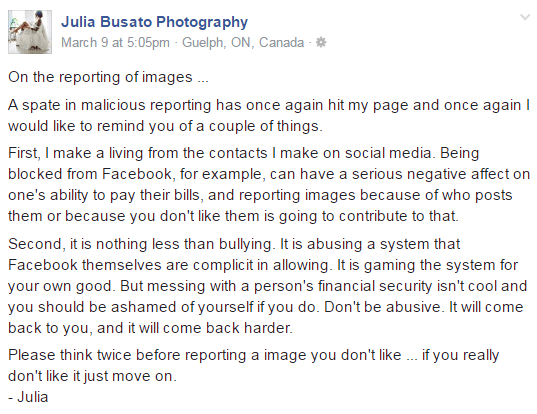 Julia says that the recent incident won’t drive her away from the project. She’s still looking for people who want to share their stories and participate. She says that this series “lets people know that they aren’t alone and it’s OK to be different than the norm.” She recognizes that “women are standing up for each other and supporting each other” through the project. And the fact that the series is being shared all over the world brings her a lot of joy.

Honestly, I think the “Report” option is useful, but I’ve never seen Facebook use it properly. Whenever I reported hate speech or threatening, the social network never took action. But when people get disgusted over some skin and plastic mannequin boobs, Facebook bans artists from their profiles. I’m very sensitive to censorship, and I believe it’s harmful and dangerous for a society.

When it comes to art, I think the limits shouldn’t exist, as long as we don’t endanger anyone. Julia’s project is not only harmless, but it’s strong and empowering to all the women out there who don’t want the “standards” to define them. And just like with any other art – if you don’t like it, move on. Explore other works, and don’t be mean to artists just because you don’t understand what their message is. And one last thing – please, don’t feel offended or disgusted by the image of the human body.