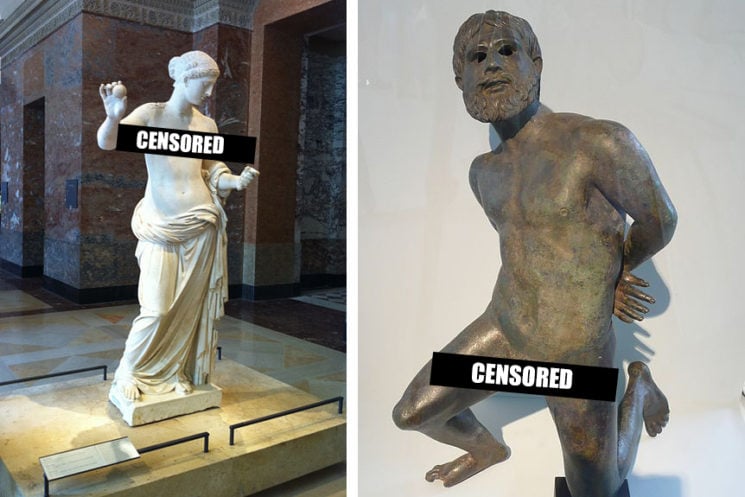 The museum tried to promote its upcoming show titled César et le Rhône (Caesar and the Rhone). In the Facebook advertisement, there were images of the two sculptures. One is the Vénus d’Arles, a marble statue of a semi-nude Venus made in the first century CE. The other is “Statue de captive” a bronze from the first century BCE that depicts a nude man. After posting the ad, the museum reportedly received the following message from Facebook: “We don’t allow ads that depict nudity, even if it isn’t sexual in nature. This includes the use of nudity for artistic or educational purposes.”

We wanted to promote the exhibition “César et le Rhône” using these two works but #Facebook we forbid it, because of their nudity… Perhaps it would be time for this platform to change its policy for museums and cultural institutions?

As you may remember, Facebook has had similar censorship fails before. There was that time when they banned a user for posting a photo of a 30,000-year-old statue. Some iconic works by Irving Penn and Peter Paul Rubens also didn’t make it through the nudity filter. Photographer Julia Busato got banned from Facebook after posting a series of really powerful photos of nude models hiding behind a mannequin. But then again, there have been rare cases when Facebook has reversed a censorship decision, such as that time when the famous photo Napalm Girl was censored, and then uncensored.

Just like the person behind Geneva’s Museum tweet points out, it’s probably time for Facebook to change its policy for museums and cultural institutions. As a matter of fact, Facebook’s Community Guidelines read that they “allow photographs of paintings, sculptures and other art that depicts nude figures.” Therefore, I am really curious how these images were banned in the first place, considering that they don’t actually violate Facebook’s nudity policy. Either way, this isn’t the first time that something like this happens, and I’m sure it’s also not the last.