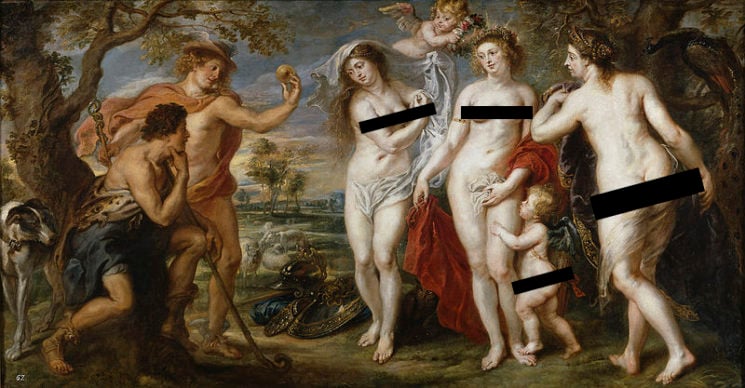 It’s nothing new that Facebook censors nude photos, but now it turns out that even classical works of art aren’t spared from the social network’s policy. Works of 16th-century painter Peter Paul Rubens have been removed from Facebook after the Belgian region of Flanders shared them in a social media advertising campaign. As a response, Toerisme Vlaanderen, the Flemish tourism bureau wrote a rather humorous open letter to Mark Zuckerberg. They have even published a comical video that mocks the “21st century social media regulations.”

The Facebook campaign in question is a part of a project for that showcases works by Flemish artists. However, all the images were removed from the platform because they were, apparently, violating the nudity regulations. In the open letter, Toerisme Vlaanderen retains a good sense of humor, but still points out to the problem:

“Breasts, buttocks and Peter Paul Rubens’ Cherubs are all considered indecent. Not by us, but by you. Even though we secretly have to laugh about it, your cultural censorship is making life rather difficult for us.”

According to Brussels Times, The Flemish Office has drawn up a plan for 2018-2020. The goal is to promote the works of Flemish painters from the 15th, 16th and 17th centuries, such as Rubens, Bruegel, Van Eyck and others. However, Toerisme Vlaanderen CEO Peter De Wilde says that Facebook is making it impossible to promote Flemish unique cultural heritage.

This is not the first time Facebook has censored photos of a work of art. But its policy reads that “photographs of paintings, sculptures, and other art that depicts nude figures” are allowed on the platform. Still, despite the policy, the open letter and the video, it looks like the images of Rubens paintings have still not been brought back to the platform. I guess painted cherubs’ buttocks and female boobs are just too hardcore for Facebook.