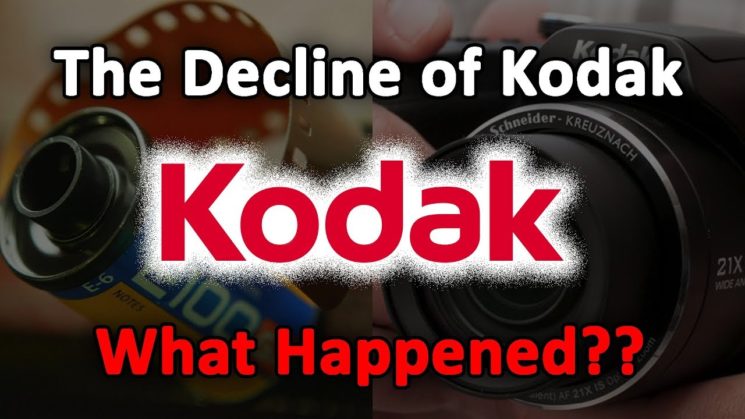 For 100 years, the name Kodak was a synonym for photography. But in recent years they went from being the industry leader to filing for bankruptcy. In this video, Company Man explored the decline of the company and tries to answer the question: what happened to Kodak?

The Eastman Kodak Company, or simply Kodak, was founded by George Eastman and Henry Strong in 1888. The full name of the company comes in part from George Eastman’s last name. And as for the word Kodak, it was chosen just because, well, it sounded good and it was easy to pronounce, as the video explains.

During the most part of the 20th century, Kodak was the absolute leader in the photography industry. They made photography easier and available to the general public, which certainly makes a part of their success. They made film processing easier and more affordable thanks to the legendary Kodachrome. They introduced the concept of snapshot to the public, encouraging people to capture their precious moments in time without worrying about getting the perfect shots. As a result, people related the tagline “Kodak moment” with meaningful, photo-worthy moments of their lives.

In 1976, Kodak had 85% market share in cameras and 90% market share in film. And they were doing so well for such a long time. In 2005, their net income started to decline significantly. So, what happened? Was your first thought “digital cameras?” Sure, this was the time when digital cameras started to really in popularity. But it’s more complicated than that. See, in 1975, an electrical engineer at Kodak Steven Sasson invented the digital camera. Three years later, Kodak received a patent for it.

During the nineties, while digital cameras were on the rise, Kodak didn’t ignore them. The company was selling digital cameras during this time and was even the leader in this field. But, the decline still occurred in 2005. The conclusion coming from Company Man is that this happened because Kodak didn’t focus on digital cameras… enough.

Kodak didn’t ignore digital cameras, but they didn’t give them a full attention either. The company underestimated just how big the digital would get, and it was apparently a big mistake.

Why did this happen?

Company Man describes Kodak’s wrong prediction as nothing but “blind optimism.” But still, it’s strange for the biggest photography company not to predict the future of the industry. The video explains that this probably happened because Kodak knew about film, perfected many processes, and even invented some of them. Film was how they made money, and they hardly made any of it by selling cameras.

With digital cameras, there was no film and no prints. So the camera, one thing which used to make Kodak very little money, became the only thing people wanted.

Finally, with other brands producing digital cameras, Kodak wasn’t the industry leader any longer. They were competing, just like everyone else. And they didn’t do well, which finally led them to filing for bankruptcy in 2012.

Kodak came out of the bankruptcy and still exists today, but now they deal with other technologies (even blockchain). Their revenues are much smaller and they still struggle. But as Company Man says, maybe we can just watch them as a giant who revolutionized the photography industry and led it for 10 years. “They did some great things for photography and maybe it was just their time to go. What they did best was no longer needed. In today’s world, it would be impossible for them to exist in the same way.” But still, Kodak should be remembered for “their century of success, not their decade of struggle.”

[The Decline of Kodak…What Happened? via FStoppers]

The story of Polaroid: From empire to bankruptcy and back again

Without Prior Notice, Calumet Just Closed Down Every One of its Stores in the US, and Filed for Bankruptcy

Oprema Jena’s future in doubt as company files for bankruptcy

« Do these 10 things before you go out and shoot with your new camera
Neewer releases 35mm f/1.2 APS lens for Fuji and Sony that costs only $120 »