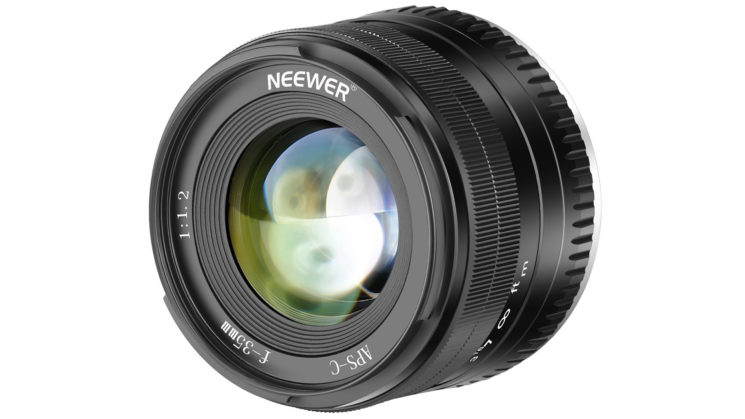 It looks like Yongnuo aren’t the only cheap Chinese manufacturer looking to expand into lenses. Although, while Yongnuo does typically make the products onto which their names is emblazoned, Neewer generally doesn’t. They simply buy and brand. Which makes this Neewer 35mm f/1.2 APS-C lens for Fuji X and Sony E mount (coming soon) particularly interesting.

Regardless of whether Neewer make it themselves, or they’re simply branding somebody else’s lens (and I haven’t seen this appearance for sale under any other names), this thing costs only $119.99. I imagine the performance wouldn’t be quite as good as Samyang’s $379 35mm f/1.2 offering. But looking at the specs, it does resemble another low budget 35mm f/1.2, even if the look is slightly different. And that’s the one from 7artisans.

Like the $145 7artisans 35mm f/1.2, it features 6 elements in 5 groups, 9 rounded aperture blades and stops down to f/16. While the dimensions of the 7artisans lens aren’t listed on the B&H website, the proportions do look quite similar to the Neewer. The weight is also identical at 150g, as is the 43mm filter thread diameter.

If it is copied from 7artisans, which I suspect that it is, then it might explain why PhotoRumours believes that a Sony version is on the way. 7artisans also make a Sony E mount version of their 35mm f/1.2 lens, so it’s a natural assumption to make.

Despite the Fuji X mount version being listed on Amazon, it’s up there as a new release with no purchase option yet. There’s no word on when orders (or pre-orders) will open up or when they’ll actually start to ship. A Sony version has not yet appeared on Amazon.