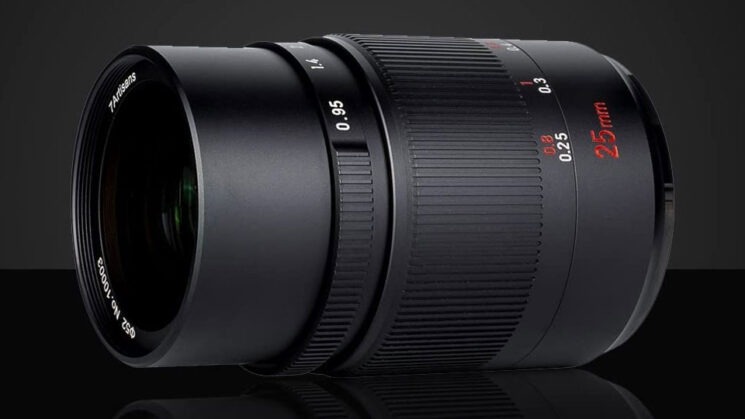 7Artisans has released their new 25mm f/0.95 manual focus lens for APS-C mirrorless and Micro Four Thirds. The lens was first teased in September, but now it’s finally official, available and all of the specs are published. The lens is designed specifically for mirrorless cameras, being available on Sony E, Fuji X and Nikon Z APS-C mount options, as well as MFT.

That nice wide f/0.95 maximum aperture will let in a lot of light and allow for some pretty shallow depth of field, despite being made for APS-C and MFT cameras. On APS-C it offers a field of view equivalent to about 37.5mm on full-frame and on Micro Four Thirds it’s about a 50mm full-frame equivalent field of view.

As seems to be the case a lot with the new wave of inexpensive manual focus lenses over the last couple of years, the 7Artisans 25mm f/0.95 features all-metal construction, with 11 elements in 9 groups (including three Hoya ultra-low dispersion elements for increased contrast and CA suppression) and a 13-blade aperture for nice round bokeh balls.

That wide f/0.95 aperture opens up a lot of options for super shallow depth of field on a relatively wide angle with APS-C sensors and would provide results similar to a 50mm f/1.8 lens on a full-frame body when used on a Micro Four Thirds camera, except that wide aperture gives you an extra stop of light over that full-frame setup.

7Artisans says that multi-layer coatings help to reduce flare and ghosting while increasing contrast and colour accuracy. A lens hood is also included to further minimise the risks of flaring. Sounds like a great lens for some street photography!

The 7Artisans 25mm f/0.95 is available to buy now for $369, is available in Sony E, Nikon Z, Fuji X and Micro Four Thirds mount and is expected to start shipping in early November.

Yongnuo announces 25mm f/1.7 lens for MFT and it appears to be an original design