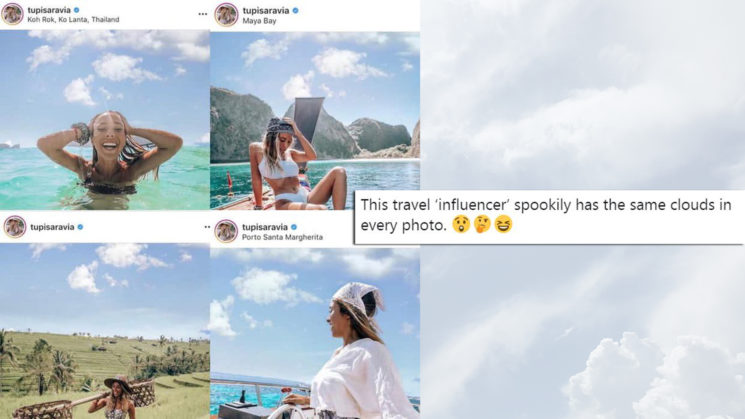 Famous travel bloggers and Instagram influencers have hundreds of thousands, even millions of followers. But Argentinian travel blogger Tupi Saravia seems to even have the same clouds following her on her travels. She was recently called out for posting photos from different locations – but most of them having the exact same clouds.

This travel ‘influencer’ spookily has the same clouds in every photo. ??? pic.twitter.com/uYzXhTiRJp

And indeed, she does seem to have the same clouds follow her, along with 311K Instagram users:

Navarra’s tweet got retweeted over 12K times, and it caused plenty of reactions. Some people were defending Saravia, saying that sky replacement is a common practice among brands and Influencers. Others called her out for it, as well as for making her Instagram profile private after the whole thing went viral. And as usual, there are also people who made great jokes about it:

”Everywhere you go, you always take the weather with you.”https://t.co/SX4882BV2c

According to some Twitter users and several media outlets, Saravia made her Instagram private after the whole thing became viral on Twitter. However, her profile is public again. She even states that she edits her photos and that she’s always been opened about it with her followers:

“It[’]s an app called QUICKSHOT that i’ve always been opened about with my followers, actually there is a highlighted story on my feed where you can see how I edit my followers pics changing the sky. No big deal, I use it for better composition in my pictures when the actual pic has a burt or overexposed sky♥️ can’t believe how far my clouds went, if you need some I can do a giveaway”

To be honest, I’m not surprised at all that an influencer is editing and faking her images. After all, sky replacement has never been easier. Although, perhaps she could vary those sky photos a bit, and not use just one. Still, as long as she doesn’t photoshop herself into different locations, it’s all good. Although even that wouldn’t be surprising at all.