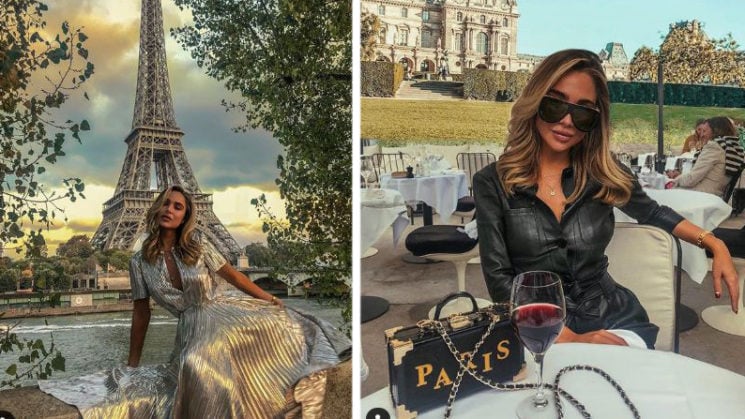 Swedish-born Instagram star Johanna Emma Olsson recently posted photos from her glamorous trip to Paris, posing in front of some iconic locations. But it didn’t take long for her followers to figure out that something is fishy. At a closer look, it’s easy to see that the photos are fake. So, the Instagrammer got bashed by her fans and of course, the whole case got viral.

Check out the feet here:

The cutout here is almost as bad as Samsung’s:

Here too. Plus the weirdly cut umbrella behind her:

Olsson quickly admitted that the photos were fake, but she refused to take them down. She explained that she wanted to post about her trip to Paris, which, apparently, really happened. First, she took a photo herself, but she didn’t like it. She tried adding a different background, posted the altered photo to Instagram, and apparently nobody noticed. So she just went on until people started to notice her terrible Photoshop skills, and of course, the whole thing blew up.

“I just wanted to make that clear that I was in Paris, but I did Photoshop the background, but I’m not going to take them down because it’s a collaboration and they’re nice pictures – it’s a good outfit!”

Considering that there are brands tagged in every photo, I suppose that they’re sponsored, so that’s why she won’t delete them. But I think they should remain on Instagram, deleting them would be like trying to annul her mistake and pretend that it didn’t happen.

Hilarious Photoshop fails happen from time to time, and this is definitely not the first one we’ve seen. Just remember the extra limbs on a Vanity Fair cover. Or those super-huge hands on The Apprentice promotional photos and the giraffe-like neck on the Tomb Raider movie poster. Cases like this serve to give us a good laugh, or sometimes as a reminder that we shouldn’t trust everything we see, because Photoshop is everywhere.

But there’s a “dark side” to the photoshopped images of Instagram celebrities. Okay, even if the Photoshop job is horrible like it is here, it could be difficult to figure it out on a small smartphone screen as you quickly scroll through the feed. These people have hundreds of thousands of fans who follow their “glamorous” life and adventures on daily basis, not realizing that these aren’t real. Many people aren’t aware of how fake everything is on social media, especially youngsters. So, the “lifestyle of rich and famous” makes them feel inadequate, depressed and jealous. This is why I think that the cases like this should be exposed and remind us, common people, that the grass isn’t necessarily greener on the other side.