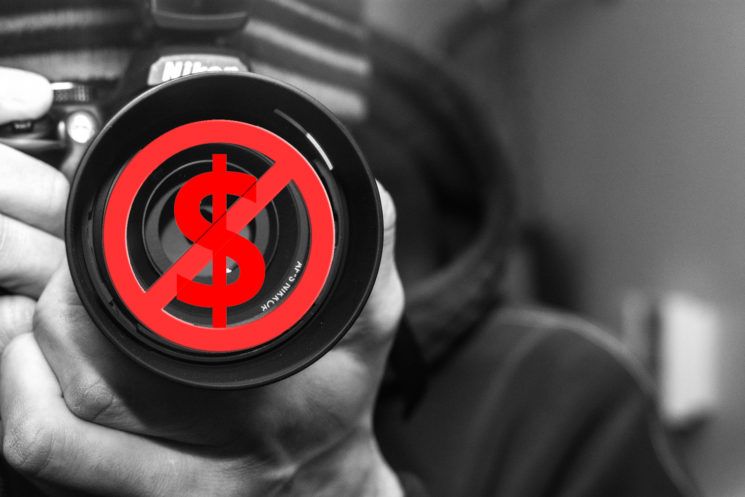 It’s not that rare for self-proclaimed Instagram influencers to feel like they’re entitled to getting freebies. One of them asked Betrothed & Co for a $5,000 wedding photography package, and they wanted it for free, of course. The photographers said no in a brilliant, tongue-in-cheek response, but then the person called them “abusive” and threatened to publicly shame them.

Betrothed & Co is a small UK-based wedding photography business. This June, its owners Frankie Lowe and Laura Dunning received from someone called Melissa, a PR person of an unnamed “Instagram influencer.” Melissa said that her client was planning a wedding for April 2021 and she offered Frankie and Laura a once-in-a-lifetime opportunity to work for free.

Melissa requested the services the mysterious influencer would need, offering nothing in return. Well, let’s be fair not exactly nothing. She offered the promotion of Betrothed & Co to 55,000 of her client’s influencers, as well as at least a 25% discount on their packages. The email tactfully ends with something that sounds to me like a warning. “Just so you are aware, we have approached four other similar businesses in your area so a fast response will be beneficial to your business.” 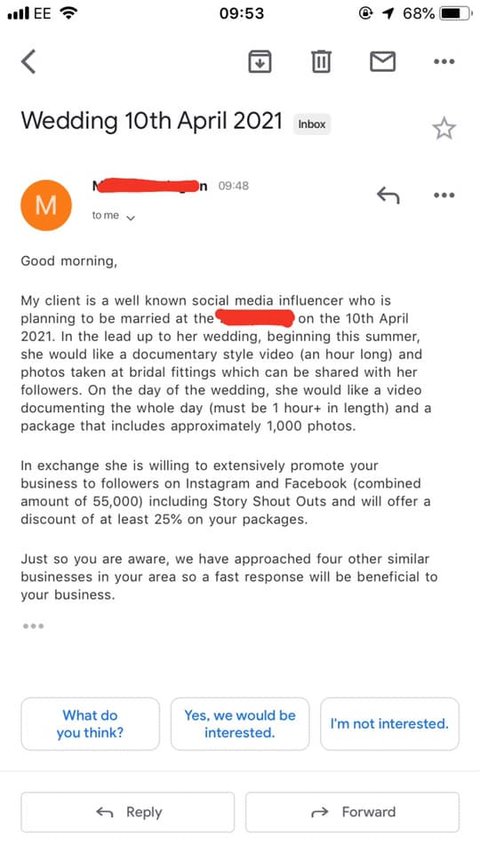 Now, c’mon, ho wouldn’t feel like their work is valued after an email like this? Joke aside, Frankie and Laura didn’t appreciate this “generous offer,” so they rejected it. As I mentioned, I find their response brilliant, with just a right amount of sarcasm. They were wondering if there was a typo in the number of followers, considering that “55,000 is not usually the level of following which can command the free transfer of products worth between £ 3-4K in total.” They added that recommendations from high-value clients would normally help them raise prices instead of having them knock 25% off. Finally, they expressed their appreciation of “how valued as artists and professionals” the email had made them feel. I mean, who wouldn’t feel special to know that the exact same email was sent out to other artists, too? 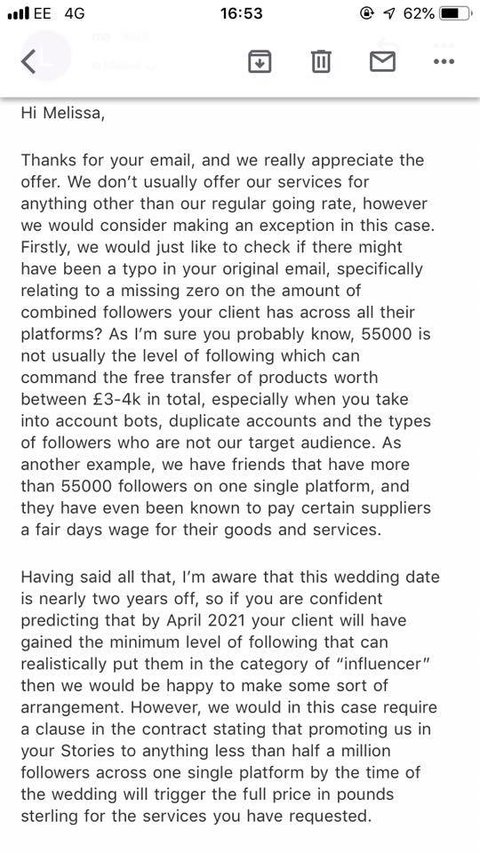 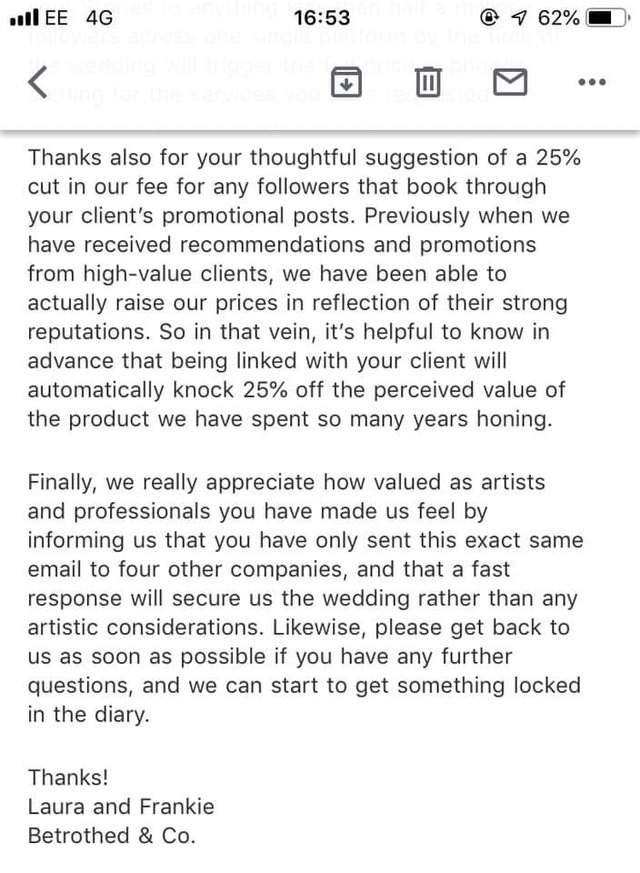 Melissa didn’t seem to receive the response very well. She called their email “unprofessional” and “appalling.” She said that her client will no longer consider Laura and Frankie as contenders to shoot “what would have been a very lucrative wedding” for them. “Other companies had replied with additional offers of goods and services, basically paying us to work with them,” Melissa wrote. She didn’t miss the opportunity to play the guilt-card, randomly adding that the client’s mother has been diagnosed with cancer, which hadn’t been mentioned in the initial email. Finally, she wrote: “Please don’t ever email again as we will have to name and shame you if you continue with this abuse.” Abuse? What? 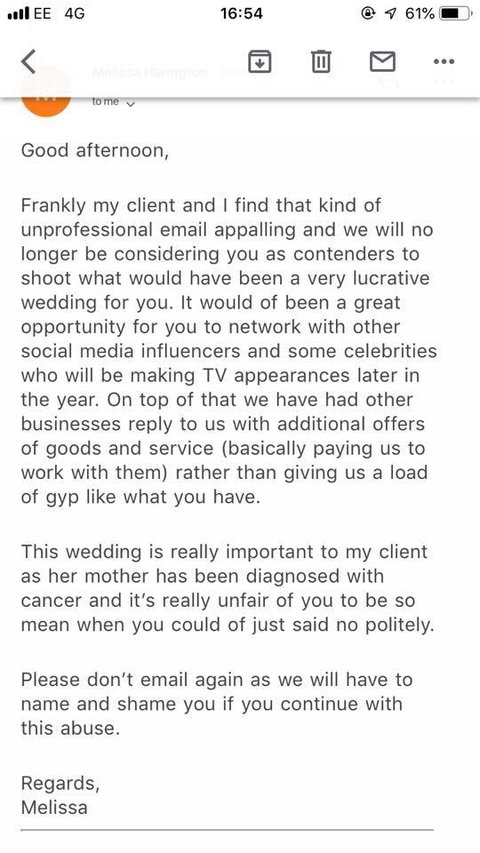 The threat didn’t seem to affect the photographers, so Frankie did email Melissa again. He was polite in this email too, but again being snarky to just the right amount. He stood up for himself and his and Laura’s business, and I believe that he did it just the right way. In the end, he asked who Melissa’s client was anyway. “I’m, like, super curious by this stage!” he wrote. 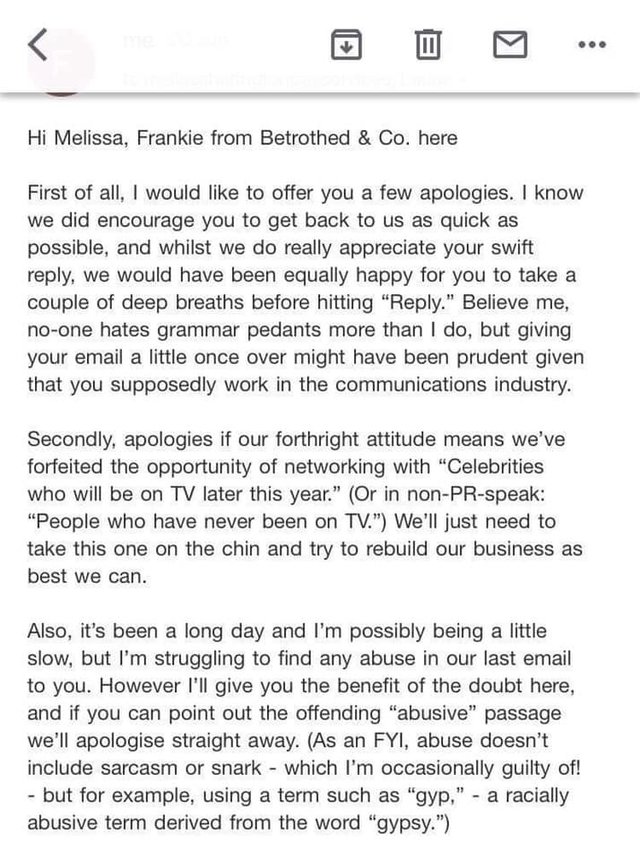 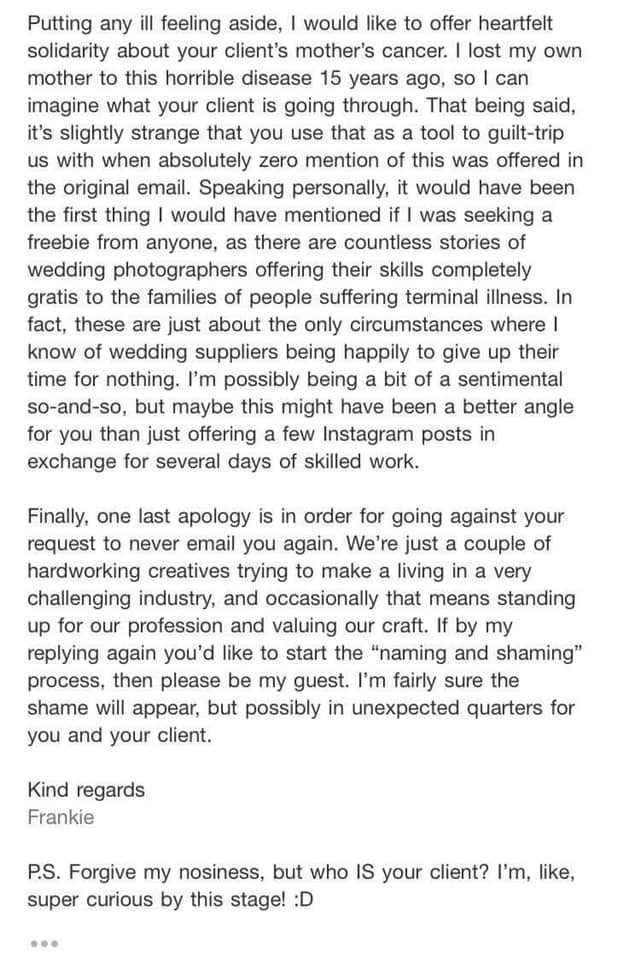 I hope Frankie and Laura get a response because now I’m also curious who the mysterious “Influencer” with such “generous” offers is!