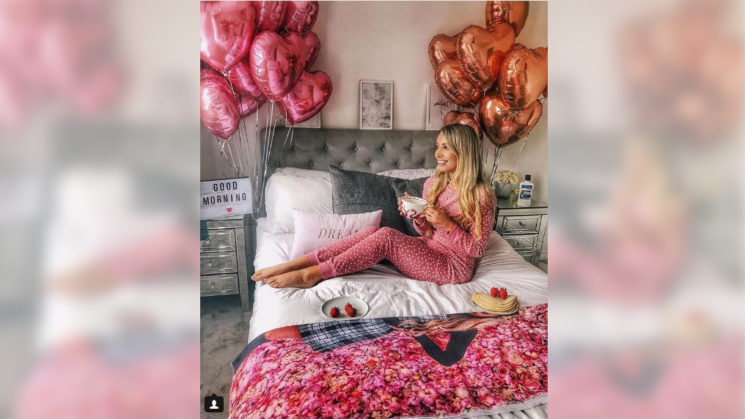 It’s nothing new that Instagram-celebrities can sometimes make “common people” feel inadequate. Lifestyle blogger Scarlett London recently came under fire because of just that, and it all started over a photo of her “perfect morning.” The photo features a stack of pancakes; or, should I say, a bunch of tortilla wraps she presented as pancakes? The photo went viral because of this, but it escalated quickly when people started criticizing her for making her life look “perfect.”

Scarlett posted a photo sponsored by Listerine in which she “starts a day with a smile and positive thoughts.” The positive start of the day includes some pancakes and tea – but Instagram users were quick to notice that the pancakes are actually tortilla wraps and that the cup of tea is actually a cup of thin air. All of a sudden, virtual pitchforks and torches were raised at the blogger.

Someone posted the photo to Twitter where it went viral. The comment with the photo reads: “Fuck off this is anybody’s normal morning. Instagram is a ridiculous lie factory made to make us all feel inadequate.” I’m pretty sure this doesn’t refer to the “pancakes” alone, even though some people commented on them here as well. But, I guess they’re the symbol of just how fake photos like this are.

Fuck off this is anybody's normal morning.
Instagram is a ridiculous lie factory made to make us all feel inadequate. pic.twitter.com/arV7uCusiJ

The comments on Twitter are different, mainly trashing the blogger either because of the tortillas or because of the overall fake vibe of the photo. But the comment that sums up my thoughts is this one: “If you feel inadequate because of an Instagram post made to sell mouth wash. Then maybe it’s time to put the phone or Internet device [down] and go outside.”

If you feel inadequate because of an Instagram post made to sell mouth wash. Then maybe it’s time to put the phone or Internet device and go outside.

Personally, I find posts like this ridiculous. I know and you know that no person starts a day this way. Seeing crap like this on Instagram makes me think of my tangled morning hair, the bags beneath my eyes, and my desperate need for coffee, and I just scoff when I see something as fake as this image. Plus, this is a sponsored post, or in other words, an ad. And no ad is realistic, for crying out loud! However, no matter how much I agree with the comment above and how much posts like this don’t make me feel inadequate, I can understand why people criticize it so severely.

The thing is – many people aren’t aware of just how fake social media is. Especially very young people. We’ve seen cases of girls who have been arrested or went into serious debt just so they can become Instagram famous. There’s research to show that Instagram can ruin self-confidence and mental health in teenagers, too. And it happens exactly because of the posts like this, where everything is made to appear way more beautiful than it actually is.

This is why I like the rare people on Instagram who present reality as it is (mildly NSFW link). Or the amazing Celeste Barber who trolls these “perfect photos” in a hilarious way.

As self-assured adults, I think we shouldn’t give much, if any, attention to fake posts like Scarlett London’s. We should also educate the youngsters about how fake social media are. But teenagers being teenagers, they are insecure and could still think that crap like this is real. For their sake, I think that photos like this should be criticized. Even when the pancakes are real.