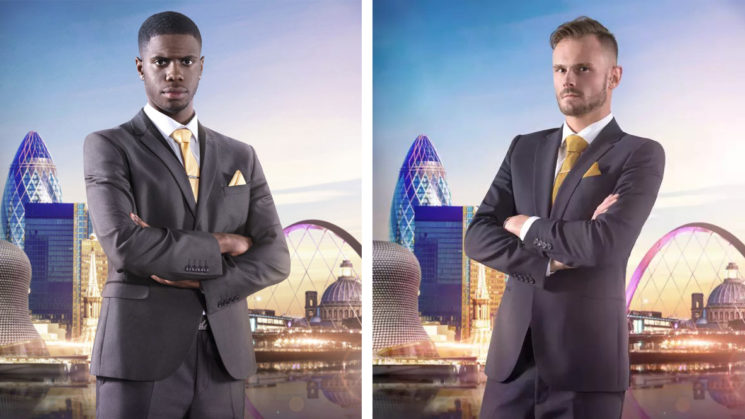 We’ve seen plenty of Photoshop fails in promotional posters or magazines (and this is my absolute favorite). The latest fail has been spotted in promotional pictures for The Apprentice, where fans noticed that some contestants look like they have three hands. Of course, people were quick to joke about it on social media. But BBC claims that it’s not a Photoshop fail, but that a “lightning illusion” is to blame.

In the promotional photo that first caused a stir, a candidate Kayode Damil stands with his arms crossed. But, it looks like his hand has been split in two, appearing both underneath and above his folded arm. As a result, it looks like he has three hands. Or a really long left hand.

Have spent the entire day laughing at this guy with three hands on #TheApprentice pic.twitter.com/O0OMdJeJR7

Of course, someone tweeted about this, and it provoked tons of jokes and comments. Then, someone noticed that another contestant, Frank Brooks, also has a quite freakish hand in his promo image. “Alan, you need to fire the Photoshop guy,” Dom Graham wrote on Twitter.

Alan, you need to fire the Photoshop guy. Wtf is going on with their hands? #TheApprentice pic.twitter.com/sGUtVTqGfv

Watch out for this guy too. His right hand is huuuuuge. They're all freaks! pic.twitter.com/hPi5UyVxHs

The comments on the photos are gold and they gave me some good chuckles (along with the photos). But BBC reportedly claims that bad Photoshop isn’t to blame. The Telegraph reports that this happened because of “an odd lighting illusion” and that it was “merely a trick of the camera.”

I keep looking at the images and can’t help but wonder: what kind of a “lighting illusion” makes you look like you have an extra hand or freakishly long hands? To me, it still looks like a bad Photoshop job. What do you think?

DIYP Reviews A 34 Inch 21:9 UltraWide Display for Photography & Video: Hands on With The LG 34UM95