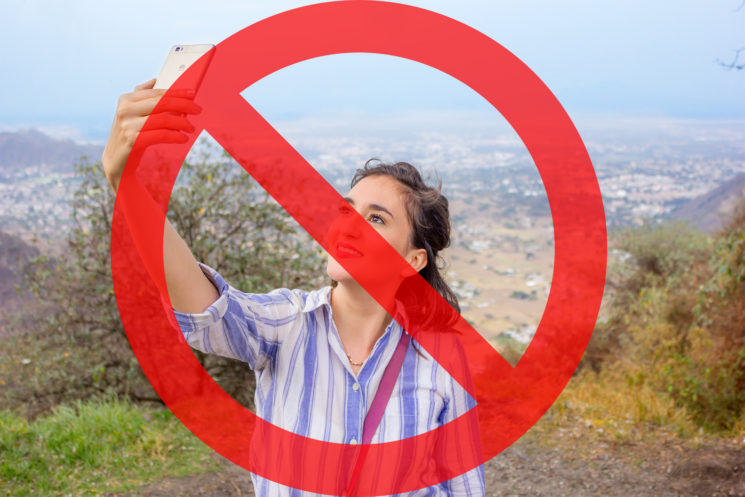 Plenty of selfie-related accidents and deaths happen each year, and the majority of them occur in India. In an attempt to increase safety at popular tourist spots, the country is about to introduce “no-selfie zones,” where visitors, as you can guess, won’t be allowed to take selfies.

According to research, between October 2011 and November 2017, there have been 259 selfie-related deaths in 137 incidents. The researchers have spotted an exponential increase in these accidents and they blame it on several factors. First, there’s the technological advancement, which has increased the popularity of selfies according to the study. Also, the introduction of selfie sticks had the influence on the statistics. And finally, there are events that promote selfies through “best selfie prize.”

The selfie-related deaths mainly occur among the young (under 30 years of age). Considering that a high share of the young population resides in India, it’s no surprise that it’s t first country on the list when it comes to deaths caused by selfies.

In an attempt to stop the tragic phenomenon, Mumbai police already proclaimed 16 “no-selfie zones” a few years ago in some of the major tourist locations. Digital Trends writes that the signs have started to emerge in other places as well. For example, some cliffs and beaches in the Indian state of Goa have been marked as “no-selfie zones.” At the same time, local officials on Mount Merapi in Indonesia are reportedly preparing a “safe selfie spot.” This is a safe place where the visitors will be allowed to take selfies without the risk of getting killed.

“Selfies are themselves not harmful, but the human behavior that accompanies selfies is dangerous,” the researchers write. They believe that, above all, people should be “educated regarding certain risky behaviors and risky places where selfies should not be taken.”

I agree with certain conclusions regarding behaviors and education. Indeed, it’s not dangerous to take a selfie per se, but putting yourself in a life-threatening situation just to take a photo is what makes it dangerous. As for the education, I can’t say I completely agree. I’m pretty sure people are already aware when they’re doing something dangerous for a selfie… But the “hunger for likes” is what makes them do it anyway. And sadly, it sometimes ends fatally.

When it comes to “no-selfie zones,” I think it can be a good thing if those who break the rule at these spots get to pay a fine. But otherwise, I don’t think it will decrease the number of selfies or selfie-related accidents.

« The Apprentice photoshopped photos display impossible hands. The show claims “lighting situation”
There is now a website that lets you get (and give!) honest feedback on photographs »