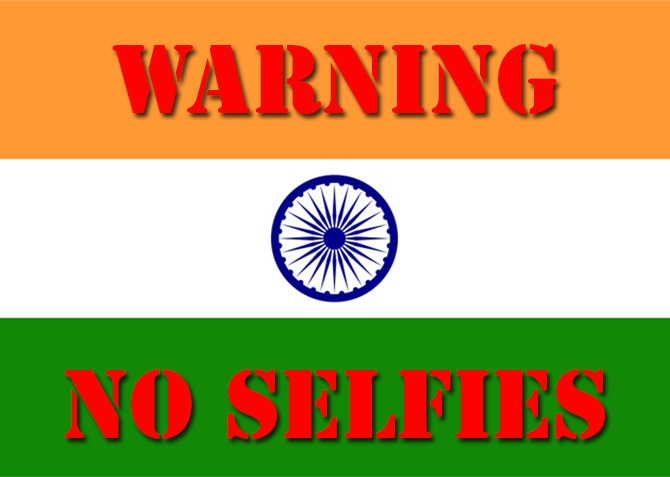 While India’s population accounts for roughly 17% of the world’s population, about half of the 27 or so selfie-related deaths that occurred in 2015 were in India.

Trying to stop the tragic phenomenon, Mumbai police announced they’ve identified 15 where “selfies can be dangerous” and have announced them as being “no-selfie zones”.

To do so, the city’s municipality will be requested to deploy lifeguards and put up warning signs, and police will be giving warnings.

The decision came after three teenagers were swept into the ocean on Saturday while taking selfies in the rocky area of the Bandra area, The Washington Post reports.

One of the girls, as well as a man who jumped in to save them, most likely did not survive.

“The police will now approach the city’s municipality to prevent accidents at such spots due to people taking selfies. The municipality may deploy life guards and install warning signs,” Mumbai police spokesperson Dhananjay Kulkarni told the BBC.

Violators, however, will not be fined – perhaps due to some of the zones including major tourist attractions, such as the iconic sea-facing Marine Drive promenade and the popular Girgaum Chowpatty beach.

“We will make people aware (of the guidelines) through our Twitter account and our website,” the spokesperson told NDTV. I imagine these guidelines will be somewhat similar to Russia’s “Safe Selfie” guidelines.

This is not the first time India establishes “no-selfie zones”. Certain areas of last year’s Kumbh Mela, a mass Hindu pilgrimage, also banned selfies as organizers feared they would create bottlenecks and lead to stampedes.

Selfies are hugely popular in India, in case it wasn’t obvious by now, and the country’s prime minister Narendra Modi is well known for his fondness for them.

Took selfies with young friends at CNES. We were all trying to take the best selfie out there. pic.twitter.com/xPmKNCgi3G

Speaking of the number of selfie-related deaths in India, Rob Long of Ricochet makes a very interesting point:

“it’s saying something, isn’t it, that India, birthplace of two major world religions, both of which posit that the self is merely a vessel to be reincarnated endlessly and that it doesn’t really exist, has become obsessed with the selfie?”

To be fair with India, though, it should be mentioned that not all selfie-related deaths in the country involved locals. One case included a Japanese tourist who fell and died at the famous Taj Mahal.

We already know that selfies claimed more human lives last year than shark attacks, but we now know that in India alone more people died due to selfies than the number of death caused by the global shark population.

If you need further proof that sharks aren’t as evil and sinister as many believe, have a look at Von Wong’s latest project were he tied down a model to photograph her with Fiji’s sharks. You can also sign the petition to help save the sharks.