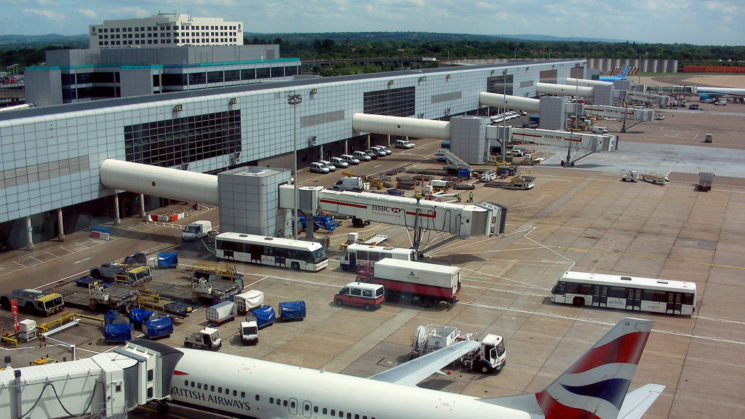 Less than a week ago, we posted about a possible drone collision with an incoming flight at an airport in Mexico. Now, we read about confirmed idiot sightings at Gatwick Airport in London, England. According to the BBC, at least two drones were spotted flying near the airport, which prompted them to ground all flights and shut the place down.

This shutdown has stranded around 10,000 passengers, with a further 6,000 diverted, and 4,000 on planes that didn’t take off, says Mail Online. Many were forced to sleep on the planes in which they were trapped. Up to 100,000 people are facing disruption today.

Gatwick Airport posted this to Twitter shortly before 4am this morning.

As the UK’s second busiest airport after Heathrow, Gatwick says that around 100,000 passengers on 760 flights were due to use the airport on Thursday (today). Police were still hunting for the drone operator when another device was reported just before 7am (three hours ago). Gatwick’s chief operating officer Chris Woodroofe told the BBC that police did not want to shoot the drones down due to the risks posed by stray bullets.

The shutdown started around 9pm on Wednesday when two drones were spotted being flown over the airfield. The runway was briefly reopened around 3am and was forced to close again around 45 minutes later after reports of “a further sighting of drones”. In the UK, it is illegal to fly a drone within 1km of an airport or airfield boundary.

1/2 Thurs 09.15: All flights to and from Gatwick are suspended due to ongoing drone activity activity around the airport. Unfortunately, there are significant delays and cancellations to all flights today.

2/2 Please do not travel to the airport without checking the status of your flight with your airline first. We apologise to everyone affected, but the safety of all our passengers and staff is our no.1 priority.

Planes expected to land at Gatwick during this time were diverted to London Heathrow, Luton and Manchester, although airlive.net reports that some were rerouted as far away as Cardiff, Paris and even Amsterdam.

LIVE: All inbounds to London Gatwick holding or diverting due to reported drone activity in the area. Police as well as airport security investigating. pic.twitter.com/ULp6ptx4JG

As of right now, Gatwick airport is to remain closed until at least noon GMT (a little under 2 hours from now).  Airport bosses say they will not reopen until they are sure that the threat is gone. Over 200 flights have been cancelled or delayed. Drone users in the UK who fly within 1km of airport boundaries face up to 5 years in prison.

The closure of Gatwick Airport for 12 hours now due to drone flying appears to be a deliberate criminal act with geofencing breached. I’ve previously raised this issue in Parliament and will be again. The sentence is now 5 years in prison but further efforts are clearly required.

Although no actual collisions have been reported, this event will no doubt play a big part in shaping and further restricting, future drone laws within the UK, and possibly the rest of the world as a preemptive move.

There’s no other way to describe what’s happened as anything other than sheer selfish stupidity on the part of the drones’ owner or owners. And the worst part about it is, even if the UK’s drone laws are toughened up after this event, the people doing this are exactly the kind of morons that won’t care and will carry on regardless.

What they’ve done and are doing is already illegal. That hasn’t stopped them so far. It’s everybody else, the mostly responsible drone flying community, that will suffer.

This event is still ongoing, and Sussex Police are still investigating the incident. We’ll update you as we know more.

Update: Mail Online is reporting that the noon reopening was pushed back until 4pm. Shortly before 4pm, the drone appeared again, and the airport now remains closed, stranding 110,000 people at the airport, which they now say is “at capacity”. The pilot is evading police snipers, whom they believe may be located as far as five miles away from the airport.

Update: 21st December. BBC News reports that the drone has not been seen since 10pm last night, and that Gatwick has now reopened and the first flights have started to leave. The drone pilot is still yet to be found.

« Astrophotography: How I shot Comet 46P from start to finish
Instagram star bashed for photoshopping herself to different locations in Paris »