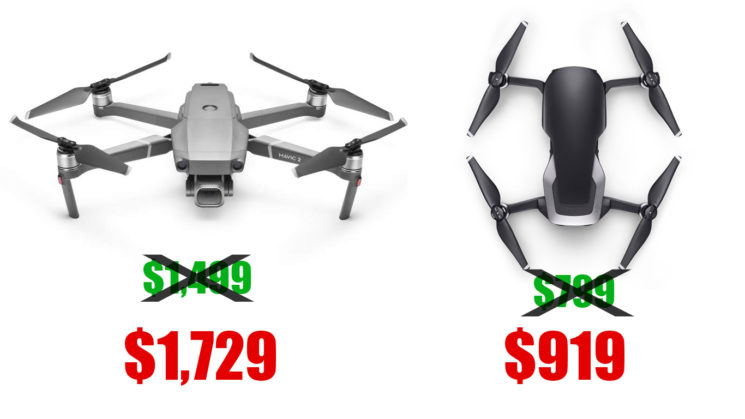 The Trump administration’s latest round of tariffs applies 15 percent tax on goods imported from China. The decision took effect this Sunday, and in response, DJI has raised prices in the US by roughly 13 percent.

The price changes were first spotted and by DroneDJ. Some drones are out of stock on DJI’s official website, and the prices have gone up for others. The prices have increased by roughly 13 percent for the Mavic line. For example, DJI Mavic Air Arctic White went from $799 to $919. DJI Mavic 2 Pro went from $1,499 to $1,729. The Verge adds that prices for Inspire and Matrice 600 Pro have increased by nearly 17 and 14 percent respectively, compared to the prices in Canada.

A DJI spokesperson confirmed to The Verge that the price increase is a consequence of the recently increased tariffs. “We take many factors into account when recommending retail prices in different countries around the world, including tariff applications, tax rates and currency exchange fluctuations,” they explained. “We follow all applicable laws and regulations in the countries where we operate and will continue to work toward making drone and handheld products more accessible to the world while supporting the many existing customers that use DJI technology daily.”

I believe that the price increase was a logical and expected move from DJI after the new tariffs have been applied. Sadly, the cost of these tariffs has been passed onto consumers. The Verge notes that this is the first reported case of a Chinese gadget manufacturer doing so, but there are likely more to come.

However, if you want to buy some DJI gear at old prices, you still have a chance. While the drones have already got more expensive on DJI’s website, you can still find them at pre-tariff prices on Amazon. Some drones are out of stock in DJI’s official store, but you can find them at other retailers. For example, the DJI Mavic 2 Pro is still $1,499 and the Mavic Air (Onyx Black) is $769, and it’s not available in DJI’s store at the time of writing this. The same goes for B&H, where the prices have remained unchanged and there’s a larger choice of DJI drones available. I guess that, when they’re out of stock, these retailers will increase prices, too.