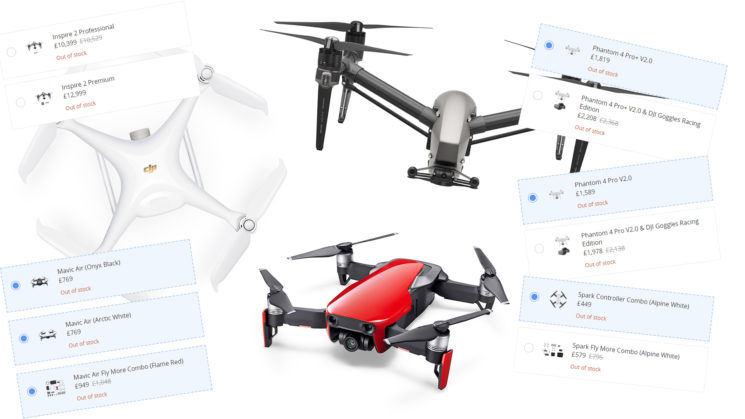 Whenever a product goes out of stock for any period of time, it’s usually an indication that its replacement is on the way. And if DJI’s online store is anything to go by, they’re getting ready to announce a few. All package variants of the DJI Spark and DJI Phantom 4 are completely out of stock, with many Mavic Air, Mavic 2 and Inspire 2 packages also gone.

In the UK online store, I see a few others missing, too, including the Mavic Air Fly More Combo (Flame Red). Now, there have been a few rumours lately that the DJI Spark is about to be replaced with a DJI Mavic Mini, which would make a lot of sense, as the Spark’s been out for a couple of years now, and is due for a bit of a refresh.

As for the Phantoms, B&H listed the Phantom 4 Pro V2.0 as being “Discontinued” a few months ago, although DJI denied it at the time – even though their own online store also said it was out of stock back in April, as well as other retailers. If the Phantom 5 is on the way, then they’ve managed to keep it very well under wraps.

Perhaps most surprising are the Mavic Air and Mavic 2 drones being listed as out of stock. The Mavic Air is still an awesome drone for what it costs and keeps up very well with the needs of its target market, and the Mavic 2 Pro and Mavic 2 Zoom aren’t exactly that old. The Inspire 2… Well, that one I can’t explain.

It’s possible that there could be an issue in the DJI supply chain for components common to all of their models. But I think replacement models being announced is a more likely scenario. DJI is working on adding helicopter and airplane detection to its drones from all models released after January 1st 2020. That’s only just over 3 months away, so it makes sense that DJI is redesigning their entire lineup to include this as soon as possible.

Whatever the reason, with the holiday season just around the corner, they’re going to need to do something quickly to pull in that seasonal spending money.

Which drone in DJI’s lineup are you most excited to see updated?