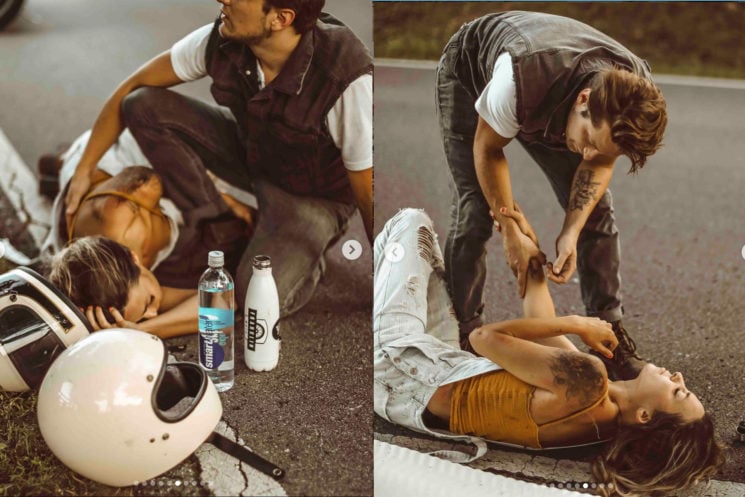 Nashville-based lifestyle blogger Tiffany Mitchell recently posted professional photos of a motorcycle accident she had. As if posting (and even having) such photos wasn’t weird enough, they also contained conveniently placed bottles of water. Because of this, the post seemed like it was sponsored, and she received lots of criticism from the community. People have been calling her out for glamourizing an accident, even for staging the whole thing for the sakes of product placement.

A few weeks ago, Tiffany posted a series of images of the ride and the accident. The first few photos showed her and her friends being all happy and carefree, posing on their motorcycles. Then, there were a few very… glamorous shots of Tiffany lying on the ground, seemingly in pain. There was a man helping her, with two helmets and a motorcycle also in the frame. The original post came with a lengthy caption, reading the following:

This is me and my bike about an hour before I got into an accident. If you watched my stories Sunday you know all about it, but if you didn’t, here’s the scary, magical series of events. A few of us rode down to Liepers Fork Saturday to explore and take pictures. My sweet friend @lindseygracewhiddon was shooting and my OTHER sweet friend @martynmazz was riding while a friend of Lindsey’s drove the Jeep. We played around for a couple hours before heading back up to Nashville around 7:30, and on a secluded two lane stretch, I misjudged a curve, took it too fast and my bike went off the road. It slid through the grass and I hit the pavement. I had my helmet on so my head was fine, but I scraped up my left side. I was in absolute shock laying on the side of the road. Scroll through the pics to see how much of it Lindsey captured! Unreal. I was scared, and relieved, and so thankful I could move all my joints and that I never lost consciousness. My friends were at my side immediately, an ambulance arrived within 10 minutes (CRAZY fast), and sweet strangers loaded my bike onto their trailer to haul it back to my house for me. I was in a haze the entire time. Losing someone in a moto accident makes something like this that much sharper. It brought back a lot of memories from 3 years ago when Kappel died and I in utter devastation had to decide how to move through it all, and whether it was worth it to ever get on a bike again.

We all drove back to my house with a green light from the angels that cleaned me up in the ambulance, sat with our new friends listening to music and laughing until I fell asleep. I felt so comforted. The next day I could barely move I was so sore, and I texted my mom (who raised me on the back of HER motorcycle) to tell her what happened. I was so nervous but her response was magic. She asked if I would ever ride again, I said yes. She told me she was so glad I was ok, and that she’s had her share of close calls too. Then she said it all, “Life is a gift and an adventure.” YESSS. ?????

I’m resting and healing up my arm, and @ianwhitetattoos may need to touch up my wildflowers, but I am feeling so much better and guys, I am beyond grateful.

Just posting these photos caused a backlash, but it seems that the water bottles were the final straw. They were placed and photographed in such a way that everyone would think Tiffany used the opportunity to make a promotional post. Naturally, people then started to suspect that even the accident was staged. After all, Instagram is so full of fakery that it probably wouldn’t be strange if this was true.

Some people are calling out Tiffany for not wearing the helmet and proper gear. When you’re on a motorcycle, a short-sleeved shirt is definitely not the best choice. There are also people who doubt that her injuries are genuine and that they should look way worse. Then, some can’t figure out how her helmet magically changed colors. In the first photo, she poses with a silver helmet, and the one she wore when the accident happened is black. There are those judging her friend Lindsey for snapping photos instead of helping Tiffany. And of course, many people are pointing to the conveniently placed bottles of Smart Water. 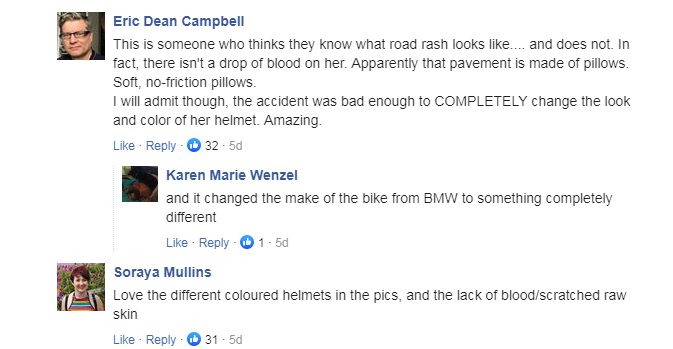 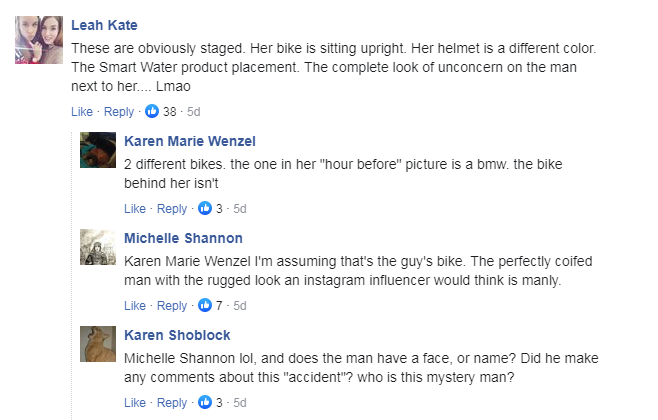 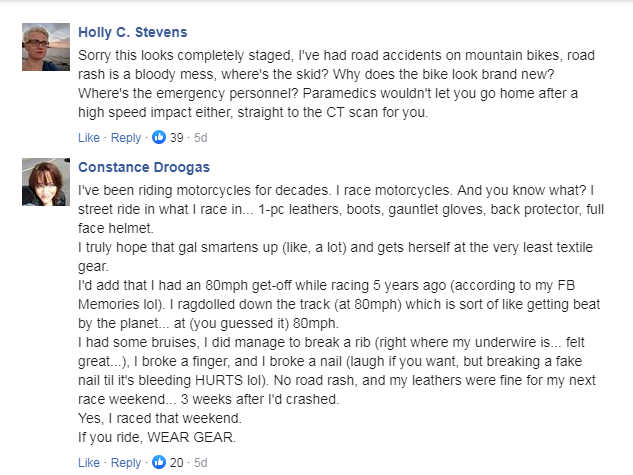 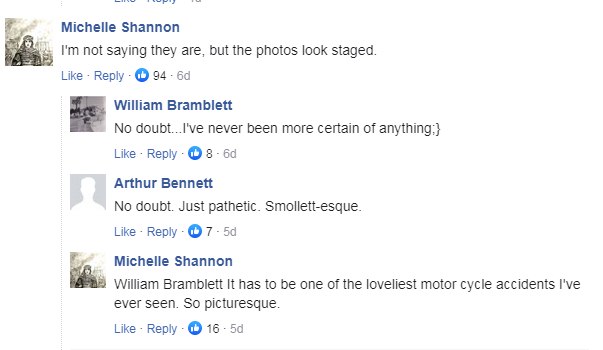 I must admit that the whole thing looks really fishy on first sight. However, BuzzFeed got in touch with Smart Water, and the company claims that they don’t have a sponsorship agreement with Tiffany. The blogger herself posted an Instagram story explaining what happened.

Tiffany claims that she and her friends were driving slowly, which is why she didn’t end up with more serious injuries. Also, it was a very hot day, so she didn’t wear a leather jacket. She adds that she absolutely did wear a helmet during the ride and the accident, and she took it off after realizing that her neck was okay. As for the color change, she says that the black helmet is hers and the white one belongs to her friend Martyn (the man standing beside her). Although she doesn’t explain how the helmet in the first photo was silver, I guess she uses one for posing, and the other for riding.

When it comes to water bottles, Tiffany says that someone brought them to her considering that she was injured and in shock. As for her friend Lindsey who took the photos, Tiffany says that everyone rushed to her to see if she was fine. According to her, Lindsey always documents everything, so she snapped photos of the accident, too. Tiffany claims that she wasn’t aware of it, but Lindsey only showed her the photos later. She was “grateful” for having them, and she decided to post them, along with some backstory. But as she claims, many people misinterpreted her intention.

Finally, Tiffany showed off her bruises, scratches and the damage on her helmet and motorcycle. Although she, fortunately, wasn’t seriously hurt, she still ended up with some pretty bad bruises and scrapes. 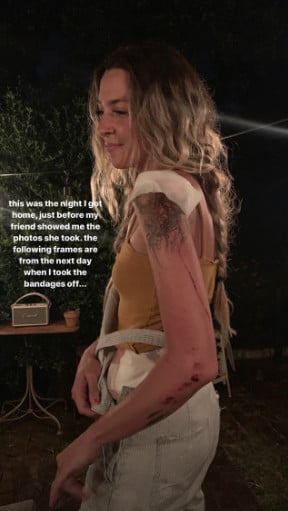 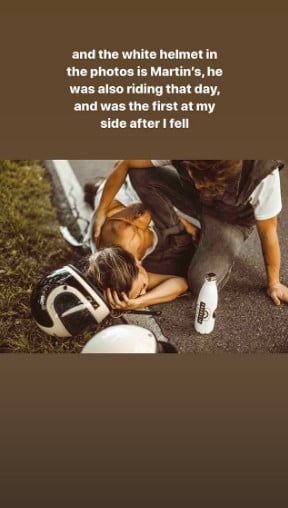 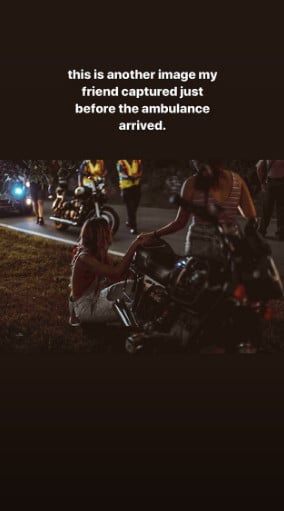 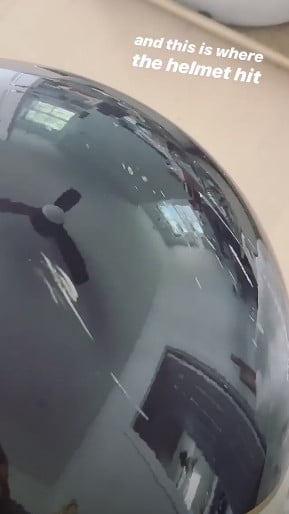 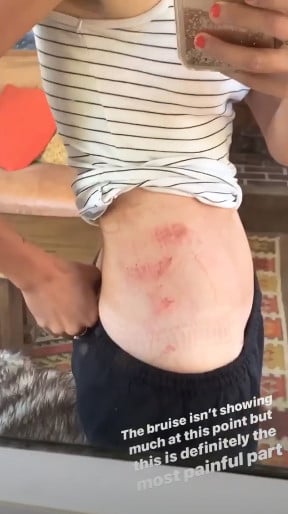 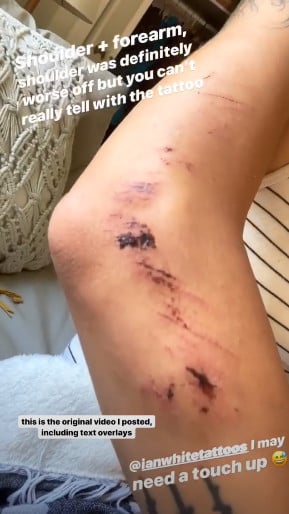 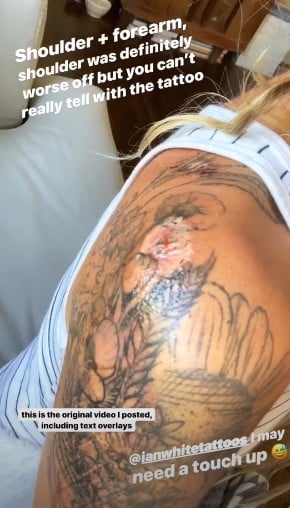 Tiffany lost a partner in a motorcycle accident three years ago, so these photos were meaningful to her in some way. Still, she archived the original post after a while because she didn’t want to receive any more hateful comments on “something that personal.”

Honestly, I believe that Tiffany indeed had an accident, but she was lucky that she wasn’t driving fast. To me it seems like she fell at a very low speed, judging from photos and videos on her Instagram story. As for the water bottles, one of the first things I do when I see someone who’s mildly injured, I bring them water. They either need to drink some, or to clean the wound a bit. If this was the scenario in Tiffany’s case, then her friend took a photo in a very inappropriate way considering the occasion. Also, if I had a friend who was snapping photos while I was lying on the ground in pain, I would seriously reconsider that friendship. But that’s just my two cents.

The text from Tiffany’s post was posted on Reddit, and you can also see the photos here, so you can judge for yourself. I honestly believe that she had the accident, but taking and publishing those stylish photos is, in my opinion, just wrong.

« DJI is running out of stock – could new drones be on the way?
FogCam, the world’s oldest webcam, is being shut down after 25 years of service »