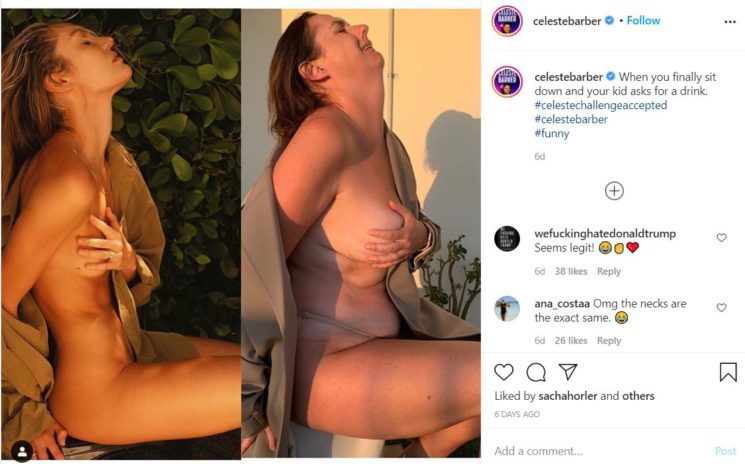 No matter how hard some influencers try to debunk the myth of “the perfect body,” there will always be those who promote it. Heck, even Instagram itself seems to prefer skinny, model-like women over us regular gals. The platform recently banned users from sharing Celeste Barber‘s semi-nude parody photo. It wouldn’t be a problem if the original image of a model Candice Swanepoel weren’t left untouched. After the scandal, Instagram quickly came under fire for “fat-shaming” and “double standards.”

If you don’t follow Celeste Barber, she is an Australian comedian who creates hilarious parodies of model photos on her Instagram account. In her recognizable manner, she recently shared a side-by-side photo of Candice Swanepoel and her parody image captioned: “When you finally sit down and your kid asks for a drink.” Both photos show the same body parts exposed, with Celeste wearing panties. Still, her photo got flagged by Instagram, preventing users from sharing it.

Celeste’s photo reportedly “goes against our community guidelines on nudity or sexual activity,” as Instagram notified a fan when they tried to share it. The Guardian writes that Celeste shared a screenshot she received from the fan, writing: “Hey Instagram, sort out your body-shaming standards, guys. It’s 2020. Catch up.” She shared another side-by-side photo two days ago, captioned: “Oh hi, just out here checking on your double standards.”

Celeste’s case isn’t the only one. Back in June, plus-size model, Nyome Nicholas-Williams posted a topless photo of herself, with her arm covering her breasts. Instagram censors nipples (only female ones, though), so you would think a photo like this should be fine. But no, her photo was quickly removed. This resulted in a movement #iwanttoseenyome and a petition for Instagram to “stop censoring fat black women.”

I don’t follow many accounts on Instagram, but I have the Explore feed and tons of ads. And I noticed that there are tons of model-like ladies in those posts sharing provocative, semi-nude photos. I personally don’t mind images like that. But I wonder how come they’re not reported, while their versions showing a chubbier woman are. Celeste Barber’s parody may be just one example, but it’s a perfect illustration of Instagram’s preferences. And if I may add, it’s also ironic that Instagram allows male yet censors female nipples. It has been especially fun this month, as October is known as Breast Cancer Awareness Month. But I’ll leave this for some other time.

Ironically, Instagram has created so many tools that should prevent bullying… And I wonder when the platform itself will stop bullying women and make room for all of us, all body shapes, skin colors, and genders.