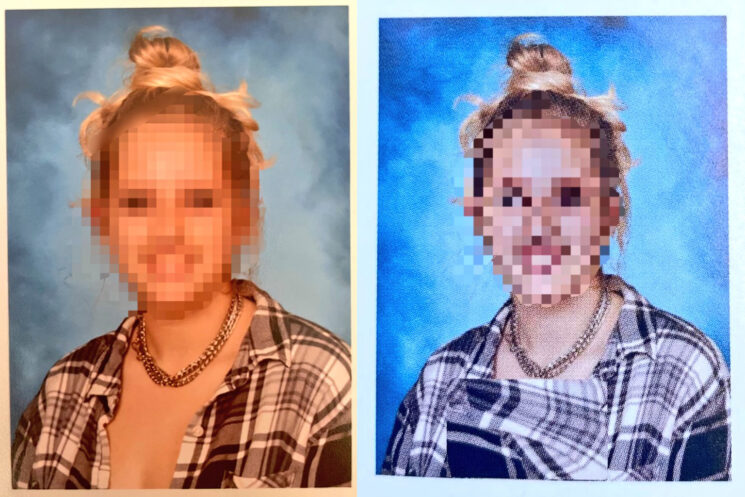 Bartram Trail High School in St. Johns County, Florida recently came under fire for photoshopping girls’ bodies in yearbook photos. After their yearbook was published, 80 female students reported that their photos were altered to remove any hint of cleavage. The students and their parents got furious, and so did the public.

Riley O’Keefe, a ninth-grader at Bartram Trail, first noticed the poor Photoshop job done on her yearbook photo. There was a black bar added to her image to cover her chest.

This is a before and after yearbook photo taken of Bartram Trail 9th grade high school student, Riley O’Keefe.

She says it was deemed inappropriate by the school and photoshopped in the printed edition.

Parents and students are now asking for a major change.@ActionNewsJax pic.twitter.com/f8MjkZMDOw

After going through the yearbook, she found plenty more photos with the same modification. After the initial laughter of disbelief, there came fury. As Riley told The New York Times, other girls approached her and said that these alterations made them feel sexualized and exposed.

The story soon hit the news, with parents and students asking for an apology. Ben Ryan of Action News Jax interviewed the students and tried reaching out to the school officials, too. However, none of them was reportedly available for an interview.

The school did issue a statement regarding the case, though. It reads that the school previously didn’t include student photos in the yearbook if they violated the student code of conduct. “The digital alterations were a solution to make sure all students were included in the yearbook,” the statement reads. Still, the school is offering refunds to all the parents who have a problem with this solution.

When I reached out the school for answers, I was given the following statement:@ActionNewsJax pic.twitter.com/04Y6ULFLzY

So, the problem is that the girls didn’t respect the dress code. Still, both parents and students told Ben Ryan that this isn’t true. The girls reportedly didn’t get dress code violations when wearing the same outfits before. One mom said that her daughter wore it “like 50 times and never got in trouble.”

Interestingly enough, there are some photos of a swimming team wearing Speedos, which were completely unaltered. And yeah, you got it right – those photos feature boys. Only photos of girls were (poorly) photoshopped to hide any “inappropriate” bits.

All of these photos appeared in the Bartram Trail HS yearbook, but only 1 was digitally altered because the yearbook coordinator believed it violated the student code of conduct. In total, 80 photos were "adjusted" in the yearbook, all featuring female students. #News4Jax @wjxt4 pic.twitter.com/j1YCblxjjE

“The double standard in the yearbook is more so they looked at our body and thought just a little bit of skin showing is sexual,” O’Keefe told Action News Jax. “They looked at the boys, for the swim team photos and other sports photos and thought that was fine, and that’s really upsetting and uncomfortable.”

This whole scandal reminds me of those music album covers that were photoshopped in the Middle East to appear more… modest. Or even worse, when an Iranian streaming website removed women from their album covers. It makes me feel like we are not that far from living in a world from The Handmaid’s Tale. And it reminds me that we live in the world of double standards in which women usually draw the short straw.

If this was your daughter or you in these photos, how would you react? How would you deal with it? I think I’d be pretty vocal about it, and I’m curious to hear your thoughts.

Is This a Photography Industry or a Girls’ Middle School Bathroom