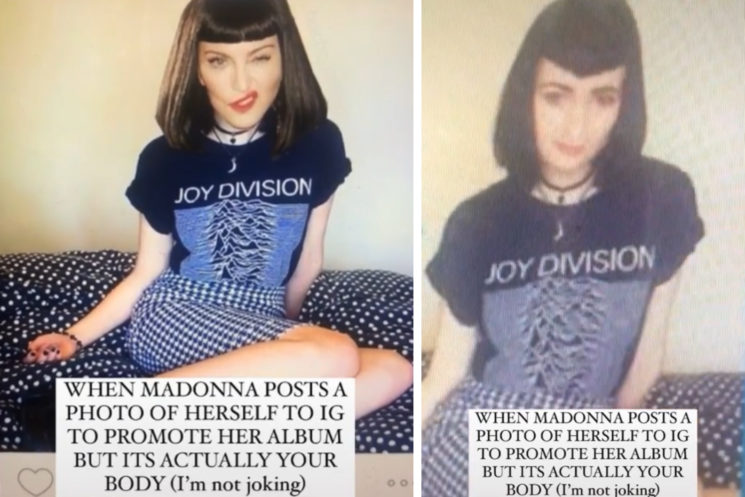 Madonna recently came under fire for sharing a poorly photoshopped image of her head on another woman’s body. I honestly don’t know what’s weirder – the awful Photoshop job, the publishing of this image on Madonna’s official Instagram page, or the fact that it was published in 2015 and only got viral now.

The body in the photo belongs to Australian digital creator Amelia Goldie. This whole thing blew up when she published a TikTok video captioned, “When Madonna posts a photo of herself to IG to promote her album but it’s actually your body (I’m not joking).” The video shows the two photos side by side, and you can see that the body, indeed, comes from Amelia’s photo.

This video has amassed over 2.1 million views at the time of writing this, putting the image on Madonna’s Instagram in the center of attention six years after it was published. And yes, it’s still on the pop star’s Instagram.

So how did Amelia find out? Well, she says that some of her friends drew her attention to the image on Madonna’s page. She says that she first thought it was some sort of a joke, but then realized that it couldn’t be. It was on Madonna’s official social media, and it had been there for years. The artist says that she contacted whoever runs Madonna’s Instagram, but never heard back. And since she discovered it six years after publishing, I think it’s safe to assume that no one had asked for her permission. As you can see in Madonna’s photo, no one credited Amelia either.

Amelia isn’t sure how and why this image ended up on Madonna’s Instagram. But while it looks like a poor Photoshop job, it seems to me that it was deliberate. It was posted to promote Madonna’s album Rebel Heart back in 2015. “So what?” you may ask. Well, the posts used for this purpose all feature Madonna’s head on different bodies. Although they look like collage work in other cases, not like a six-year-old’s Photoshop attempt.

The problem with the recently-reemerged image isn’t just bad editing. In fact, it’s the least of a problem if it was deliberate. What bothers Amelia is that, whoever made the composite, didn’t credit her. If it rings a bell, the same thing happened when Madonna used illustrator Danny Quirk’s work, also for the Rebel Heart promotion.

As I said, it’s weird that Madonna’s team chose to publish a photo like this, and I find it equally weird that it caught people’s attention after six years. But it’s a big no-no to leave out the credits and not ask photographers for permission to use their images. So I’d say that the image deserves all the negative attention it’s been receiving lately. Ironically, Madonna once said that Instagram had been made to make you feel bad. Apparently, her Instagram profile makes some artists feel bad since they never got credits for their work.