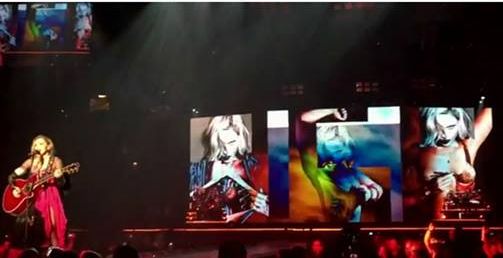 As artists, we find the ‘Fair Use’ doctrine to sometimes be beneficial, but sometimes to be extremely disturbing. I guess illustrator Danny Quirk subscribes to the latter according to a post he made concerning Madonna using his work on her shows under that doctrine.

Danny has a series of illustrations called Dissections which shows medical sketches (the kind you find in old medical books), combined with living humans. This was his senior project for Pratt institute.

Danny claims that an artist called BessNYC4 [NSFW] pasted a photo of Maddona’s face on his drawing and that they were used in her social media. Any many young artists, Danny was first very happy for the fact that his art was so widely exposed. But then he realized that he was not getting any credit for his illustrations. Danny claims that he tried contacting Maddona’s agent and got no response.

Danny got even angrier when he discovered that those illustrations were also used in Madonna’s shows. Being annoyed he posted about it until his lawyer told him to take the post down as BessNYC4’s work was protected under the Fair Use doctrine for being transformative enough.

Danny got annoyed enough that he shared his frustration on his page which got thousands of likes, shares and comments. I am attaching his letter after the jump.

First and foremost … I just want to deliver an open, and honest “FU¢K YOU” to the “Fair Use Act”, and an ACTUAL “what the FUK!?!?” to those it protects. Almost a year ago to date (Jan 2015) I awoke to a barrage of texts stating my work was popping up on Madonna’s FB, IG, and Twitter, with tens of thousands of likes, shares, comments, etc. ! ! At first, I thought … “WHOAH! / COOL!“ but shortly there after, it sunk in. I contacted her agent, and received absolutely no response. In the meantime, I found out digital collage artist BessNYC4 was the one who ‘made’ the work, sending it to her, merging MY ART with her head, and reaping all the benefits.. Things petered out, and I more or less forgot about it; u n t i l … early Oct 2015. I found out (for all intents and purposes) my art was used in her concerts, despite my attempts at getting proper credit acknowledgment, etc. I made a post to build momentum / got a lawyer, and was hoping for justice. My lawyer said “PULL THE POST!” and it was determined the work was ‘transformative’ under the “Fair Use Act”, which protected them / her and the coinciding articles (which came from momentum of the post covering the ordeal) made ME out to be the bad guy. WHY? Anyone with eyes can see… anyhow, this is a rant how WE ARTISTS are taken advantage of, and how laws protect everyone except for who they should, as you can see in THREE of my pieces … anyhow, I’m not thrilled. Pass along if y’all agree (maybe we can build momentum?)
Thanks,
Danny #

Not being a copyright lawyer myself, I have no idea if the work is transformative or not, Danny posted some sample and you can take a look yourself. This is one of Maddona’s instagram posts:

Here is a comparison chart that Danny made: 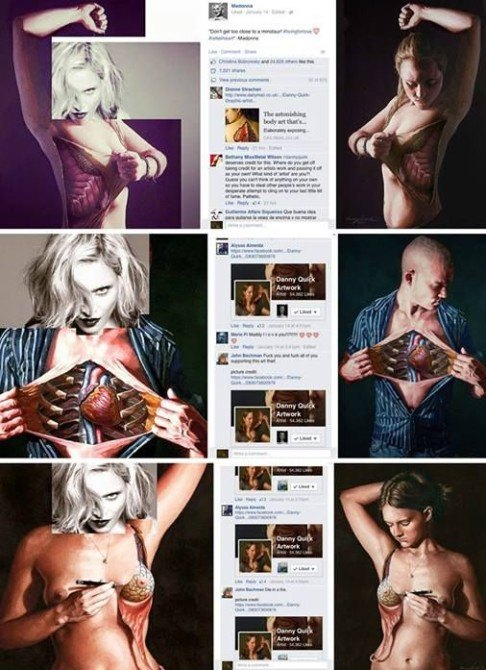 I am not sure what is the moral of the story, but I would like to see this go to trial with equally expensive lawyers on both ends.

P.S. we shared a story that challenges Fair Usage when Richard Price used other people’s Instagram photos to make them into his ‘art’.