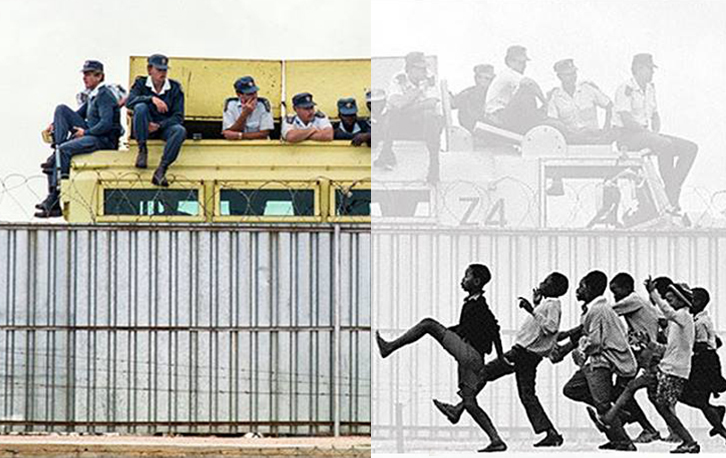 Last week, South African photographer Graeme Williams was surprised to see one of his iconic images at Johannesburg art fair credited to someone else’s name. American artist Hank Willis Thomas took Williams’ photo, altered it, and exhibited it as his own work. And it was being sold for $36,000: 30 times more than the highest amount Williams ever got for it.

Williams took the photo in Thokoza in 1990 during a Nelson Mandela rally. It happened a few weeks after his release from prison, and the image was “heralded for capturing the sudden shift in power away from the apartheid system,” as The Guardian describes it. The photo has been published and exhibited all over the world many times, the photographer writes.

Last night at the opening of the Johannesburg Art Fair, I was disturbed to find a displayed image of mine credited to…

The original image is in color. Hank Willis Thomas removed the color, brightened the part of the photo, and called it his own. According to The Guardian, he defended his act “by questioning whether Williams can lay claim to ownership:

“If a photograph is 25 years old, 40, 100 years old, of public events where most people who are in the photograph are not given control over how they’re depicted and what’s happening, when is it ours as a society to wrestle with? I think of it as more akin to sampling, remixing, which is also an area that a lot of people said for a long time that rap music wasn’t music because it sampled.”

Reportedly, after Williams complained to the gallery, the work was removed. Thomas has reportedly agreed not to display it publicly because “Graeme’s feelings matter to him.” And according to Williams, the artist offered a solution. Thomas called Williams and offered his “artwork”, proposing that Williams keeps it in his home for a year. After this, they would reconnect “to discuss ‘the problem’ further.”

“Presumably it will take a year for me to fully understand the depth of his creative input and the complexity of the changes that he has made to my image. I declined the offer.”

The whole case reminds me of the time when Richard Prince used other people’s Instagram photos and sold them for $100,000. A few photographers sued him after ripping off their photos, and the federal judge refused to dismiss the case.

Many people have advised Williams to file a lawsuit against Thomas for using his work without permission and profiting from it. In my humble opinion, he should go for it. I don’t think this image is a “remix.” It’s exactly the same photo, only with some colors and brightness changed, and sold under someone else’s name for a much higher price than the original.

What do you think? Remix, or plain plagiarism?