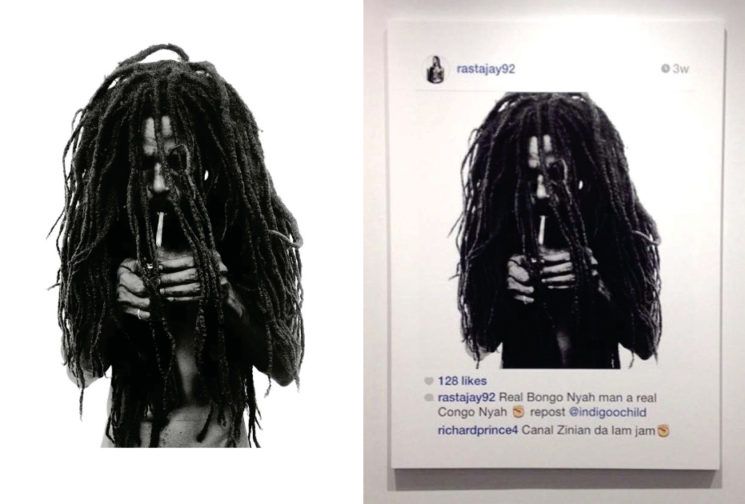 I assume most of us will have a hard time forgetting Richard Prince making a fortune from selling other people’s Instagram screenshots. Photographer Donald Graham decided to file a lawsuit when Prince ripped off his image without permission. Despite Prince’s attempts to get the court throw out the lawsuit – the case goes on.

Last week, a federal judge in New York officially refused to dismiss the charges against Prince. According to the New York Times, this case could set an example of how the fair-use rules relate to Instagram, and it was about time.

In 2014, Prince set up an exhibition called “New Portraits” at the Gagosian Gallery. He exhibited unchanged photos of various Instagram users and sold them for $100,000. The only effort he made was to add his own Instagram-style comment underneath each photo, and as expected – this caused a lot of controversies.

Not all ripped-off artists filed a lawsuit. For example, Doe Deere didn’t plan to go after Prince, even though he profited on her photo he used without permission:

However, Donald Graham decided to take action and sue Prince over the use of his photo “Rastafarian Smoking a Joint.” As the New York Times reports, he first filed a cease-and-desist order against Prince, and in 2015 he filed a lawsuit.

Since then Prince, the Gagosian Gallery, and its owner Larry Gagosian tried to get the court dismiss the case. They claim that Prince’s work was “transformative,” which means it didn’t infringe the fair use. However, the judge Sidney H. Stein discharged their complaints. He writes: “the primary image in both works is the photograph itself. Prince has not materially altered the ‘composition, presentation, scale, color palette, and media’ originally used by Graham.”

Richard Prince didn’t seem to keep his cool after the judge’s decision. He tweeted (and then deleted): Phony fraud photographers keep mooching me. Why? I changed the game. &their wizardry professorial boredom keeps coughing up a vick’sVAPOrub. Has the “Phony fraud photographers” made you cringe? He also retweeted the art critic Jerry Saltz, who is apparently on his side (and seems ever more annoyed than Prince):

ALL the crap fake artists who cry, whine & sue other artists have no idea what art is, that copyright is dead & will die never knowing art⚫️

Anyone can take ANYTHING from me. YOU can publish MY work as YOURS; make $ from it; change it. Artists use materials. Writing is material.

Despite the judge’s decision to go on with the case, Prince’s lawyer Joshua Schiller stated that “the judge applied the wrong standard” and that they “will be able to show fair use.” I wonder how they plan on doing it, and I sincerely hope they won’t succeed.

« Rode’s new VideoMic Pro+ turns on and off with your camera and runs for up to 100 hours
This brilliant music video has no VFX, only a tiny camera on a huge set »