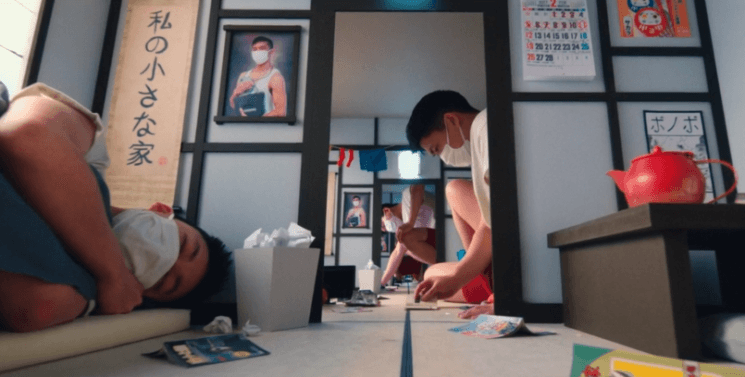 I often stumble upon the music and videos that take my breath away. This happened with Bonobo’s song “No Reason,” and the video that follows it really left me speechless.

Watching this video, you’ll be sure there were special effects involved. However, the director Oscar Hudson used no VFX whatsoever. He used a tiny camera, a huge set, and only two takes to create this fantastic work. He came up with a great solution, both technically and in terms of storytelling. And the video simply makes you watch it until the end. And then once again.

The video illustrates Hikikomori, a concept coming from the Japanese language. It denotes agoraphobic young people who never leave their apartments, feeling overwhelmed with the outside world. Hudson wanted to depict this feeling by creating a set of rooms that seem to shrink around the young man, becoming more and more claustrophobic. As he told Promo News, he was inspired by Si Green’s (Bonobo) feeling of alienation he had during the long tours.

As the director says himself, it would have been much easier to simply use CGI. However, he decided to do it the hard way and make everything in-camera. So, the crew created a huge set, consisting of 18 rooms, and nearly 100ft in length.

Hudson describes the process on Promo News, saying that they chose a small camera and rigged it to a flat base plate of wood. They covered the under side with downward-facing carpet, and finally laid a smooth line to drag the camera across:

To keep it in a straight line and to hide the tow wire we cut a one illimeter-wide groove into the floor all the way down the middle of the set and had two nails coming out the base of our camera unit to keep it sliding in the groove. The wire was then attached to the front nail and the camera could then be mechanically wound in from underground whilst the wire could remain hidden.

In the video, there are no special effects at all. Everything was created in real life, on set and in-camera. There were no multiple edits and cuts. The whole video involves only the slide forward and the slide backward, and one match cut.

Thanks to the same haircuts, clothes, and the pollution masks, the actors all seem like the same young man. In reality, there were ten of them on set, which you can see in the BTS video, along with some other details:

I must say once again I’m impressed with both the idea and the execution of this video. Combined with Nick Murphy’s distinctive voice, for me, this was a real treat. And how do you like it?

[Bonobo: No Reason via No Film School; Promo News]

This music video was made without VFX, using 2,250 printed photos