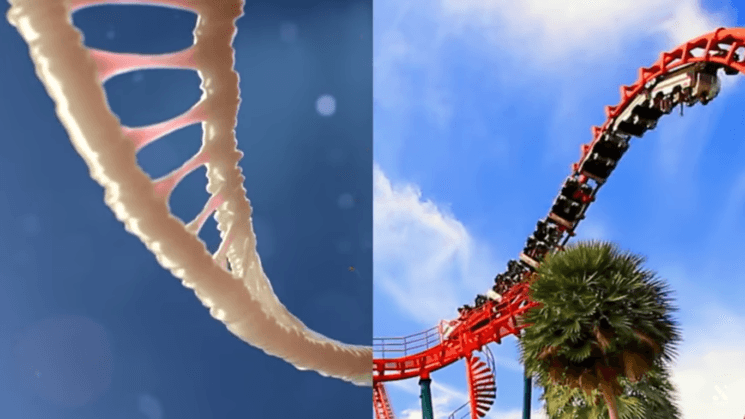 The song Go Up by Cassius begins with the words “Everybody, close your eyes.” But you should do exactly the opposite. Keep your eyes wide open and watch this creative video that follows this song.

The entire video is created from short sequences of videos displayed two by two. And every pair is connected as a diptych to form an entirely new context. It brings together the things you couldn’t imagine together. Some of them are funny, some absurd, some are even cheeky – but all of them are very clever. I have to point out that there is some nudity as well, so you probably don’t want to play it near your kids or at work.

The video is directed by Alexandre Courtès and produced by DIVISION from Paris. It reminded me a bit of the HalfHalfTravel project. I know, it’s not exactly OK Go, but it’s still one of those videos I couldn’t stop watching, and I watched it several times. I like the concept of taking footage that already exists and rearranging it into something new. It’s one of the forms of creativity that often amuses me and I enjoy seeing them.

Some of the comments suggest that the video is offensive and that it mocks some Christian symbols. Personally, I don’t see it as mocking anyone or anything, I just think of it as artistic freedom and fun. But of course, I may be wrong.

As you can see, Cassius, Cat Power & Pharrell Williams perform the song. Whenever Pharrell Williams is involved, I know the song invites for a dance. So, when you’re done watching the video, you can close your eyes as the song suggests and dance a bit around the room. After all, it’s Friday.

So, do you like this video? And do you think it’s offensive or it’s not aimed at mocking anyone?

[Go Up via Gizmodo]