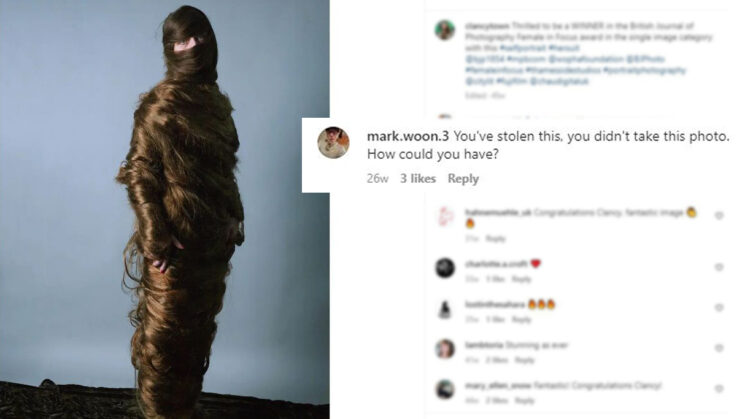 Photographer Clancy Gebler Davies won the British Journal of Photography (BJP) Female in Focus Award last year. However, her winning sparked some controversy after another photographer accused her of, well, basically stealing the photo. He claimed that it was he who actually took the shot, and it resulted in the winning image being withdrawn from the Awards completely.

Gebler Davies posted on her Instagram that she was “thrilled to be a winner” of the BJP’s Female in Focus award. Her photo titled Hersuit took first place in the single image category with a self-portrait showing the artist wrapped in hair. Or at least she said it was a self-portrait.

Photographer William Corbett accused Gebler Davies that the photo she submitted to the contest was actually his. He claimed that he pressed the shutter button on the camera for Gebler Davies, but also that he had made creative decisions that led to the final image. So who’s in the right?

“He was paid to press the shutter because I couldn’t”

Speaking with PetaPixel, Gebler Davies said that Corbett did press the shutter, but that was all he did. She said that he had “absolutely no editorial input whatsoever.” She said basically that Corbett was merely acting as a remote shutter since she was wrapped in hair and unable to press it herself.

“He was recommended by two male photographers friends and I explained it was a simple studio shoot of me in costume that I would be directing. He told me he could do that,” Gebler Davies said. “Just to be crystal clear, he had no involvement in the concept, planning, or finance.”

“It was a conscious decision not to use a remote shutter, and shoot it myself. It would have changed the nature of the image,” Gebler Davies said. “It shows Corbett’s total misunderstanding of photography that he cannot grasp that this is my work and that it is a self-portrait. He was a technician paid to press the shutter because I couldn’t.”

After winning the award, Gebler Davies says that BJP phoned her and said that another artist claimed that it wasn’t her work. Therefore, they decided to strip her of the award and remove all reference to it. “At one point the BJP awards manager even asked if Corbett identified as female,” Gebler Davies told PetaPixel, “as she said that would have solved the problem.”

BJP reportedly refused to comment publicly on the scandal – but William Corbett didn’t. As one might expect, he is telling a different story from Clancy Gebler Davies, claiming that her version is “complete fantasy.”

“She didn’t make any of the creative decisions”

“She was wrapped in the hair for eight hours. She didn’t choose the lens, camera, ISO, or shutter speed,” Corbett claims. “She didn’t make any of the creative decisions. She’s made a complete fool of herself.”

“I’ve been a photographer for nearly 40 years, the idea that she hired me as an assistant is laughable. I used to do hair stuff for all of the top stylists. It was two years ago, if she’s still trying to grind the axe. She’s deluded.”

Who’s in the right?

Naturally, the whole drama left Gebler Davies sad and disappointed. “Winning in Female in Focus in the Single Image category should have been a major moment in my career — something I could build on” the photographer said. “It has been pivotal — but for all the wrong reasons.”

Speaking to The Times, an intellectual property lawyer said that the rights of authorship depended on the level of Corbett’s involvement with the shot. In other words, if he had a significant creative input, then the copyright to Hersuit would belong to him. But if he was indeed only there to press the shutter and Gebler Davies directed the whole concept, lighting, shoot, poses… Then she owns the image. For now, all we have is the word of one photographer against the other, and it’s really difficult to determine who’s in the right. You can choose whom to believe, and something tells me that this isn’t over.