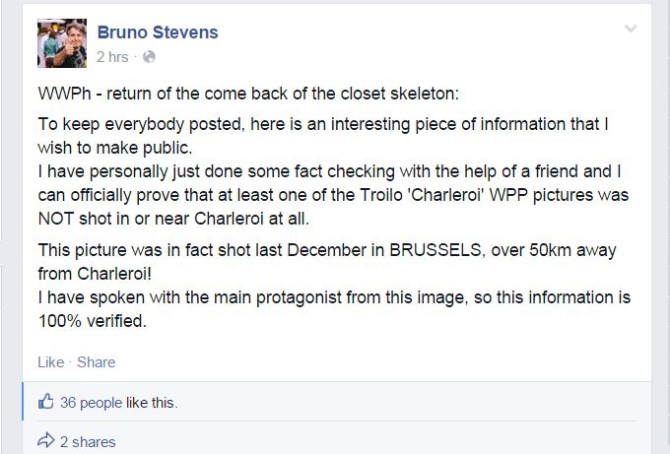 The saga of the World Press Photo competition just won’t quit. At about 3:30 PM EST time on March 3rd, photojournalist Bruno Stevens made an announcement on his private Facebook page claiming he has proof at least one of Giovanni Troilo’s winning photos was not taken in Charleroi, Belgium where the poignant documentary photo series was said to depict. Stevens took it upon himself to do some investigating into the matter. He claims to have spoke with one of the protagonists from the photo who told Stevens the photo was taken in Brussels, which is about 50km (30 miles) away from Charleroi.

At this time it is not clear exactly which image Stevens is claiming has been falsely labeled.

Stevens has been working as a photojournalist since 1998 and has won several WPP awards throughout his career, which does help to establish some credibility to his claims.

We have reached out to Stevens, Bleasdale, and the WPP for an official statement regarding the matter; however, at the time of writing, none of the contacted parties have been available to speak with. It is not known how or if WPP will be addressing the matter.

The Photography Show is underway despite COVID-19

« Canon Shows Off with “Prestigious Accolade”. Actually It Is Rather Embarrassing
Weasel Gets The Ride Of His Lifetime While Clinging To The Back Of A Flying Woodpecker; Expert Says It’s Real »