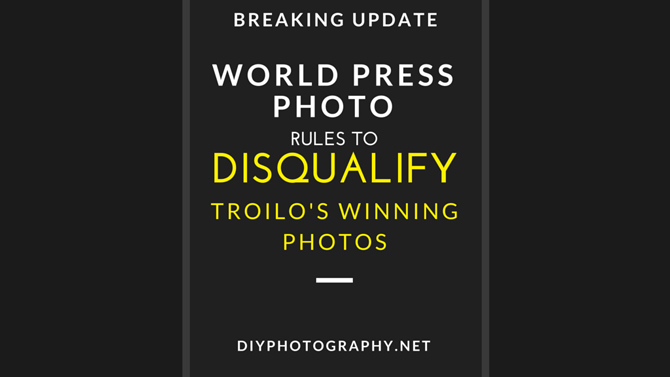 As of  4:22 PM EST, the World Press Photo competition has decided to disqualify Giovanni Troilo’s first-prize Contemporary Issues story. After we reported yesterday that a claim against one of Troilo’s winning images was taken outside of Charleroi, WPP opened an official investigation on the matter. After speaking with Troilo, they have confirmed that the photo which depicts a painter working with live models had been actually been taken in Molenbeek, Brussels. In a press release, WPP explained:

“…Troilo confirmed over telephone and email that the image had not been taken in Charleroi, contrary to what he submitted to the contest. This falsified information is a violation of the 2015 Photo Contest entry rules. In accordance with the judging procedures, which state that a single image or story/portfolio that has been awarded a prize will be disqualified if proven to be not in compliance with the entry rules, World Press Photo has made the decision to disqualify the story.”

The WPP has also confirmed that the second and third place entries will now move up a position in standings and will be rewarded with a first and second prize, respectively. Due to the circumstances there will be no third prize awarded. In the press release, Lars Boering, managing director for World Press Photo recognized the vast amount of controvery surrounding Mr. Troilo’s entries. He explains WPP stood by their initial decision to not disqaulify the photographer, as there was no clear evidence the photographer broke any rules. “We took these questions seriously and we understood what was at stake. We wanted to be certain without a doubt,” Boering said. He added that the WPP competition relies, in part, on trust between competition panelists and the photographers whom submit work. “We have checks and controls in place, of course, but the contest simply does not work without trust. We now have a clear case of misleading information and this changes the way the story is perceived. A rule has now been broken and a line has been crossed.” In closing, Boering noted the mixed reactions the organization had been receiveing over the matter in the past week and as a result, is proposing a debate take place regarding “the definitions of press photography, photojournalism and documentary photography.”

Speaking on behalf of WPP, Boering stated, “We find ourselves right in the middle of this debate, and we aim to use this as a learning experience, to give focus to the discussion and bring it to the next level. In order to do this, we are organizing a discussion about image integrity that will take place during the Awards Days in Amsterdam and we also plan to hold a debate about ethics in the profession during the same event at the end of April.”

You can read the entire statement on the World Press Photo website. It is refreshing to see WPP step up to the plate to make right by this years competition, but also take the appropriate steps towards a more solid definition of ethics of photojournalism.

Correction: This has been edited to correct a typo which implied the second and third place finalists would not move up rankings. In fact, the entries will indeed take over 1st and 2nd place; however, there will be no 3rd place finalist.

At What Point Does A Nude Photo Become Pornographic? Controversy At MOCA Jacksonville