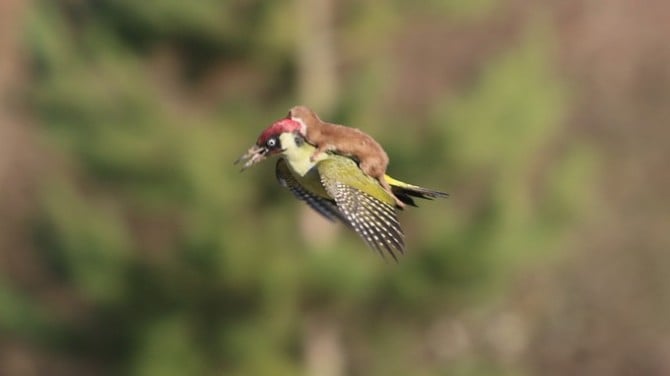 East London resident, Martin Le-May captured a once in a lifetime event while visiting Hornchurch Country Park with his wife in hopes that she would be able to see a green woodpecker for the first time. They were not disappointed. After hearing a distressed squawk, which was promptly followed by a quick green flash. He pointed the bird out to his wife as they both focused their binoculars on the bird, still unclear of all that they were in store for.

Le-May watched the bird thrash around for a moment and as he was switching from his binoculars to his camera, the bird took flight. At this point, Le-May realized the bird was attempting to fly away from a predator. Now able to take a good look at the flying bird, he noticed the bird’s attacker, a wily weasel, was now clinging to the bird’s back as it flew through the air.

He described the spectacle to ITV:

“…As we walked we heard a distressed squawking and I saw that flash of green…Both of us trained our binoculars and it occurred that the woodpecker was unnaturally hopping about like it was treading on a hot surface. Lots of wing flapping showing that gloriously yellow/white colour interspersed with the flash of red head feathers. Just after I switched from my binoculars to my camera the bird flew across us and slightly in our direction; suddenly it was obvious it had a small mammal on its back and this was a struggle for life.” 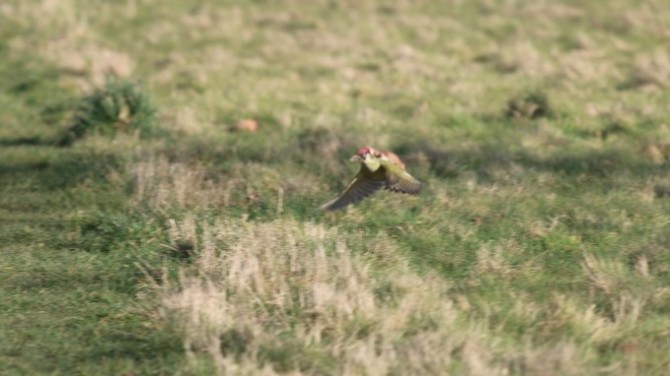 Le-May told the press the woodpecker landed in about 25 meters in front of him and his wife. As the weasel was taking in it’s new surroundings, it became distracted by the couple. The woodpecker used the opportunity to fly away to safety, this time sans weasel. “Quickly the bird gathered its self respect and flew up into the trees and away from our sight. The woodpecker left with its life, the weasel just disappeared into the long grass, hungry.”

And in case you wondering, the average weight of a weasel varies between 1.3 to 8.8 oz for a male or 1.0 to 4.1 oz for a female. A typical green woodpecker weighs in at 6½-8 oz. It is not uncommon for a weasel to eat birds, but this particular weasel’s dinner date had an incredibly rare surprise in store for him.

UPDATE: As this image makes it’s way around the internet, there have been many acquitstions that it is “fake”. While I personally can not vouch for it’s authenticity, an expert image researcher by the name of Hany Farid has stepped forward and says the image is most likely real. National Geographic shared his findings, here. Farid’s Dartmouth University lab has been “focused on developing techniques for detecting photo tampering” for the past 16 years. He is also the co-founder of Fourandsix Technologies and  izitru.com, two websites which provide users with a means of analyzing a photo for authenticity. 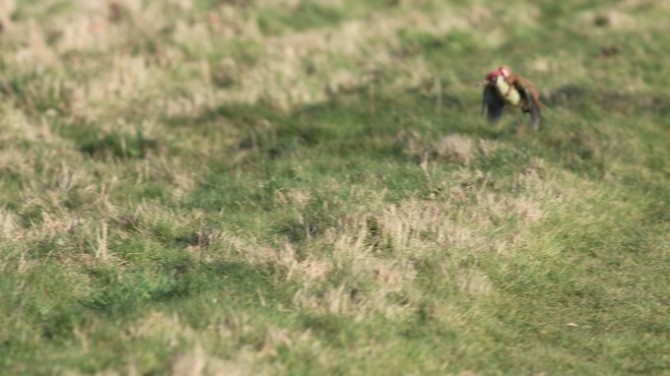 Given the manner in which the weasel is “hugging” the woodpecker, Farid says it would be very difficult to forge. “This would have required a nearly perfect and coincidental alignment of the two animals in their original photos so that they could be composited together,” said Farid. “This type of forgery is therefore more difficult to create than, for example, two animals simply standing side-by-side.”

There are also no visible differences in the lighting, focus, etc between the two animals. There are also several other photos of the pair flying through the air, that Le-May has made public. (Check out the ITV link to see them). Farid concluded, “Combined, I don’t see any evidence that the photo is not real.”