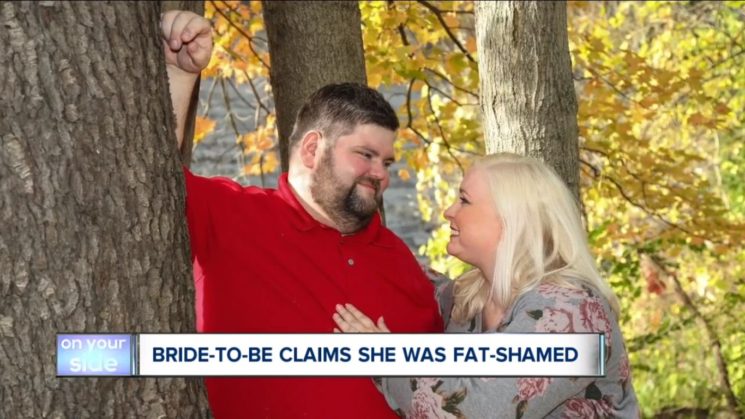 The extent to which we retouch photos can sometimes end up in a huge misunderstanding. This is exactly what happened to an Ohio-based wedding photographer. She photographed a couple and made them noticeably thinner in Photoshop. This caused the bride to accuse the photographer of fat-shaming. But it’s not all: the photographer had her side of the story about the “difficult clients,” which she shared on Facebook. Her rant reached the clients and caused an even bigger mess.

As News 5 writes, the client Katie Liepold turned to Facebook to find a photographer for her wedding in May. She reportedly got about 20 responses, one of which offered an engagement shot along with covering the reception for $600. Liepold and her fiancé accepted the offer and scheduled the engagement session.

According to Liepold, the engagement session was going well, as the couple and photographer “laughed, talked, joked, and shared stories.” However, after receiving the images, she realized they weren’t what she was hoping to get. She tells News 5 that some of the photos were blurry and some were taken at weird angles. But one photo particularly caught her attention. When she compared the photoshopped photo to the original, she realized that the photographer “took like 30 pounds” of both her Liepold and her fiancé. You can see in the side by side comparison that the couple was indeed made to look thinner: 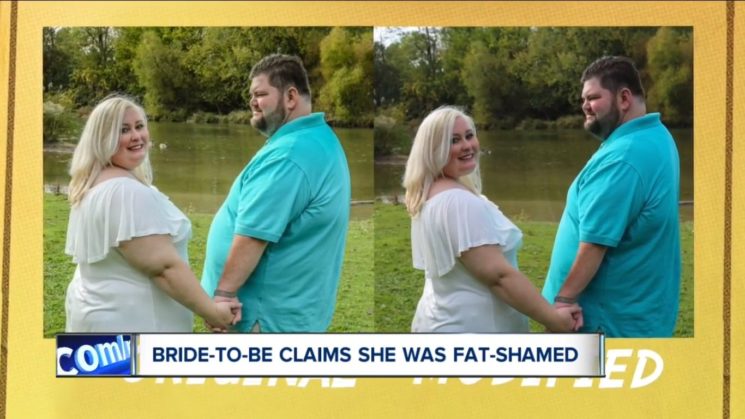 When she noticed this, Liepold immediately contacted the photographer. She said that this kind of editing “wasn’t asked for” and she felt hurt because “her pictures weren’t good enough to be left alone.” The photographer responded to the complaints, saying that they can cancel the contract. Reportedly, she refunded Liepold but kept the $150 deposit because she spent two hours taking their photos.

However, the story goes on. A few days after the complaint, the photographer posted a rant on Facebook. Reportedly, it was in a private group for photographers, but it somehow got to Liepold and made her even more upset. In the post, the photographer told her side of the story, but she was pretty harsh, to be honest. Her Facebook rant has been deleted since, but here’s what it read:

And people wonder why I scaled back on my photography business. Last week I did an engagement session for  morbidly obese couple. Just from the way they were “picky” about certain things during the session I knew they were going to be a PITA. First of all, their 4 unruly dogs had to be in the pick next to a lake of course which of course had ducks. Ugh. Then their truck had to be in the pics. Of course it was parked in the direct sun because there was no shade anywhere to be found. It had DISASTER written all over it.

She “loved” the preview then picked apart the images once she got them. Even though the contract says they get delivered on a disc she then asked for a jump drive. No problem.

I simply sent her a message and offered to void the contract or the wedding since she only liked “25%” of the 110images I delivered. I told her I just wanted her to be happy with her wedding images. Problem solved? Um no. I forgot to remove the grass and the mudstains from his pants. And of course, they didn’t like the lighting in the truck pics even though I told them they were squinting.

I wish whomever ends up with these two good luck. It is extremely difficult to get Pinterest worthy lovey dovey pics when people can’t even get their heads close to each other.

First pic she was upset I gave her a chin tuck. Second pic was as close as their heads can get without straining.

Oh yeh… She left me a s 2 start review because I wouldn’t refund their $150 for a 2 hour session. I’d rather have the bad review than deal with her any further.

Along with the rant, the photographer also posted the photos she took of the couple. This caused a lot of people to react, telling her that it’s rude and that she should be ashamed of herself. Later on, she deleted the post and apologized. She explained that she was not trying to fat-shame the couple and that she never does that to anyone. What caused her frustration was “unrealistic expectations on their part.” She added that she is overweight as well, but in the case of the couple, the weight was the issue that “led to the difficulty in shooting the session and getting creative with posing.”

This case led me to a lot of thoughts, and I can’t clearly pick sides here. As for the couple, I understand their frustration and disappointment if they didn’t like the photos. I can also imagine what it feels like to see your photos overly-edited. It can make you feel as if you’re not good enough.

As for the photographer, I can understand her frustration if the couple were difficult to work with and too picky. But posting a rant on Facebook along with the photos… That can’t possibly end well. Even if you post in a closed group or you just for your list of friends, you never know. In situations like this, it’s always better to just call a friend and talk to them.

When it comes to over-editing the photos, I can’t either defend her or blame her. I believe she meant well and wanted to get the best results. But physical appearance is a tricky thing to edit. It would probably have been safer to talk to the clients and agree on the extent of editing in advance. Maybe it’s a sensitive topic to discuss, but I believe it’s safer than just make assumptions and then go through a fuss like this.

« I created this low-budget set with DIY props for less than $75
How I “scanned” old negatives with $0 budget, a DSLR and stuff I had at home »