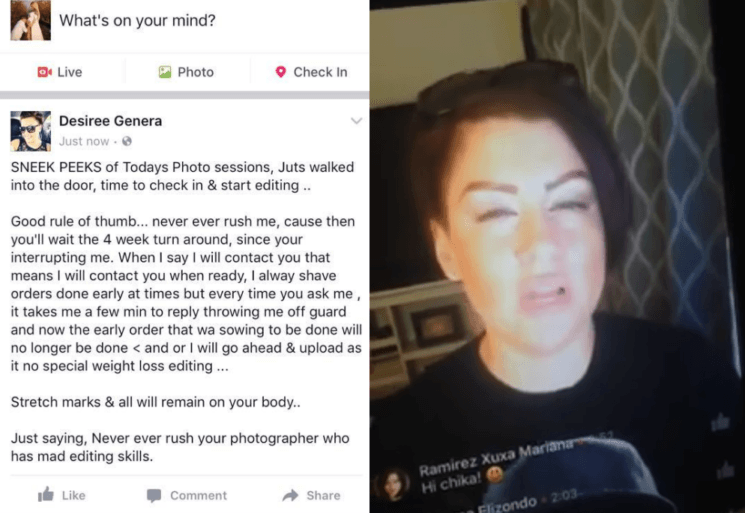 A story I recently saw in one Facebook group is an example how NOT to treat your client, EVER. After a maternity shoot, photographer Desiree Genera publicly bashed on her client Katrina Ortiz. She recorded live Facebook videos, calling her out for her looks, among other things. And it all started with a simple message.

After the shoot, Desiree gave Katrina the date when she was going to deliver the images. When Katrina contacted her on that day, to make sure the photos would be ready, Desiree completely lost it. She first sent angry messages to Katrina. And then, she recorded a few live videos, thrashing Katrina for “rushing her” and calling her out for her “fat thighs, stretch marks, cellulite, and the wig.”

This is the message Katrina sent to Desiree on the evening when she was supposed to get the photos, along with the response: 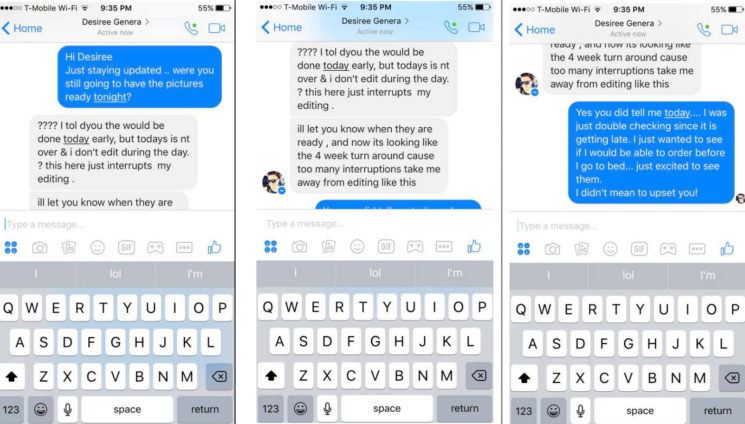 And as if it wasn’t enough, Desiree recorded several live videos on Facebook, calling out on Katrina.

I felt embarrassed just watching these videos and listening to this photographer.  I don’t know if she’s led by the logic that bad publicity is still publicity, or she has issues she can’t deal with. Either way, this is by no means the way to treat your client. Or anyone, for that matter. I think you shouldn’t be this rude even if the client is a total pain in the neck. Not to mention that Katrina was far from that when she sent her the message.

Also, calling out on anyone for their looks is far beyond my level of understanding. I thought we left that kind of judgment in the elementary school. And calling a pregnant woman fat is disrespectful to the level I can’t even express in words.

Other than Desiree’s behavior, another thing really bothers me here and makes no sense at all. She freaked out because Katrina “rushed” her, and then she recorded videos and posted photos of Facebook to trash her. So, she doesn’t have time for editing, but she has time for trash talk.

The community reacted fiercely, calling out on Desiree for her attitude and behavior. Someone even dug out another story about her, which confirms that she’s highly unprofessional. Some people suggested Katrina to file a lawsuit because this is cyberbullying. Others left negative reviews for Desiree on Wedding Wire, reducing her rating to rubble. It seems that this story has hit the nerve of many, not just Katrina’s friends. 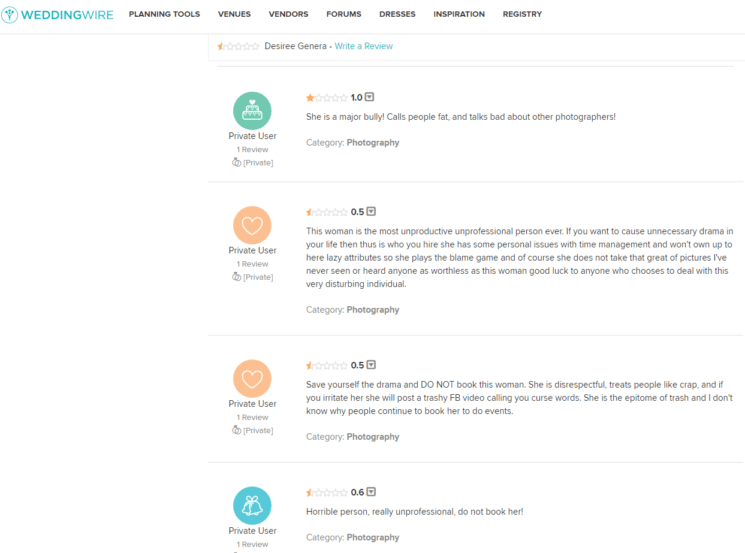 This case has definitely caused many severe reactions all over the Internet. Again, it may be what Desiree was counting on: causing shock and disbelief and getting the attention. But when this is over, she will be left with tons of negative comments and feedback. Any trace of the reputation she’d previously built will be buried so deeply that it will never recover again. At least I like to think that way. I’m convinced nobody would want to put up with this kind of behavior, even if she was the best photographer in the world. Because it’s not just your skills that get you gigs, it’s your attitude as well. And with this attitude, now obvious to the public, I doubt she’ll gain plenty of new clients.

Delete Your Sh!t: Why You Should Trash Most of Your Photos