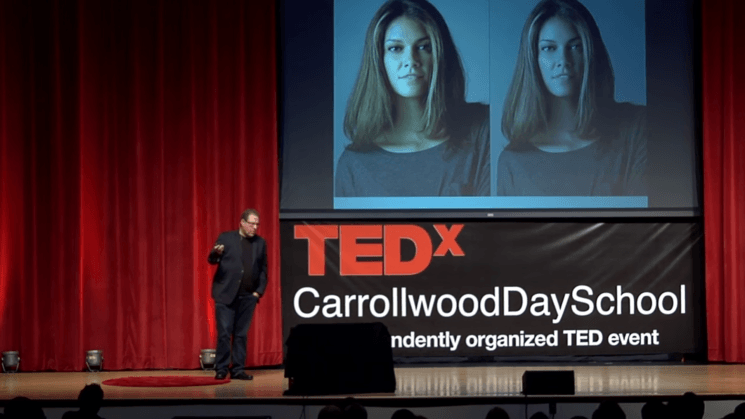 Do you use Photoshop for your portrait photos? Silly me, of course you do. We all do, and that’s fine. But do you draw a line between acceptable and unacceptable amount of retouching? Do you merely emphasize people’s natural beauty, or are you the one who makes them look beautiful? Scott Kelby – photographer, retouchist, the editor and publisher of Photoshop User Magazine, gives a fantastic and inspiring talk on this topic. Why do we retouch people in Photoshop? And do we know what our job as retouchists is?

According to Kelby, while we look at something or someone beautiful, we don’t see the imperfections. He gives an interesting explanation why this is so. While you are standing in front of someone, looking at them and talking to them, you see them in three dimensions. Not only that, but they have a distinct laughter, smile, voice, smell, and I would also say you can feel the specific “energy” each of us carries. But when you open their image on your computer, you have a flat, 2D picture. The photo takes away many distinct features that make someone who they are, and at this point all the flaws become more visible and distracting. And as a retouchist, it’s not your job to make these flaws disappear, because they are also a part of someone’s distinct look.  What you need and can do is only make them less distracting, so that the beauty can emerge. In other words, you should make people look as beautiful in the photo as they were while you were looking at them. Nothing more, nothing less.

Of course, there are instances when you can and should use Photoshop. It’s okay to remove those things no one actually pays attention to in person, yet they distract you when you look at a photo. Kelby gives an example of removing those small veins in the eyes and making the whites of the eyes whiter. Also, it’s okay to remove small imperfections that will disappear anyway, such as pimples.

But, as with everything in life, in retouching it’s also important to know where to draw a line. If we remove personal traits off of someone, we can make them feel insecure and feel bad about themselves. Not to mention that, if we excessively retouch a photo of a client, they might feel unsatisfied with the results. And they have all the right to feel that way, because it’s not really them in the photos.

Most of us hate how we look in the photos, for the same reason we notice the imperfections in the photos of others. We see a 3D image of ourselves in the mirror, and a flat 2D picture full of imperfections when we look at a photo. I recently made a self-portrait and only then realized that I have massive bags under my eyes, which I generally don’t even notice in the mirror. At this age and this level of self-awareness, I don’t really care about it. But there are so many people out there, especially young girls, who hate the way they look and see themselves ugly even though they aren’t. And one thing that largely contributes to their negative self-image is overly photoshopped photos in the magazines. Those people have no eye bags, no wrinkles, no pimples or any other imperfections. They are thin and their skin is smooth. They are just perfect. But you know what? They aren’t.

Kelby gives an interesting comparison in his video. When you see a Wonder Woman or Hulk on the cover of a magazine, you realize it’s just a caricature, a person with tons of make-up and two tons of Photoshop magic. But what many people don’t realize is that photos of celebrities are just the same! They are also there for the purpose of entertainment, and they are created to be more beautiful than they actually are. I don’t say these people aren’t beautiful, but they are far from being flawless.

After all this, Kelby makes a great conclusion and sends out a strong message. As a father, it’s important to him that his young daughter realizes those magazine photos aren’t real, whether they depict Hulk or a famous celebrity. They are both there for fun and for entertainment, and neither of them depicts real life.  If we teach our kids, friends and family to look at these magazine photos and feel they aren’t real, then we’ve done something worthwhile. And as a young woman and a photographer, I can do nothing but agree.

And what about you? Why do you retouch people? Do you think you sometimes overdo it? Do you retouch photos of yourself, too? And do you take time to teach your kids not to compare themselves to the photos of celebrities? I’d love to hear your thoughts and experience in the comments.

Should you re-retouch your old photos?

« Is being a photographer worth losing time with your kids?
The best interview rig ever (for us) »