DIYP has seen its share of interviews, aside our regular work we’ve been to over 10 shows including the latest Photokina. We need a rig that is robust, easy to carry around, and that adapts to various conditions. This rig has gone through many changes over the years, this is what it is now.

Funny fact, on the latest photokina, we went to see the Black magic booth. They featured supermodel Jen Brook, so we went to say hi, and put the rig almost hidden to the side. Interestingly, that rig got more attention that all the Ursa’s and BMCC’s on the booth. 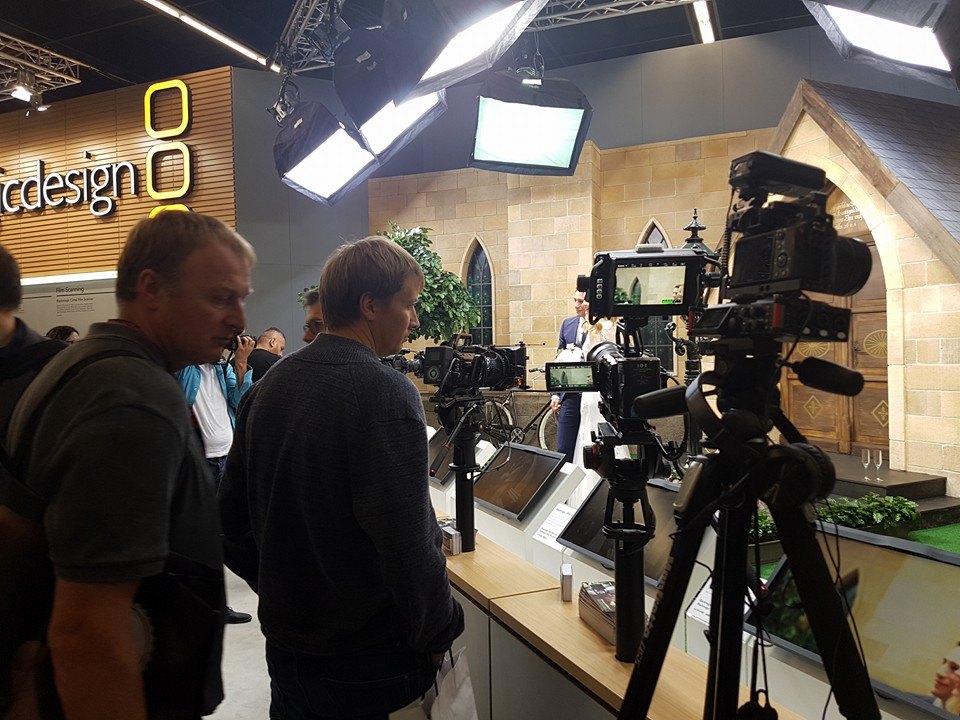 Obviously, this is the kit that works for us. IT has been on many shows and may events with us and we love it to pieces. That said, our needs change, our budget changes, the environment changes, and so does the rig. It grows and shrinks as we learn more, or have different needs. If you have a similar setup, I would love to learn about it, hit us in the comments.

At the core of the system we are using a Sony A7II + 24-70 f/4 lens for video. These are probably not the best in class options for video, but when you look at value for money it’s a great combo. It gives both a good medium shot and can also be used for product shots and B-Roll.

There are two accessories that we use when we are at shows to complement the camera. They are optional, if we run & gun, but for long interview days they became an indispensable part of the kit:

We use the Tascam D70 as our main hub for recording. It sports a 3.5mm stereo jack, and 4 double duty 5mm/XLR ports. There is an ear-set connected to the tascam so the photographer can monitor the sound continuously. It fits in a rather unconventional way under the camera rather than on top of it. This would change the way the camera tilts a bit, but since most of our interviews are shot with a fixed camera, it does not really matter. We have experienced with side mounting it to the cage, and if that ever becomes a need, we can do that too.

For microphones we use three out of the four channels on the Tascam. Channels 1+2 get the input from a Rodemic filmakers kit. That is something that does not change through the day. Its great to pick my voice up when we have a short interview. I’ll also be wearing the transmitter and lav throughout the day in case I want to talk to the camera briefly. On the tascam we set the right a a higher gain than the left channel so we have backup.

If we are doing a long sit-down interview, I’ll hand the microphone to the other person and my voice will be picked up via an interview mic.

The other microphone we use (on channel 3), is a Rode reporter mic. It replaced our previous Audio Technica MB 4K because we got slightly better results and did not have to worry about replacing a battery. Right now, we use the mic with a 5 meters XLR cable, but this will change starting with the next show as we will start using the wireless Rode Newsshooter Kit.

Lastly, there is the in-camera recording which may be used for sync.

For tripod we use a Manfrotto MT055XPRO3 along with an 804RC2 3-way head. It’s a good sturdy tripod. That said it is likely to change. We need better leveling control and to drop some weight. The tripod is 2.5 kilo and is rated for way more weight that we need when traveling.

So, there you have it. The full kit. We are quite happy with it for now, the only thing that is bothering is the amount of weight on this rig. As I said, I’ll be looking for a lighter tripod, but also to replace some of the other gear.

« Why do we retouch people in Photoshop?
Making perfect skies with luminosity masks and Blend If sliders »