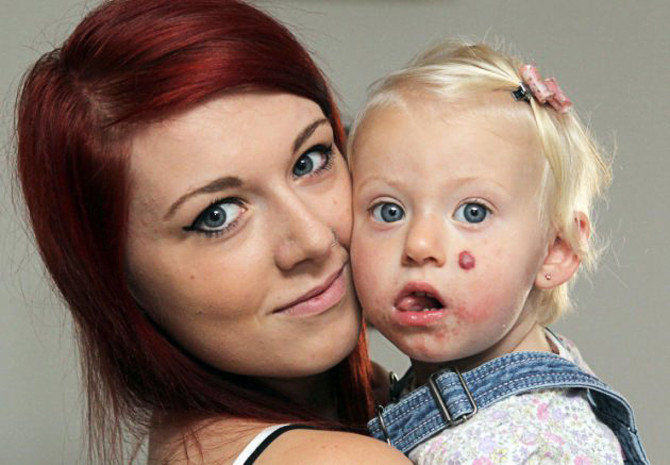 Retouching of images has become a widely-debated topic in recent years, especially in the context of advertising.  But even traditional family photographers run into this issue at times.  Some clients want to be made to look like supermodels, others prefer a more accurate representation, and sometimes photographers are left wondering which case a particular shoot may fall into.

Lauren Holsten took her 18-month-old daughter, Lexi, to get her portrait taken by a local studio in the UK.  Nothing out of the ordinary about that.  However, when Lauren went to pick up the photos from the studio, she was “horrified” to see that they had digitally removed her daughter’s birthmark from her face.

“It’s like that photography company was saying she’s not perfect and she is just 18 months old. It needs to change,” says Lauren, expressing concern that such a photo would make her daughter feel self-conscious as she gets older.  When she confronted the studio about it, the studio said that the shop assistant simply thought it was a cut.

I’ve been in this situation before.  I have had parents specifically request that I remove every bit of baby acne from their newborn’s face or eliminate cold sores from their elementary-aged children or digitally patch up wounds that happened the day before the shoot.  After a while, you just start to remove the obvious bits from the faces of everyone’s children to make the parents happy…and, typically, they are.

But, I have then had parents ask why I removed permanent features and request that I revert the images to a pre-‘shopped state.  I’ve simply apologized for the mistake, made the changes, and the parents were happy and understanding about why I did what I did.

I’ve also had repeats of both cases with adult subjects as well.  It’s just the nature of the beast.

In this case, though, Lauren has taken to publicly shaming the photography studio, apparently oblivious to the parental demands that they deal with on a regular basis.  The studio has since apologized to Lauren and issued a public statement changing their policy.

“We have already changed our policy. We are going to make sure we ask parents about birthmarks.”

Hopefully that will satiate Lauren…

I’m not going to bother asking how many of you receive request to airbrush or “Photoshop” people, their blemishes, and insecurities.  But, how many of you had ever made an incorrect (yet perfectly understandable) judgement call and had a client request the imperfections remain?